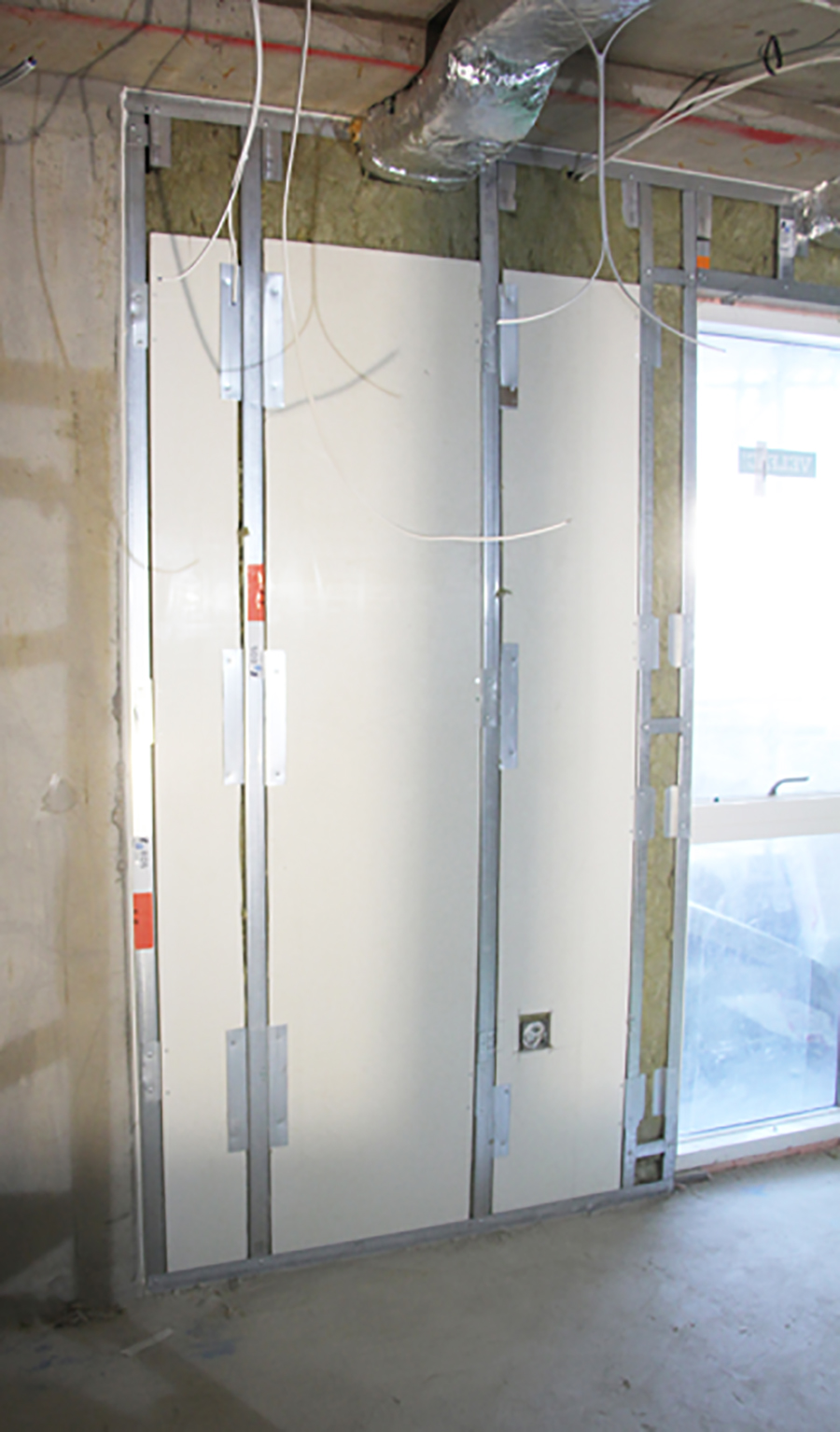 A significant new high-rise residential project in the London Borough of Lewisham is being built to provide high quality social housing, with the design of the structure prioritising the use of non-combustible materials: including the choice of A1 rated Magply boards for pattresses within the external walls.

The development at Creekside in Deptford is being built by C Field Construction and IPE Developments to create a total of 56 one, two and three bedroom apartments, including three specially equipped units on the lower levels of one block for those with mobility issues. Within all of the high specification homes, pattress blocks cut from 18mm sheets of Magply boards, manufactured by IPP Ltd, are being fitted to the reinforced concrete structure’s infill of heavy gauge steel studs by sub-contractor, SCL Interiors.

The pattresses are being positioned to support kitchen cupboards and bathroom units as well as radiators throughout the eight and 10 storey buildings. While this use of the well proven and widely specified Magply MOS boards has already been demonstrated on other multi-storey HMO projects across the South-east and elsewhere, the main contractor and client’s representatives rightly insisted on witnessing a demonstration of the product’s suitability for the application.

The Project Manager for OC Drylining, Errol Ryan, recounted: “Our Construction Director, Rory O’Connor proposed the use of the Magply boards as an A1 certified, non-combustible product as the alternative to plywood which is only flame retardant. We then had to conduct a pull-out test witnessed by C Field’s Senior Project Manager, Dominic Lavin, which involved screwing the radiator brackets direct to the Magply, withdrawing the screws and then tightened them up again. We then put considerable load on them using a claw hammer, which was to ensure the boards would not be weakened in the process. Our operatives are fixing the pattresses to support plates and angles which - in turn - are mechanically fixed to the SCL infill. They’ve found the Magply boards straightforward to fit and the work is on course for completion in May this year.”

Independently certified to offer a range of performance benefits. Magply MOS boards present a fire-safe and environmentally friendly alternative to conventional plywood or OSB products which normally only offer a Euroclass D or E rating. Importantly the pull-out strength for 18mm Magply is in the range 3.45-4.00 Kn/m2.

The different thicknesses of panel are also widely used as a substrate board for the direct application of proprietary render systems, as well as for flooring and flat or pitched roof build-ups.

A spokesperson for the council commented: “Our development department will work with C Field Construction and IPE Developments to complete the project, which will offer a mix of one-, two- and three-bedroom Units within a warehouse style development, plus commercial space at street level. The development is being funded by the London Borough of Lewisham and the Greater London Authority.”

Smart Architectural Aluminium will display a wide range of new products and systems at this year’s Futurebuild exhibition.