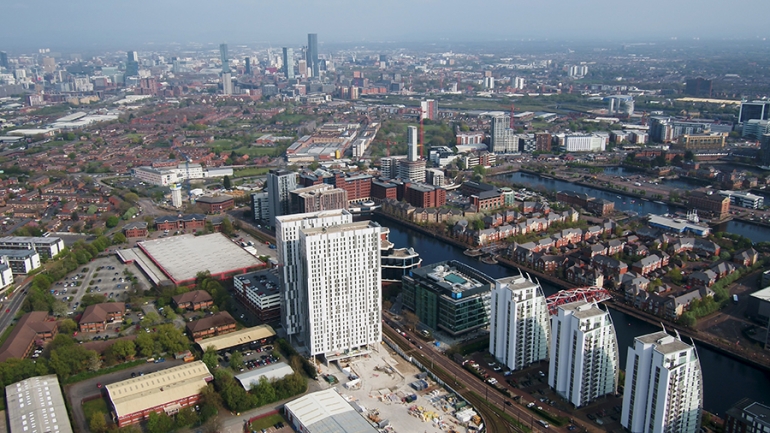 A family-run business established approximately 20 years ago, Staticus is one of the biggest building facade contractors in Northern Europe, with their head office and a factory in Lithuania and offices in Norway, Sweden, Austria and the UK.

Staticus was appointed by Vermont Construction on behalf of X1 Developments to deliver the building facade for Tower One and Tower Two at the Media City development in Salford Quays, Manchester, working closely with FCH Architects.

Paulius Gurkšnys, CEO at Staticus UK, commented: “We were contracted for the Media City Tower One at the end of 2015. We demonstrated that we could deliver a quality product on time, and we signed the contract. We were appointed to design, manufacture and install the unitised facade panels.

“Staticus specialises in unitised aluminium and glass facades – we have completed hundreds of similar projects across Europe. This was, therefore, the system we used for both of the towers at Media City.

“Some contractors use stick facades, but we prefer the unitised system as we believe it offers a higher quality product with far less installation time on site. We believe that unitised panels are the future of facade construction – they are produced in a more controlled environment, and shipped to site for efficient and fast installation.

“We are expanding our presence in other European countries and have recently opened a new office in Austria, as well as growing our business in the UK. One of the reasons our business is booming is because of the excellent and passionate team we have working across the company.

“The great benefit of using Staticus is that we can offer a one-stop-shop for building facades. We have an in-house design team and our own factory in Lithuania which allows us to maintain the highest standard of quality from design to manufacture, on-site delivery and installation, all the way through to our warranty service.”

Chris Gallagher, Operations Director for Vermont Construction, who appointed Staticus for Media City Tower One and Tower Two, explained: “Vermont Construction is a principal contractor based in the north-west of England. We were formed in 2004, predominantly to work in the residential sector, which is the market we operate in currently.

“I came to work on the Media City project in April 2015. I was very interested in the project as it was the largest residential project signed outside of London that year. It was, therefore, very high-profile, and I was intrigued about the organisation and working so close to home.

“One of the reasons we appointed Staticus for this and subsequent projects, was because there was a very straightforward process with them. They met our requirements entirely and unequivocally, which was very refreshing to see.

“Staticus is a different type of contractor. They set themselves apart from their competitors as it’s such an easy process to work with them. They are very forthright and will do what they say they’re going to do – they’re very reliable, and I trust them to deliver works on our schemes.

“Staticus performed faultlessly, and it has secured them further work with us. I would absolutely work with them again. It’s very rare to come across a contractor who has their breadth of ability and delivers – they were exceptional.”

Richard Conlan, Associate Director at FCH Architects, commented: “With this project, we took over the original design from AHR Architects and we were contracted to develop the scheme out to completion.

“This building was the first of four towers, which are of very similar design. It was, therefore, important to try and get the modular size of the facade correct in the first go so that it could be replicated across the four.

“We worked closely with Staticus – we had regular meetings and went over to meet them in their factory in Lithuania. We had a good working relationship with the team throughout the design all the way to completion.

“The Staticus team were very helpful and knowledgeable – everyone communicated well and integrated with the wider design team.

“We are currently working with them on other projects in Liverpool.”

Carl Phillips, Senior Site Manager for Vermont Construction, said: “Staticus provided the complete envelope system for the towers, from the ground floor right up to the 26th floor. I worked with them daily, coordinating with the team from the design stage right the way to the final install.

“The experience I had working with Staticus was an enjoyable one – it was very smooth. They came across as a very professional outfit. The team on site were excellent – we have our set procedures and standards, and they were quite willing to follow that. They were really good at health and safety, and their communication was great, especially at listening to what we wanted as a client.

“I was fortunate enough to visit Staticus’ factory over in Vilnius, Lithuania, over a three-day period. We inspected the manufacturing process, the QA process, and we had a meeting with their senior management – it was very impressive.

“I would absolutely recommend Staticus to another company. In fact, we used them for the facade on Tower Two at Media City, so we’ve had two projects now with them, and they’ve both gone really well for us.

“I think the best thing about working with Staticus is they are very proactive and quick to respond.”

Staticus is growing its UK presence and is already responsible for the iconic look of buildings in Manchester and London, offering a comprehensive facade engineering service – from conception and design through to manufacture, installation and project management.