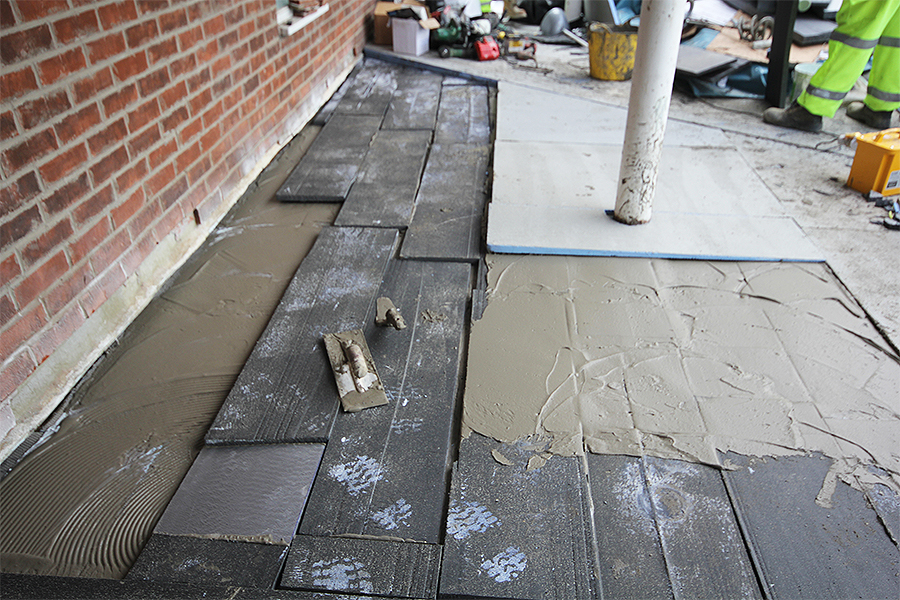 An experienced builder and roofing contractor has made use of some 300 standard and tapered Marmox Multiboards to complete a complex refurbishment of a large, top floor balcony on an apartment building in North London.

Lightwood Construction carries out work for mainly residential clients right across the capital and has used Marmox Multiboards on many occasions in the past for both interior and exterior applications. In this instance, long term exposure to the weather and ponding had caused the original waterproofing system to deteriorate, and leaks to occur.

Having stripped off all of the rotten felt and boarding, Lightwood Construction’s operatives installed 90 sheets of 20mm thick 1250mm x 600mm standard Multiboards, along with 200 of the 1200mm x 1200mm cut-to-falls variant which taper from 33mm down to 10mm: enabling subtle gradients to be created in draining the balcony to multiple outlets.

Managing Director Niaz Choudhury commented: “The old deck had failed and crumbled and had to be completely removed for us to stop the leaks and install new terrazzo/terracotta tiles. We started by laying new marine grade plywood over the concrete and then up to four thicknesses of the Multiboard in order to get the falls to four separate drain points.

We originally started using Marmox Multiboard abut seven years ago for refurbishing bathrooms and shower areas – often tanking the spaces. They are easy to cut and install with the special tape and 360 adhesive. The good thing is, normal cut-to-falls insulation boards tend to compress, but Marmox is higher density so much more stable. No matter how good your adhesive is, if the insulation moves you are likely to suffer cracking. We’ve been through all the products and Marmox is working for us - and we are about to begin a much larger project in Wood Green where the roof deck will see solar panels being installed.”

In completing the repairs to the 14.5-metre-long balcony, Lightwood Construction used 50 rolls of the 120mm wide waterproof tape and 96 tubes of Marmox’s 360 Multipurpose Adhesive, all purchased from Travis Perkins.

The boards have undergone rigorous tests to ensure they are suitable for external use so can be used on the most exposed balconies, as well as inside a wet room.

The board is produced in just one size, 1200 x 1200mm, with the edge thickness tapering from 33mm down to 10mm at the opposite side. They can be combined with layers of 20mm thick Marmox Multiboard to extend the slope indefinitely.