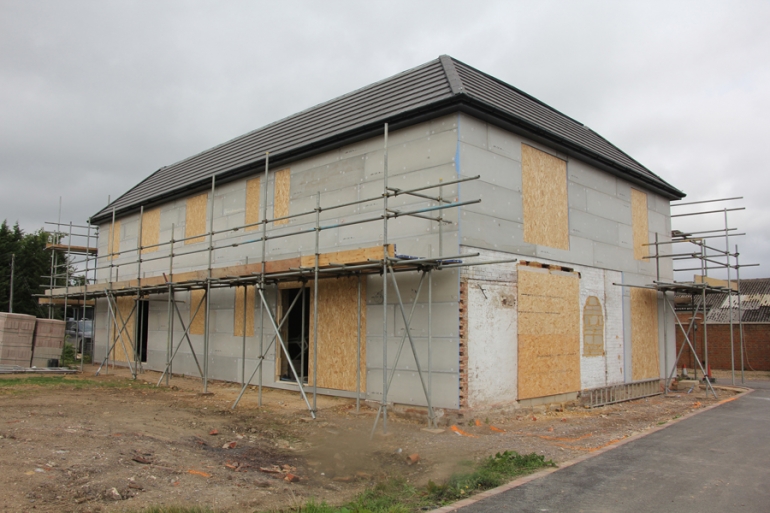 The redevelopment of an unusually large agricultural homestead at a farm in the Surrey commuter belt has seen the main contractor make full use of the technical benefits offered by Marmox Multiboard, in facilitating the creation of an attractive new outward appearance that will deliver low maintenance as well as improved energy performance.

The work on the old seven-bedroom, block and brick built dwelling near Godstone has been led by East Grinstead based Cooke and Charman: converting the structure into a pair of three bedroom homes for the family. Having been familiar with the versatility and insulating performance of Multiboard from using the product for interior work, the contractor sought guidance from the manufacturer regarding its potential as a substrate for rendering.

One of the company’s founders, Charlie Cooke, recounts: “As a company involved in projects across the South-East we undertake a lot of refurbishment work and have used Multiboards on a number of occasions – mainly as a tile backer – so when it came to this conversion we decided they might be ideal to carry the new render finish. The contract is creating a pair of semi-detached, three-bedroom properties, finished to a high specification including greatly improved energy performance standards, where the Multiboards will contribute to bringing the exterior wall U-values up to those demanded by the current Building Regulations. Marmox offered us all the technical guidance we required, including comprehensive installation instructions, and our operatives found the boards very easy to install using the special washers and sealant. We expect to be applying the K-Rend in October or November, depending on the weather, as the job nears completion.”

The local branch of Laker Builders Merchants supplied a total of 154, 30mm thick, 2500 X 600mm Multiboards together with the 90mm long Marmox Dowels which ensure individual panels are held securely and that moisture cannot penetrate through the fixings.

Marmox Multiboards are manufactured from extruded polystyrene or XPS encapsulated in reinforced polymer concrete, available in a range of thicknesses up to 60mm and presenting a variety of positive physical characteristics in addition to being fully waterproof. They are both light to handle and easy to cut, while still being able to sustain substantial loadings if required, such as for flooring applications. Their very good thermal performance further helps to cut condensation risk for interior work where they are widely used in bathrooms and other high humidity areas.