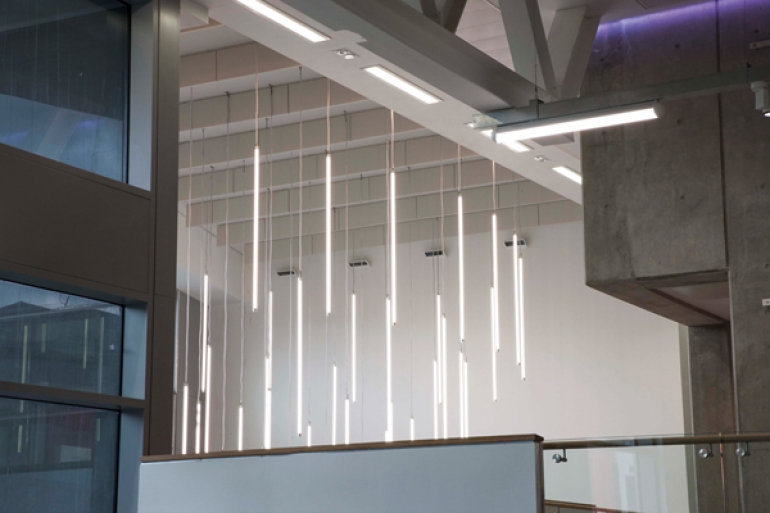 Students starting as the University of Salford in September 2016 are the first intake to reap the benefits of the award-winning New Adelphi Building.

This pioneering, multi-million, seven-storey construction is also known as the Gateway Building because it forms and entrance to the campus from Salford Crescent railway station. It provides a fantastic new home to the Schools of Arts and Media, the Performing Arts, and Music, as well as the School of the Built Environment. In July 2017, Sandy Brown, the acoustic consultancy for the building, was named winner in the Architectural Awards: Education Buildings category by the ANC (Association of Noises Consultants).

Ecophon’s Martin Keogh described Ecophon’s involvement in the project: “Ecophon were approached to work alongside the architect and main contractor in developing the specifications in line with the acoustic strategy. Exposed soffits and a large central atrium with open balustrades can prove very challenging from an acoustic perspective. Solo baffles and direct mount Master F were an ideal combination, giving the aesthetic look required along with the desired amount of class A absorption.” Stride Treglown were the architects of the 1486.45m² new build and responsible for coordination of the design as well as architectural design. Associate Architect, Thomas Sheehan explained why the building needed excellent acoustics: “The building houses the University of Salford’s departments of music, performance, architecture and art. There are multiple acoustically sensitive areas within the building, such as recording studios, theatre, TV studios and performance spaces, as well as sources of noise such as 3D workshops.”

He described the main areas where Ecophon acoustic solutions were installed. “Ecophon have a well-designed family of products, which allow flexibility of design. Solo baffle was installed in the atrium and open plan teaching areas as part of a rhythm of lighting, acoustic baffles and service routes. Master F was used in the atrium and circulation areas, where clear head height and visibility was a priority.

Solo Square helped us to create a ceiling plane allowing service distribution above.”

“The design and installation of the products are straightforward and the Ecophon team was very helpful,” he added. “The end result is a smart appearance and we’ve had some positive feedback on the acoustic performance of the spaces.”

BREEAM recognizes the importance of acoustics in sustainable design and because of this issues credit on having and complying which an acoustic strategy, which usually follows BB93 Acoustic for Schools as a guide. The Adelphi building will achieve a BREEAM ‘Excellent’ rating in line with the University’s sustainability agenda.

The green space and paved areas in Chapman Square will provide a perfect venue for students and staff to relax and socialise outside the building.

“New Adelphi is an inspirational and exciting development which staff and students have embraced with gusto.” Stride Treglown