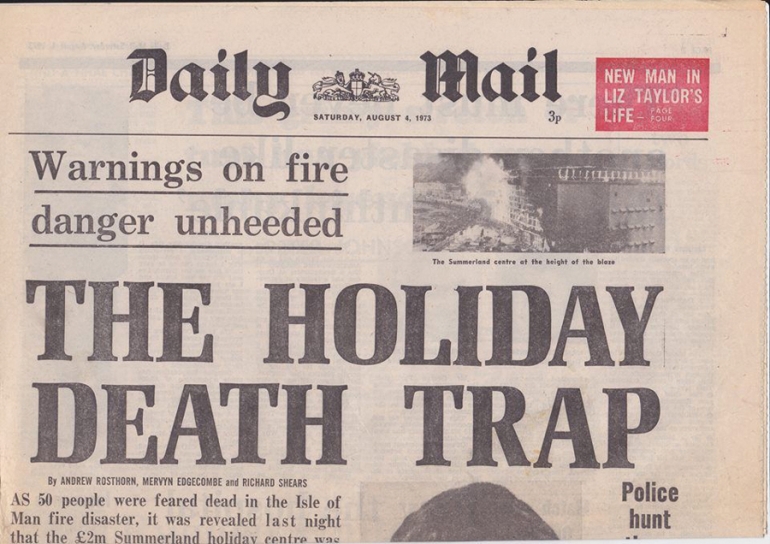 Wrightstyle Limited is an international steel and aluminium glazing company, designing, manufacturing and installing systems to mitigate against fire, bomb/blast and ballistic attack. Jane Embury, the company’s marketing director, looks back at one of the worst fire tragedies in the British Isles.

Last year saw the appalling catastrophe of Grenfell Tower, which will no doubt see the introduction of new fire regulations for the manufacture and installation of external cladding.

Tragically, codifying by catastrophe is nothing new, so it’s worth remembering another fire that happened 45 years ago this August. Until Grenfell, it was the worst peacetime fire in the British Isles since 1929, and the worst disaster in the history of the Isle of Man.

It changed building regulations across the country because, most tragically, poor design and inappropriate building materials allowed a minor fire to become a major conflagration.

The 1973 fire was at the 3.5 acre Summerland resort on the Isle of Man, which advertised itself as the biggest and most innovative entertainment centre in the world. The British Tourist Authority described it as “an outstanding tourist enterprise.”

Designed to attract visitors away from cheap overseas resorts, the centre had an indoor heated swimming pool, saunas, Turkish baths, an artificial sunshine zone, a children’s theatre, an underground disco, waterfalls, and restaurants and bars with live entertainment throughout the day.

One promotion extolled the centre as “a holiday town where it never rains, the wind never blows and the temperature never gets chilly.  Outside it’s raining yet here you are relaxed in your shirt sleeves, gently perspiring in a tropical 80 degrees.”

Year-round artificial sunshine was achieved by a transparent roof comprising acrylic bronze-tinted sheets. There were seven floors in total and the building had a capacity for more than 5,000 people.

For just over two years the waterfront centre attracted visitors from all over the world.  It appeared that the vision behind its creation was working, taking Manx tourism into a bright future. On the evening of Thursday 2nd August 1973 an estimated 3,000 people were enjoying themselves at the resort.

However, three schoolboys on holiday from Liverpool were hanging around at the back of the building next to a dismantled fiberglass kiosk. They were illicitly smoking and the fire they inadvertently set off killed 50 people and gutted the complex.

The small fire in the kiosk triggered a number of fire events. First, the kiosk collapsed against the exterior wall of the building, which contained both asbestos and bitumen – with limited fire-resistance.

Second, this set fire to interior sound-proofing material, which also had poor fire-resistance, causing an explosion which ignited the highly flammable acrylic sheeting which covered much of the rest of the building.

The acrylic then melted, allowing oxygen to flood in and drop burning material inside, starting more fires and injuring people trying to escape.

Third, the fire spread quickly across sheeting on the leisure centre walls and roof, and through vents that were not properly fireproofed. Indeed, some parts of the roof comprised wood-wool slabs with felt and chippings on top.

In addition, the building's open-plan design included many internal spaces that simply acted as chimneys to spread the fire. The subsequent enquiry found that there was an absence of compartmentation in the space above the entrance floor, and a lack of adequate protected escape stairs.

Making things worse, the fire service wasn’t alerted for almost 30 minutes. Because of previous false alarms, Summerland’s alarm panel had been modified to create a delay to the automatic fire brigade alert. The mains wiring then burned through and prevented the alarm from sounding.

Indeed, the alarm was only raised by a ship two miles out to sea which reported that “it looks as if the whole of the Isle of Man is on fire". It was the Coastguard that called the fire service and, at its height, 96 of the island’s 106 firefighters attended the fire and all of its 16 fire engines.

Further compounding the tragedy, there was little or no attempt to evacuate the 3,000 people inside the centre. In a rush to escape, many were crushed and trampled because of locked exit doors. Many others then made their way to the main entrance, causing further crushing.

If that wasn’t bad enough, emergency lighting failed after the main electrical supply was mistakenly turned off and the emergency power generator failed to start.

The main factors in the tragedy – inappropriate building materials, lack of compartmentation and protected escape routes – all came under scrutiny in the subsequent public enquiry.

While no individuals or groups were blamed, changes to building regulations to improve fire safety were introduced nationwide.

Central to those changes were better approaches to contain fire and ensure that escape routes were protected – areas that Wrightstyle, with our advanced steel glazing systems, have particular experience and expertise.

Our compatible systems, with the glass and steel framing systems tested together, are accredited to EU, US and Asia Pacific standards. However, as we always advise: specify the glass and steel as one unit: in a fire situation, the glass will only be as protective as its frame, and vice versa.

Most sadly, with Grenfell Tower firmly in mind, it’s tragic that it sometimes takes significant loss of life to improve building and fire regulations.