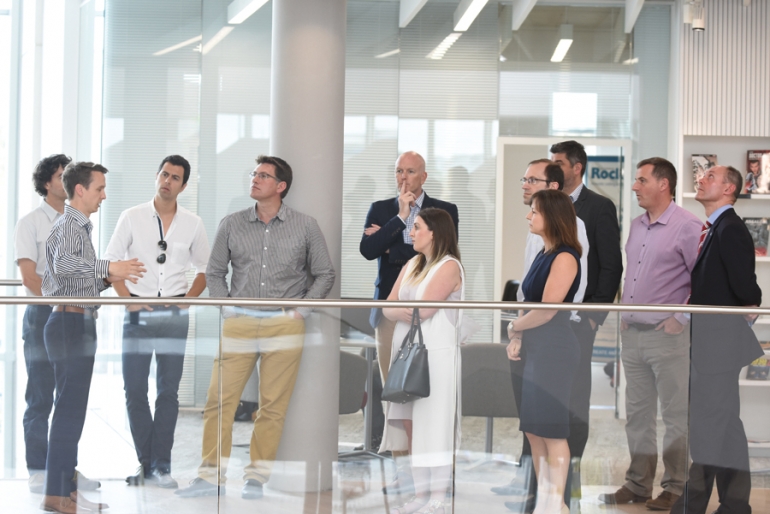 Last month, Rockfon assembled some of the top names in acoustics to discuss the prevailing audible topics influencing today’s architecture. Here, FC&A reports on the findings from the stimulating roundtable held at South Shields’ impressive state-of-the-art cultural venue, The Word. Guided through the FaulknerBrowns-designed building by Project Director Nick Heyward, it was instantaneously evident that; to recognise an acoustically-sound environment, you have to physically experience the environmental change.

s a versatile venue, The Word houses a library, cafe, meeting rooms and a variety of interactive media tables and tablets, to name but a few. In a building predominately used by children, and with a profusion of noise-generating elements, many would assume the building would be a sound-emitting establishment. Conversely, as you walk through The Word’s various offerings – from the lively core of the building housing a cafe and social seating areas to the near-silent library territory – there’s an immediate recognisable audible distinction, transporting you from an energetic, communal space into a soundless, still atmosphere.

Sound insulation, speech intelligibility and sound absorption were all challenges faced by FaulknerBrowns at The Word and, by using Rockfon® Mono® Acoustic, FaulknerBrowns was able to address these difficulties.

When FaulknerBrowns designed The Word, acoustics were considered from the very outset. Decisions such as the children’s learning area being placed at the summit of the building to reduce noise were examined at the conception stage, consideration of how noisy end-users were going to be in certain areas and how this will travel through the establishment were discussed early on and a collaborative approach was triggered between acoustician Apex Acoustics, Rockfon and FaulknerBrowns. This acoustic-focused approach and forward-thinking organisation has proved invaluable for The Word and, as quoted by the panel, has contributed to the 400% rise in library subscriptions at the new Word building.

Chaired by Peter Rogers of Sustainable Acoustics, the roundtable’s opening keynote addressed: “Is it possible to design an aesthetically-beautiful building whilst achieving good acoustics?” Evidently from The Word’s meticulous design, this is unquestionably feasible and the venue represents a clear example that architects don’t have to compromise on aesthetics to acquire accurate acoustics – instead, a seamless marriage between aesthetics and acoustics can satisfy both standards.

However, our love for hard surfaces shines through on many a building, which can potentially have a negative consequence if acoustics are not considered. Two hard surface representatives, Colin Falconer from Welsh Slate and Joao Esteves from Magres Ceramic, discussed the lack of acoustic consideration within their industry, with aesthetics taking main priority when it comes to slate and tiling. However, Nick accurately pointed out that hard surfaces don’t have to compromise on a building’s environment acoustically; rather, the correct balance between hard surfaces and acoustic elements can permit architects to achieve acoustically-sound settings. This is demonstrated through The Word’s flawless fusion of hard surfaces and acoustically-controlled components. As Nick explained: “It’s about allowing for hard surfaces within certain areas of a building and mitigating it within your design.”

Collaboration within the nation

The key is a collaborative approach. With architects, potentially, using materials with great ignorance – an incorrect balance of hard surfaces with acoustic solutions – there’s great scope for the industry to come together to improve acoustics across the board – particularly in the UK.

The explorative roundtable discussed joint efforts across the industry to improve the awareness of acoustics, including CPDs, increasing the acoustic division within the seven-year architecture study and a collaborative approach between hard surface manufacturers and acousticians. Nick explained that, while he learned a lot at university, he personally acquired a considerable amount more acoustic knowledge during placement opportunities.

Nick explained: “Acoustics, more often than not, aren’t the first thing all architects consider – it almost comes as a secondary system.” Today’s acoustic solutions, however, are more versatile – with more designs, colours and shapes providing an acoustic and optically-pleasing solution to complement architectural designs both accurately and visually.

With evidence that acoustics generate greater productivity, designers should be observing audible aspects within buildings further, particularly – as expressed by Jack Harvie-Clark from Apex Acoustics – in our schools; where children are learning the ability to pick up sounds and words and require concentrative hearing to absorb what’s being said.With school acoustic regulations coming into play in only 2003 – which don’t cover universities or higher education establishments – it’s clear to see that more needs to be done to bring acoustics to the fore.

‘Good acoustics’ enable end-users to understand what’s being said efficiently, prevent distractive noises and increase productivity – generating commercial value, particularly in workplaces. And, it seems the UK is falling behind the rest of the EU when it comes to acoustic regulations in places such as the workplace. Jack Harvie-Clark declared that “we’re miles behind others within the EU when it comes to acoustics and we can use their regulations as guidance within the UK”.

While many establishments will be attempting to prevent noise, Richard Hinton of Apex Acoustics indicated that all establishments are different and will therefore require different solutions. He gave an example of sports stadiums which look to create stimulating atmospheres, rather than the near-silent environments that we would expect from our schools. With this in mind, it’s suitable to ensure that architects design the appropriate acoustics for the appropriate venues.

Frequently, the focus of a building relies heavily on aesthetics, leaving acoustic considerations to take a back seat. More needs to be done to heighten the awareness around the importance of balancing both acoustics and aesthetics within today’s buildings.

So what is being done to ensure acoustics don’t get overlooked within today’s buildings? As Nick rightly explained: “It’s all about understanding the user and who will be using the building, as well as the activities that will be taking place within a space. This comes from having a good dialogue between us, as the architect, the client, the acoustician, and, of course, the manufacturer – as we did with Rockfon throughout the duration of The Word’s design and build process. If an architect, or anyone else in the decision-making process, is concerned acoustically about a particular space within a building, this should be discussed early on with an acoustician.”

Furthermore, there are commercial gains to be recovered from good acoustics, particularly within public areas where noise is an unwanted sound – such as restaurants, workplaces and schools. Restaurants were a good example brought up at the roundtable; with many stating that they find it “disappointing to visit a restaurant that’s uncomfortably noisy” and, with platforms such as TripAdvisor, acoustics may quite possibly have a monetary impact on a business. It was highlighted by Tim Spencer of Rockfon that acoustic issues are relatively easy to resolve.

Peter Rogers stated that “many won’t notice a mediocre acoustic setting, however, many will notice an insufficient one”. So getting acoustics right from the outset, inevitably, will save architects both time and money. For example, by modelling early on, FaulknerBrowns was able to interpret the reverberation and sound transmission internally and return back to its client advising on which rooms could be utilised for specific activities.

By recognising the client’s aspiration for space, architects can be more sympathetic to acoustics and deliver a piece of architecture that’s fit for purpose. It’s time for the industry to take a holistic approach towards acoustics within our buildings and work together to ensure our buildings are acoustically-sound, whether it be a school, restaurant or a library.