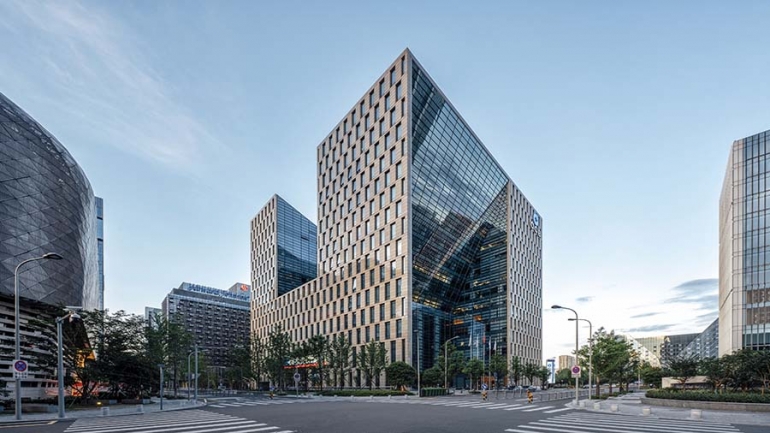 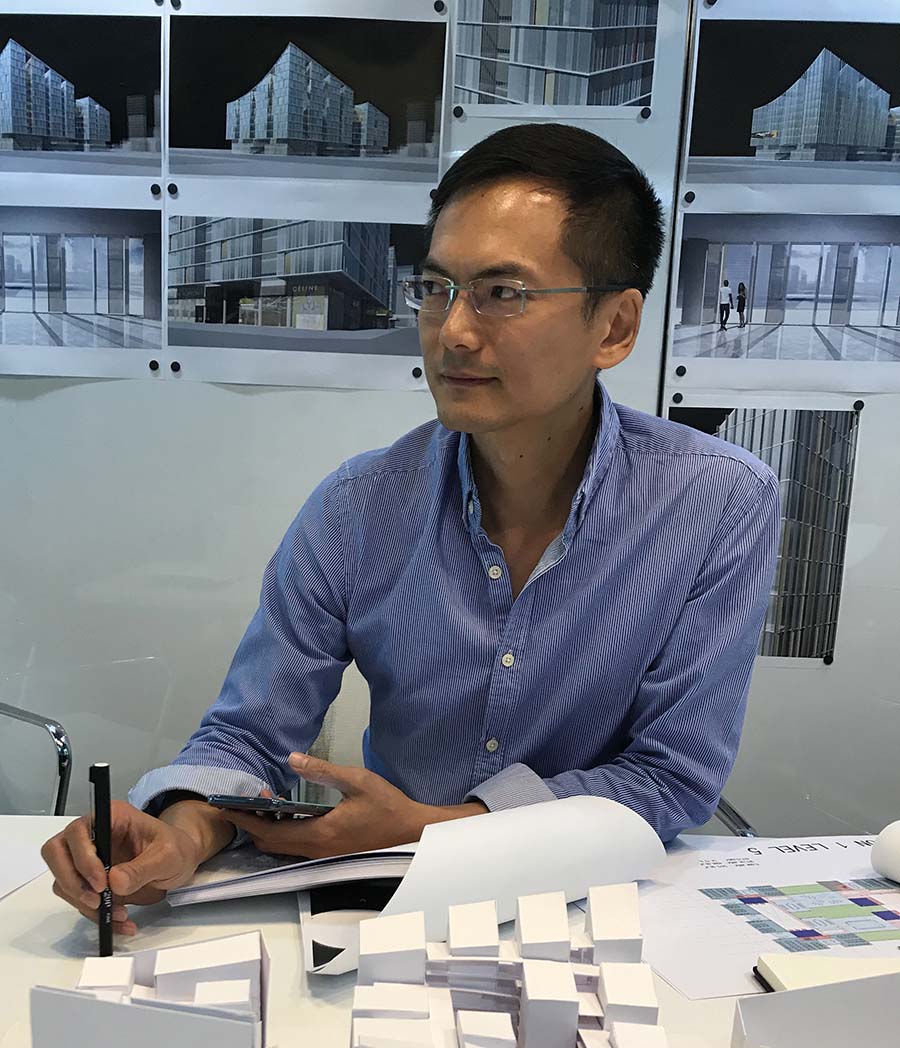 Please tell us a bit about your career background.

I trained in Australia and worked there for six years on residential, hospitality and commercial projects throughout Australia, Singapore, Malaysia and Thailand. Shortly after becoming a registered Architect, I moved to Shanghai with Australian firm Hassell. Significantly, we won the competition for Alibaba’s headquarters in Hangzhou. I then moved to Hong Kong and joined RMJM and have been here for the last 13 years. We have been running the RMJM Red Studio for almost seven years now with a focus on mixed-use projects in mainland China.

I hadn’t made up my mind about architecture as a career path until I had to make the formal decision. I was interested in a wide range of fields including graphic design, psychology, cartography, science and engineering. Sitting somewhat on the fence between the arts and science, architecture was a compelling direction.

In my second year at university, I remember being bemused by the structural engineer professor’s opinion of architects. He said that an architect was a “jack of all trades and master of none”. What he deemed to be a weakness of the discipline was for me its greatest draw.

Who has been your greatest influence and source of inspiration?

Looking back, my father’s broad interests that ranged from the natural world to the arts and sciences shaped my holistic outlook on life and influenced my choice of career and how I live and work. For a conservative personality, he has a strong liberal mindset. Against the trend of the time and setting, he let me choose my career path independently.

I’ve certainly been influenced by the well-known architectural firms and their work but what is most inspiring is seeing great work produced by lesser-known studios; there are too many to mention. They have such strength of faith to put everything on the line to push forward for what they believe in.

What has been your most notable project to date?

It’s hard to pinpoint a single project, so I’ll grant myself three projects and justify each of them. The China Construction Bank headquarters in Ningbo was a bold proposal as a Brutalist piece of sculpture in a financial district filled with glass towers; it went against the grain. The Shenzhen Bay Twin Towers project was the first major win for the RMJM Red Studio and is about to complete construction. Having the towers inadvertently catch my eye kilometres away as I crossed the border from Hong Kong to Shenzhen was a surreal moment. The Alibaba headquarters in Hangzhou was my first project of such scale and significance, and it opened my eyes to the disruptive potential that architects have not only to the built environment but to the individual, to a corporate entity and everything around it.

All three of these projects are now built and as with all projects they are the result of concerted team effort. The fact that some projects become realised whilst others don’t is testament to the vision and endurance of each individual involved in these projects.

How do you approach your projects?

We approach all projects from a blank page with as little preconception as possible. We spend a lot of time getting to know the site, the client and the brief. Then we engage in discussion within the team and with stakeholders and start to imagine an appropriate response. The process may sound ordered and linear, but we’ve found that the strongest outcomes come from a more meandering path and so we let things happen more freely at the early stage. We will have dozens of schemes on the wall to ruminate over. These get refined, culled and short-listed until we have a single scheme that makes the most compelling argument. We enjoy the challenge of the competition process, but we prefer the dialogue of formulating a scheme in collaboration with the client.

When a scheme is determined, we work hard to navigate the myriad of factors and hurdles that come up during the process and focus on staying on target. We want to preserve the potency of the initial scheme and simply improve upon it, making it more polished.

What do you think is the greatest challenge for designing in sustainability?

It’s always a challenge to convince a developer that the effort and capital investment put towards sustainability is worthwhile. Whilst most would agree with the long-term benefits of such initiatives; there are many other more immediate priorities that sideline sustainability. The greatest motivator in the decision-making is market opinion and what is deemed required and accepted in the market. Factors of speed and cost-effectiveness are still the most dominant drivers – hence the adoption of sustainable initiatives has not been strong.

China’s Green Building Standard, introduced in 2006, is a good system; however, it is voluntary, and there is little incentive to aim for the top three-star rating. I believe that making it mandatory for all residential and public projects over a certain size is possible, and by making it mandatory, we can bypass the slow uptake of green initiatives by the market.

What is your favourite building and why?

I’ll avoid choosing an RMJM project to remove any bias. The Federation Square by Lab Architecture Studio in Melbourne is a truly civic project. I feel that it really represents the city’s textural and cultural richness. It’s a complex and ambitious project and is impactful to the way people interact with one another and the built environment. I could say the same of the DDP in Seoul by Zaha Hadid Architects. A completely different aesthetic but an equally impactful project.

What do you think is the greatest challenge for architects today?

Time has always been a scarce resource for architects intent on crafting the best possible designs. Technology has paradoxically made those pressures even greater with the expectation that things can now be done faster.

For any practice, the challenge of overcoming financial and time pressures to deliver quality design is constant. “Good things take time”, but unfortunately, “time is money”. No doubt there have always been such constraints, but increased competitiveness in what is now a truly global marketplace has made the pressure seem more acute.

What do you think is the greatest challenge for architecture students at the moment?

It’s an issue that affects not just architecture students but practitioners as well. Instant access to vast amounts of design online can become an all too convenient ‘spice rack’ to find a style to mimic. It’s a double-edged sword that has allowed us to explore so much without leaving our chairs, but the understanding of the projects tends to be superficial, even graphical. I’ve seen what I believe to be the symptom of this practice in many new buildings. They’re photogenic, but when you’re there, moving through them and taking a closer look, it’s often disappointing.

It may be hard to conjure originality in this day and age, but there should be sincerity in the process in order to create something that is authentic and relevant.

What advice would you give to newly qualified architects?

My suggestion to them would be to spend the initial years being as much of a generalist as possible. They should try to work on as many types of projects as possible, large/small, complex/simple, public/private. They could work on commercial, transport, residential, sports, hospitality, civic and educational projects. They should position themselves to be involved across all stages of the project, from project inception to concept design through to site supervision. There is a lot to learn, so I would suggest doing this for at least 10 years.

During this time, they should be figuring out what is of particular interest and to then start consciously specialising and becoming an expert in it. It could be theatre design, aged care facilities, facade design, high-rise towers or hotel resorts. The key is to be deliberate, always to be mindful of where you are in your career at any moment in time and where you want to be.

What can we expect to see from RMJM over the next year?

RMJM’s strength is in its team’s diversity and open-minded approach to design. Each year, the projects delivered are of a wide variety and don’t conform to a particular style. So it’s always interesting to see what all the different studios have been working on.

RMJM Red Studio’s Shenzhen Bay Twin Towers will be completed in 2020, so it will be exciting to see it put into use. We have also been working on some unique mixed-use projects; from conceptual design to detailed design – several of which are under construction and will soon start to take shape. We have also been active on smaller-scale projects which have been a good counterbalance to our larger projects, each informing and enhancing the other.