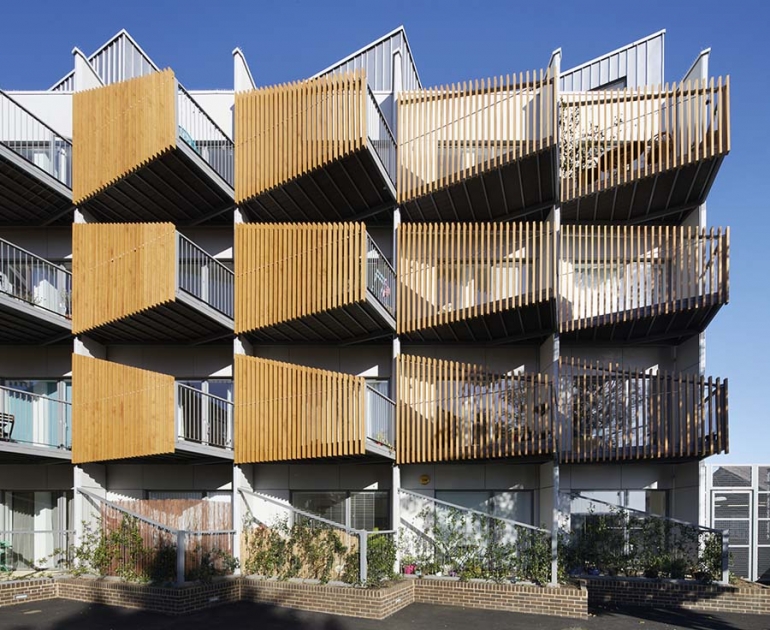 Shining the Light on Paxton House

Spacious and airy, relishing in light from both north and south aspects, and with private timber-clad balconies, Paxton House is a far cry from the usual commercial-to-residential conversion in London.

This sensitive renovation could have been a different story had the architect not exercised their creative license and if the developer had chosen to take the easy route.

However, after reviewing the proposals, alma-nac suggested taking a more innovative approach. This meant not only renovating the existing building but also adding some new-build elements to enhance the design.

Letting the light in

With its north/south aspect, a typical office-to-residential conversion would have been designed around a central corridor leading to apartments on either side, half of which would have been north-facing and dark.

Instead, alma-nac cleverly created 43 dual-aspect apartments within the building. With access to the apartments running along the north elevation, the one- and two-bedroom homes are arranged in couplets with each one enjoying an angled south-facing balcony with a north-facing window on the other side.

In addition, the building has a shared entrance hall, office space and rooftop garden. Together, with the couplet design of the apartments, these shared amenities deliver not only a sense of community for the residents, but also provide an enhanced sense of space.

Paxton House embraces wellbeing principles through its enhancement of light and providing each home with outdoor space on their private balconies.

Working in a new dimension

The apartments at Paxton House are narrow, but due to clever design, appear both light and airy. alma-nac had considerable experience of working with very narrow spaces and had designed the well-known Slim House in 2012. The idea for Paxton House stemmed in part from that project, which had made such good use of a confined site.

To assist in the design process, alma-nac chose to work in three dimensions. From the initial stages of the project, the client could fully appreciate the sense of light, air and space within the apartments straight away. For this, they chose architectural software Archicad from Graphisoft. Paxton House set a precedent for how Archicad is used within alma-nac, as Director Caspar Rodgers explains: “This was the first large-scale project that we designed using Archicad, and we learnt a lot about the software and how we use it today. We worked very hard to set up a new workflow in the early days, and now that we have an established process in place, the time savings are tremendous.”

alma-nac modelled the existing building in Archicad and then used the inbuilt renovation filters to model the alterations and the new-build elements.

“Our client was very heavily involved throughout the design process, and by using the renovation filters, they could easily visualise the design and see exactly which parts of the building were going, which would be retained and which were new,” says Caspar.

“The power of Archicad’s renovation filters is endless. The advantage is that everything is saved in one file, and all elements are fully coordinated, so there are no nasty clashes,” continues Adam Shapland, an Associate at alma-nac.

Paxton House had limited space for running heating, electrical and plumbing services to the apartments, so alma-nac engaged very early with the M&E engineers to devise a workable solution. The space-saving result was that the apartment access along the north facade doubled as a route for the services which were fitted into the gantries.

“The angled balconies are self-supporting and were pre-fabricated off site. Specialist steelwork was also required. With the help of Archicad, we could export the data directly and talk through the model with the structural engineer and steelwork manufacturer in a clear fashion.

“The structural engineers used Revit, and it was the first time we had exported information from an Archicad model into IFC. Graphisoft’s helpdesk team in Nottingham was great – and helped us to set up the import and export of IFC files,” says Caspar.

Freeing up more time for design

Whilst working on the design for Paxton House, alma-nac simultaneously set up new templates for the practice, so it took more effort at the start. However, the benefits came later in the project with improvements in efficiency and consistency.

“When you start to use new software, processes initially take longer. We developed our template from this project which is now very robust – and we use the same principles on all our projects. We now find it much quicker to work in 3D – especially when we’re renovating an existing building and modelling directly from a survey,” says Adam.

The ability for the whole team to work on the same file, using a set template and project standards has been very beneficial to the practice. When designing Paxton House, alma-nac had multiple architects working on the project, designing the different apartments which were all coordinated into the single model.