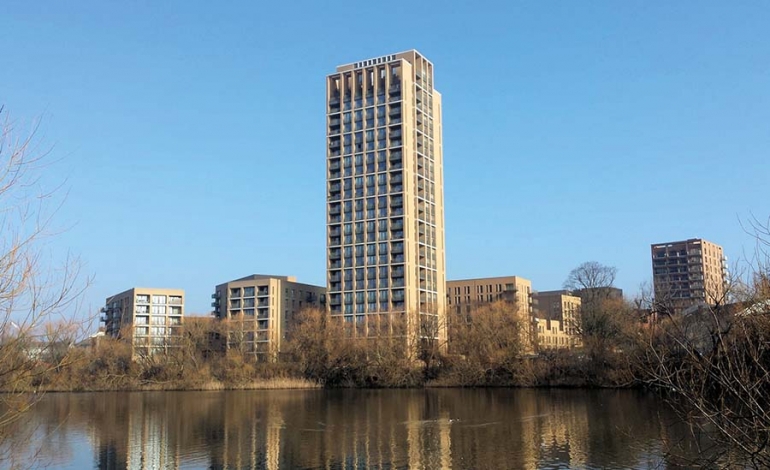 Minimising energy use in buildings by improving the thermal performance of the building envelope has become increasingly important in the drive for sustainability and energy efficiency. And the prevention of thermal bridging is critical with structural attachments, such as balconies. This was a particularly important consideration at the extensive new Hendon Waterside project.

In recent times, we have seen the adoption of more stringent envelope thermal performance requirements in the relevant Building Regulations, also voluntary certification schemes such as BREEAM and Passivhaus. These include requirements to reduce heat flow through the walls, roofs and floors. Adding insulation to the building is one obvious way to do this, but insulation is not effective if there are easy heat flow paths around it. As a result, codes and standards are progressively moving to requirements based on effective thermal resistance, which requires identifying and minimising thermal bridges in the building envelope.

Thermal bridges can be defined as being localised areas where there is a higher thermal conductivity than the adjacent areas. A typical example of a thermal bridge in the building envelope would be where materials with high conductivity penetrate the insulation layer – balcony connections being a particularly good example. Its presence in a building assembly will result in higher heat transfer through the assembly and colder surface temperatures on the warm side. This is likely to cause condensation on cold surfaces, leading to issues such as much higher energy use for heating and cooling; non-compliance with Building Regulations; corrosion of metal elements and structure; decay of wood-based materials; degradation of insulation performance – and mould growth with its associated health concerns.

Prevention of thermal bridging is critical

For any large-scale project involving a variety of balcony types, it is critical that the prevention of thermal bridging is addressed early in the design process.

One current project with a challenging variety of balcony connection requirements is Hendon Waterside, North West London – situated alongside the Brent Reservoir. The reservoir straddles a large area on the boundaries of Barnet and Brent at West Hendon, and the 170-acre mixed-tenure housing development being built alongside it will see the regeneration of a 1960s housing estate. Construction at West Hendon is in six phases and completion is scheduled for 2027. The redevelopment of the West Hendon Estate offers the opportunity to establish a clear visual connection between the site and the Welsh Harp, whilst respecting its important ecology. The masterplan has been developed in partnership with the London Borough of Barnet, Barratt London and Metropolitan Housing Trust; and incorporates social, affordable and private housing, new public parks, a primary school, community centre and commercial space for small cafes or shops.

In addition, the masterplan proposals seek to reconnect what has become an isolated site to the surrounding streets and open spaces by developing a new park on the route to Hendon rail station. The scheme will deliver around 2100 new homes, being constructed in 23 blocks, varying in height from three to 23 storeys – along with an imposing tower building of 28 storeys – all of which offer attractive waterside views.

A demanding number of balcony varieties

As the leading international supplier of structural thermal breaks, Schöck can provide a solution to practically every connectivity detail with the hundreds of variants available in its main Isokorb range – offering planners enormous freedom of design. The Isokorb products used at Hendon Waterside are for concrete-to-concrete detailing, and to minimise any risk of thermal bridging; 13 variants of the concrete-to-concrete connectivity Isokorb were widely incorporated. It features a compression module HTE-Compact, has an insulation thickness of 80mm and is a load-bearing thermal break element for free cantilevered balcony construction.

The products are for concrete-to-concrete connectivity at Hendon, but the comprehensive Isokorb range also offers solutions for concrete-to-steel and steel-to-steel – and even a maintenance-free alternative to wrapped parapets. A requirement is that the temperature factor used to indicate condensation risk (fRSI) must be greater than, or equal to, 0.75 for residential buildings. This is easily met by incorporating the Isokorb. The range also complies with the Government Standard Assessment Procedure, SAP 2012, concerning CO2 emissions from buildings and respectively heat losses through non-repeating thermal bridges.