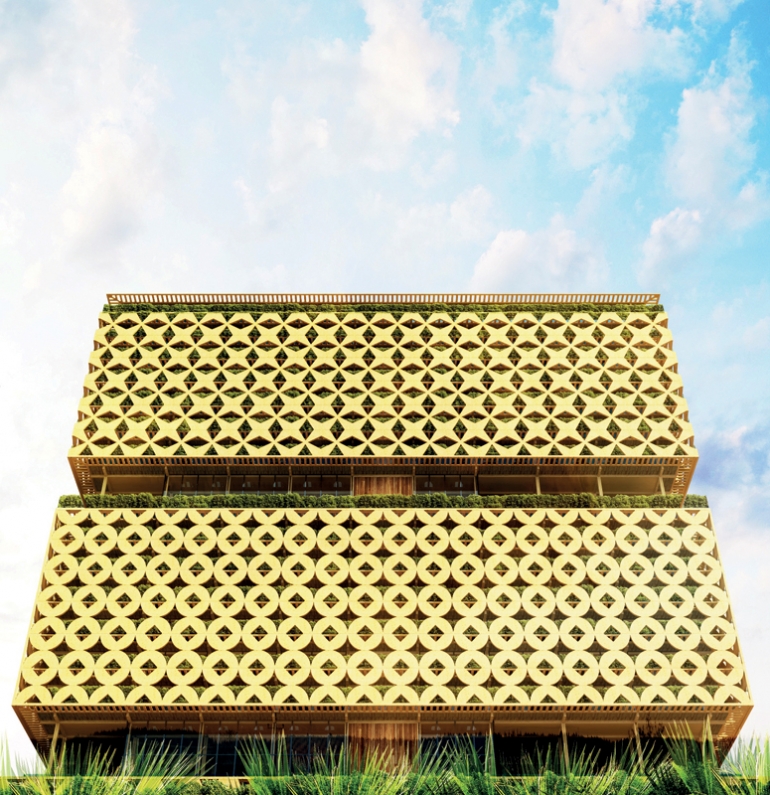 With population growth on the rise across the globe and gross floor area (GFA) in decline, architects have been looking to the sky in search of alternatives to meet the world’s housing demand for many years. However, with the development of high-rise alternatives for residential applications, many towns and cities have become densely urbanised and often neglect biodiversity, connecting us back to our natural habitats. One architect practice, however, is changing the face of high-rise structures in the populous city of Lagos.

KA | Hermann Kamte & Associates has revealed the first wooden skyscraper proposed in Africa. Lagos’s Wooden Tower is among the winners of the inaugural WAFX Prize. It is announced as one of the world’s most “forward-looking architectural concepts” and the ‘Best Cultural Identity Project of the Year’.

HKA | Hermann Kamte & Associates has unveiled its proposal for a wooden residential tower in downtown Lagos; the most populated city in Africa with more than 16 million inhabitants. The design of the skyscraper of more than 40,000m² was directed by Architect Hermann Kamte, CEO and Founder of HKA | Hermann Kamte & Associates. The architect expresses that this architectural concept of a wooden tower aims to improve the living conditions of the inhabitants of the city of Lagos.

The tower is a residential unit that develops around cultural and urban themes. The project located in Ikoyi, a luxury residential area, is built on top of an existing structure. The challenge was ‘how the roof of today can be the plot of tomorrow? How to build a new city above the existing one. What is plan B for the future?’. The project focused on the reinvention of a new urban fabric with the hypothesis of a solution and sustainable construction with wood. In addition, the city of Lagos has forest resources that can produce timber.

The existing Abebe Court is a complex of four structures. It consists of four bedrooms and three apartments spread over four floors. There are amenities: swimming pools, a gym, tennis courts, a children’s playground, parking lots, water treatment and sewage treatment and electricity generators.

The tower is organised in three blocks above an existing structure. Each block consists of six current floors. The envelope of each block corresponds to a particular Yoruba tribal symbol. The blocks are connected to each other by gathering space and sports or recreational activities for residents. From the bottom to the top, there are housing units with one, two, three and four bedrooms.

The height of the tower allows it to benefit from natural elements such as ventilation and lighting. The floors are surrounded by greenery and terraces. The building envelope is a sunscreen, beyond its cultural significance.

The greenery in the space creates beauty, sensitivity, naturalness, aesthetics and comfort for the residents. With its microclimate effect, it is a giant lung in an urban space which helps to reduce the surrounding pollution. The terraces allow you to enjoy the sky and the city as well as the beautiful landscape. The roof is a landscaped and living space; it has a restaurant and a garden.

In this project, the approach of the architect team was made in the consideration of; cultural parameters, the predominant and historic human group of the city of Lagos: architecture and Yoruba culture and traditional Yoruba culture.