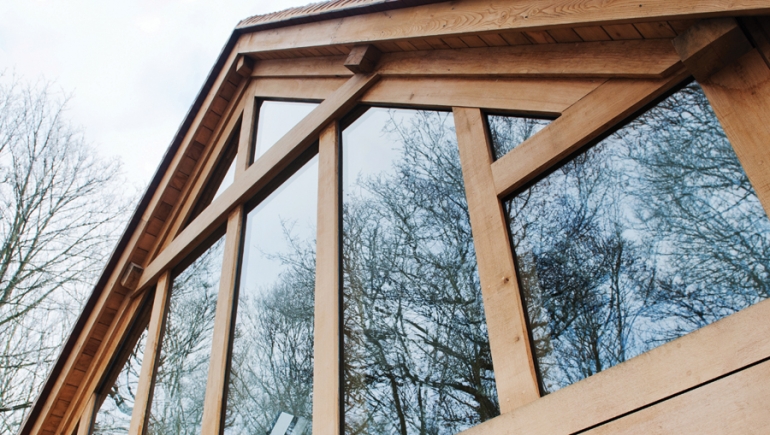 Oak is the most iconic of British hardwoods for structural use, but do you really understand it and the available options, and crucially its benefits over imported oak? Tom Barnes of Vastern Timber explains.

ak from English woods and forests has been used for centuries in building construction and original oak beams continue to support structures more than 500 years old. The traditional popularity of English oak can be explained by the availability of the trees and the widely appreciated durability of the wood. Oak is very hard to destroy; large sections will resist fires intense enough to melt metal and will flex to accommodate the natural movements of a building.

Although English oak stocks have depleted over the centuries, there continues to be a healthy supply of logs from private estates and, to a lesser extent, the Forestry Commission. With an increasing emphasis on sustainable forestry and general good practice among forest owners, oak forests will continue to be a productive part of the landscape in this country.

The choice of whether to use English or European oak can be influenced by both aesthetic and technical differences in the wood. There will also be choices to be made regarding grading, cuts and even from which part of the tree the timber comes, so getting the balance right will rely on a complete understanding of the various options and influencing factors.

The overarching choice facing specifiers is whether to choose dry oak or fresh sawn wet oak, commonly known as ‘green’ oak. Oak beams are usually cut from trees between 90 and 120 years old, ideally felled during the winter when the sap is down. Because of the fact that it is much easier to work with, green oak is the ideal way to use the timber. The alternative, dry oak, is very hard and therefore much more difficult to work, and will be between two and four times as expensive.

Many people regard English oak to be the stronger choice because the wood is coarser and features a more interlocking grain. This comes as a result of small knots and clusters of knots within British trees that are not grown as straight or as cleanly as French or German trees. The closeness of the grain around these knots gives the timber more strength as well as a more interesting aesthetic. By comparison, with French and German oak the grain typically runs in a very straight line, which is excellent for joinery, but the wood is ‘mellow’ and without the interlocking grain.

The direction of the grain is also a consideration, if a tree is nice and straight, so the grain is likely to be as well. If the tree is bent or twisted, the grain can present a structural problem when cutting a straight beam. However, this also presents another benefit of English oak, which due to the fragmented and open woodland it often grows in, can often be misshapen.

When manufacturing curved oak beams it is necessary to use a curved log. When cutting curves from a straight log the grain will inevitably run off the arc of the final cut. Drying cracks will run along the grain and therefore across the face of the curve, with the likelihood of the curve snapping. With English oak it is common practice to store curved logs for just this purpose upon which a curve template can be laid for cutting. The grain of the wood will follow the curve of the template and the produced piece will have much greater inherent strength.

This leads on to the issue of where exactly the timber is cut from the tree. Beams cut from the core (heart) of the tree will be stronger as the grain is more compact. When a sawmill addresses a newly-felled tree, full-length logs are cut from a butt end at the bottom of the trunk, typically 2.5 to 4.0m, depending on where the first bough usually appears. This butt end is generally clean and free of knots and will be planked and dried to produce joinery quality wood. As knots start to appear, the sawmill will take out the middle of the tree up until the point where knots become problematic, and that is generally where beam quality wood is cut from. The very top of the tree, with lots of knots, becomes the lower quality wood, often cut for products such as landscaping sleepers.

It is the issue of sustainability which ultimately dictates that English oak is the better and more responsible choice. The British timber market has for a long time suffered against foreign imports. 94% of all hardwoods used in the UK are now imported. This has resulted in an industry being hard hit and communities also being impacted as a result. This in turn has had a negative effect on the management of our own native forests and woodlands which, without a strong domestic timber industry in support, has consequently suffered from lack of adequate management. The reality for architects and designers specifying structural oak is that there are more good reasons to buy British than not to.