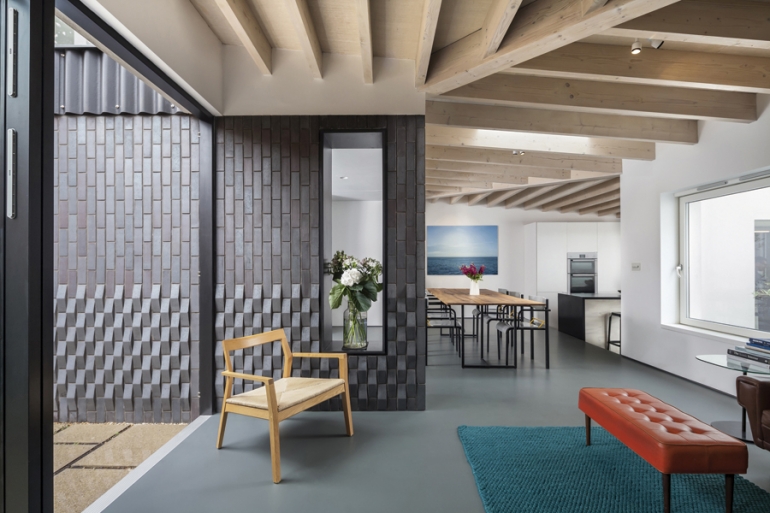 Why brick was best for the highly-acclaimed Courtyard House

Brick has become a highly sought-after building material for individual bespoke homes and housing schemes. Offering lasting value, brick does not rot, dent, or need to be painted, and it will never tear. Its modular units and variety of shapes have resulted in beautiful structures in just about every architectural style, ranging from colonial to Victorian to post-modernist.

rick is one of the few materials that can actually look better with age. It also absorbs noise, giving it an acoustic advantage over other materials – especially helpful for house-builders.

One highly-acclaimed private housing project with an exemplar use of brick is Courtyard House by Dallas Pierce Quintero Architects, which was recognised by the Brick Awards jury as the best individual housing development from a shortlist of the most exceptional architectural projects of the past year.

The building has been noted for successfully adhering to the brief of avoiding impact on the neighbouring properties, several two-storey houses and a three-storey slab block. Site plans demonstrate exactly how confined and limiting the available space was, but the designs still managed to incorporate four separate courtyards, allowing natural daylight to be prevalent in the building.

Built in an L-shaped infill space, every privacy concern has been taken into account. Whilst planning, the architects agreed a massing for the building with the neighbouring occupants, and the main entrance of the house has been lowered to allow for seclusion. Each courtyard has been allotted a different purpose, including outdoor dining and growth space for plants.

This project is also an excellent demonstration of how brick can work on a mixed-materials project. The Ibstock brick chosen is juxtaposed with sheets of black corrugated fibre-cement. The sheets are arranged vertically and lead downwards to meet the brickwork, creating a sense of separation. These materials pay homage to the remnants of the exact building materials which were found on the plot before the project commenced.

The brickwork itself is formed of Staffordshire Blue bricks, which were supplied by a Brick Development Association (BDA) member. The dark bricks create a sleek, modern feel, whilst continuing the relaxed, understated atmosphere of the building. The use of brick, both internally and externally, is one of the house’s many assets, and its juxtaposition with glass increases the daylight within the home. The sawtooth detailing which is introduced below waist height also catches the daylight to resonate through the interior of the open-plan living area.

David Pierce, Director of architect practice Dallas Pierce Quintero, comments: “The site had existing brick walls that inspired us to use brick to achieve a contemporary feel, whilst maintaining a reference to the past. We wanted a material that we could use inside and outside of the property, and in this way, the brick travels from the living room out to the patio area. Brick is an incredibly human material, whilst still being robust and regular. Its tactility helps to soften the internal space to create a truly comforting atmosphere.”

This project was presented with a Brick Award for its incredible attention to detail and creative use of brick. The judges of the category for Best Individual Housing Development commented that the property was ‘well organised, beautifully detailed and an exemplary use of brownfield land to make a new home’. The judges were impressed by the innovation on such a demanding site where the blurring distinction between the inside and outside of the property provide the owner with an extended sense of space, making the overall project a wonderful environment in which to live. The basket weave effect of the brickwork is something to behold. The blue bricks blend fantastically with the pre-existing wall on the plot. All in all it is a ‘well presented’ and ‘beautiful’ house.

Keith Aldis, Chief Executive Officer of the Brick Development Association (BDA), says: “A sound choice by the architects and planners involved in this project, as brick, on balance, lasts longer and costs less than comparable building materials. A RICS study found that brick scored highly on ‘cost in use’, as brick requires minimal maintenance, provides a high level of insulation and weathers gracefully, mellowing with age.”