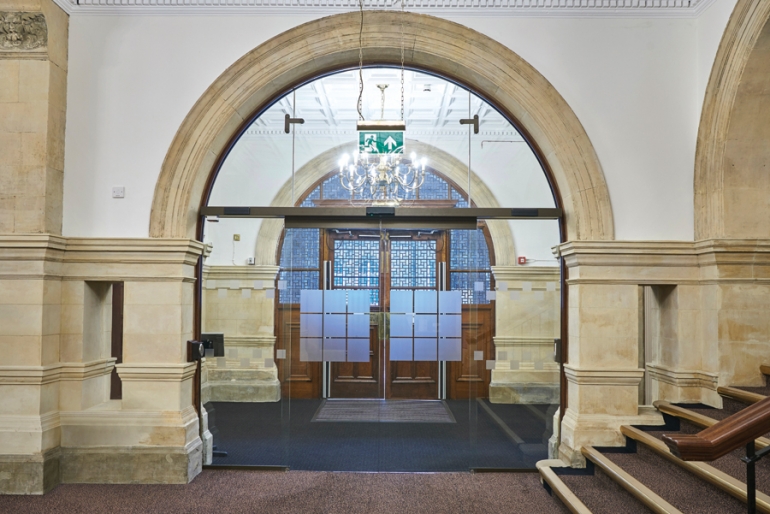 The refurbishment of an ornate Victorian town hall has breathed new life into a Grade I Listed building and allowed it to open its doors as a place of celebration as well as administration.

EZE UK has helped restore a sense of civic pride to Wakefield Town Hall which has undergone a major refurbishment and added a touch of modernity to its grand interiors.

The installation of automatic doors – powered by GEZE operators – within the redesigned interior has given the building, which originally opened in 1880, additional safety, security and convenience while maintaining the authenticity of the elaborate Victorian decor.

The old and the new are subtly blended – each contemporary element gives a nod to its surrounding heritage. The creation of a glazed inner lobby, within an original open archway which frames the town hall’s traditional heavy, wooden-leaf doors, provides access to a waiting area and beyond into offices and function rooms.

A Slimdrive SL NT operator powers these bi-parting doors which incorporate etched glass panels. These allow visitors to see the ornate detail of the building’s interior while providing a practical draught lobby. The pattern of squares on the glass mirrors the ornate plasterwork in the ceiling above. They are one of the attentions to details that blend together the old and new so seamlessly.

Another key aspect in the design has been to make the mechanisms of modern-day convenience as unobtrusive as possible. Due to their slim design and a drive unit height of just 7cm, the Slimdrive range can be discreetly installed so they are barely noticeable, and, as with all GEZE’s automatic operators, they assist with the demands of the Equality Act and are BS 8300 compliant – helping make the town hall accessible to all.

Another operator, a single Slimdrive SL NT, is fitted to a side entrance to the reception area to allow visitors to report straight to reception. This door is also glazed to match the etching on the lobby doors. The work on the automatic doors was undertaken through Laidlaw and Door System Installations which GEZE UK has worked with on many occasions.

Also fitted to the building are six pairs of Slimdrive EMD-f electromechanical swing door operators, two pairs to each floor. Like the Slimdrive SL NT, at just 7cm high, the Slimdrive EMD-f operator is extremely discreet and sits neatly on the frame. It provides assisted manual or automatic opening using the operating button with guaranteed constant opening and closing speed.

Despite their period appearance, the sets of double doors were a bespoke addition manufactured from hardwood by Longden Doors to blend with the original Victorian design aesthetic. They are fire rated and were independently tested with the ironmongery and have intumescent seals which expand in the event of a fire and seal off the gap between the door and the frame – preventing the spread of fire and smoke. This combined fire and smoke seal prevents the spread of smoke prior to the fire seal activating. The Slimdrive EMD-fs have also been fire tested and hold the Certifire Certificate of Approval CF 860 and have fire resistance of up to 120 minutes.

The ornate leaded fanlights which sit over each set of doors are also new additions and reflect the geometric patterns within the original glazing around the front doors. The operators for the swing doors were completed with brass covers to complement the finish of the original ironmongery.

Access control was fitted to each of the Slimdrive EMD-fs which incorporate rebated electrical shear locks, hidden within the frame. This was for aesthetic reasons – the architect did not want to see anything more than was absolutely necessary on the ornate doors. Proximity readers allow staff to flash a fob at a reader on the wall to open the door – providing a vital security element to safeguard the council chambers and offices.

Wakefield Town Hall underwent a two-year refurbishment, during which many of its decorative features were uncovered, such as tiled walls. External stonework was cleaned and repaired, ceilings revamped and a new heating system installed.

Its freely-interpreted north European Gothic style, including bay windows, balcony and imposing clock tower, projects its historic importance. It was designed by Architect Thomas Edward Collcutt, who also designed the Savoy and the Palace Theatre in London.

Council staff had to vacate the building while the project was ongoing but when they returned, so did the public. The register office has been relocated there and boasts two ceremony rooms which are available for celebrations and functions.

Cllr David Dagger, Wakefield Council’s Cabinet Member for Corporate Services, said: “Wakefield Town Hall is a central part of the city’s civic quarter. It is a beautiful venue and we are pleased that its modern fixtures and fittings are still in-keeping with its original historic features.”

Kaz Spiewakowski, Managing Director of GEZE UK, said: “It is always a challenge when asked to provide a modern solution for a heritage building but Wakefield Town Hall is the ideal example of where the new can complement the old. The installation of a lobby has provided a contemporary and aesthetically-pleasing addition which enhances how the ground floor can be used, while there’s a nod to the past in the finishing of the operators which now power the ornate swing doors.”