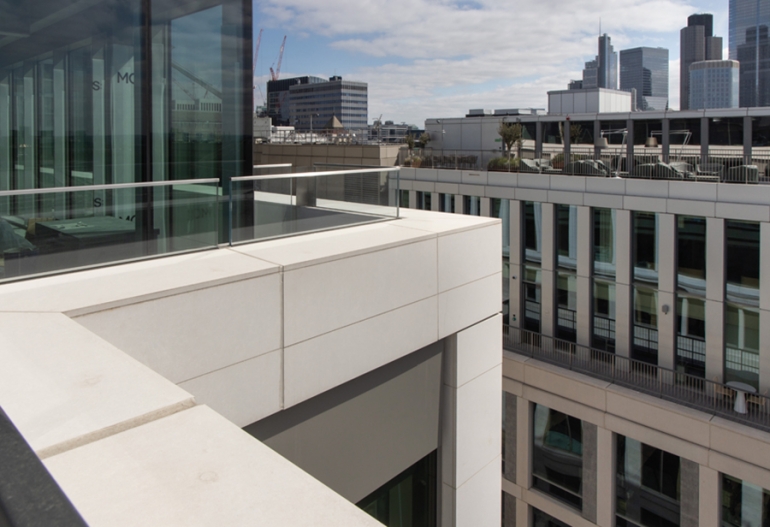 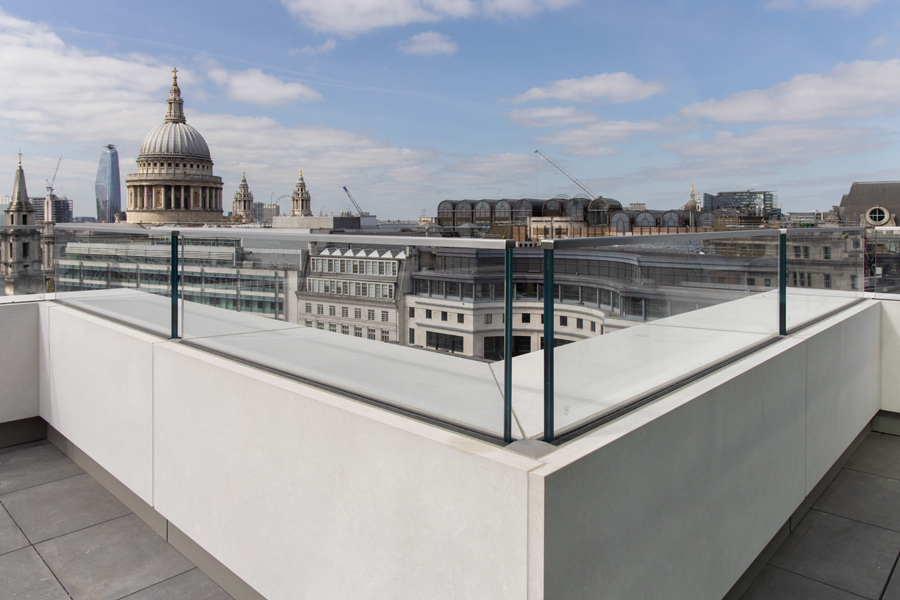 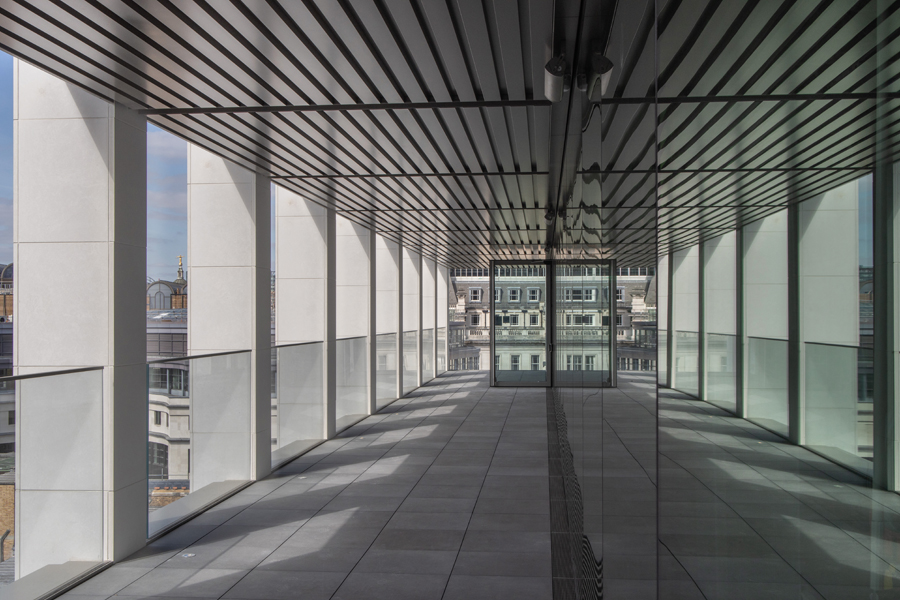 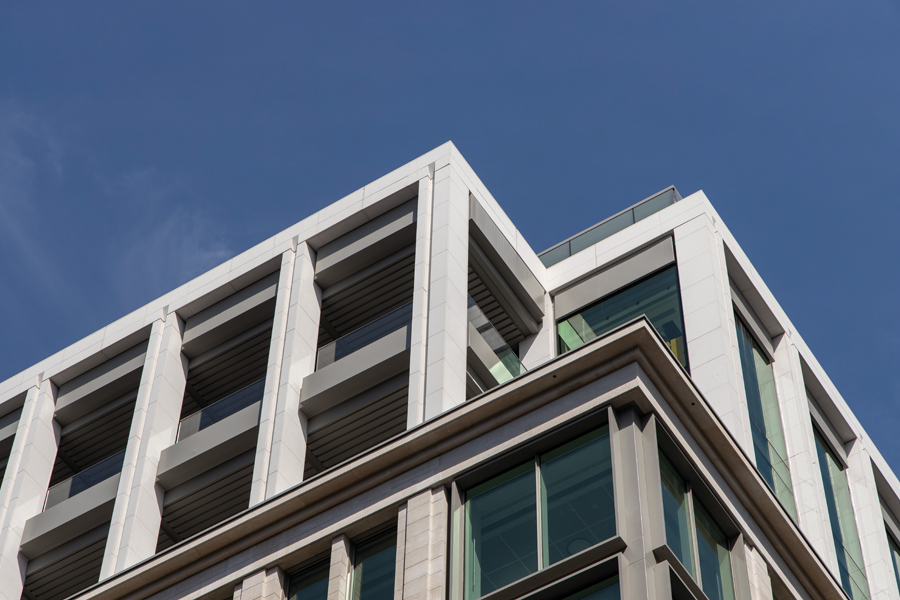 The existing Portland Stone facade has been retained and simplified with aluminium infill panels. The architect needed to find a cladding material for the additional storeys that would reference the materiality of the existing building and answer planning requirements. The cladding system for the new storeys also had to work within the loading parameters of the original structure and offer a viable solution for the buildability challenges of working at height on the confined site. Shackerley’s SureClad Engineered Stone cladding system answered all of these requirements and was installed as pre-fabricated modules, following close collaboration between Shackerley, and Austrian facade specialist, GIG Fassaden.

Although originally constructed just 22 years ago, Gresham St Paul’s has undergone a radical transformation. The project has created an entirely new building within the existing shell in a BREEAM ‘Excellent’-rated development.

The design intent for the facade was to carry through the materiality of the existing Portland Stone to the three-storey extension, but the possibility of using Portland Stone was discounted early in the specification process.

Tzi Leung from Wilkinson Eyre explains: “The use of Portland Stone was problematic in terms of structural loading and buildability. The additional storeys were constructed using the building’s original foundations, so we needed a lightweight structure and a facade system for the extension, compatible with a lighter frame. From a safety and buildability point of view, delivering and installing heavy stone at height also meant that an alternative lighter material was preferable.”

The Wilkinson Eyre team considered several alternative cladding systems. Each potential solution was assessed against a series of criteria; look and feel, cost, fire safety, weathering, green credentials and mechanical suitability. The design team also considered a number of reference projects, including Axtell House, an office building in Soho where Shackerley’s SureClad Engineered Stone system was used for the facades of additional storeys to coordinate with the Portland Stone of the original building.

Tzi Leung continues: “Shackerley’s SureClad Engineered Stone system scored well against all our assessment criteria. Robust and lightweight, it is fire tested and certified as A2/S1-D0 in line with BS EN 13501-1. The creamy beige Valpolicella engineered stone material with white variegation we selected from Shackerley’s extensive range provided an ideal match for the existing Portland Stone facade, and the sandblasted finish created the right aesthetic for the project.”

The lightweight engineered stone material specified for the additional storeys overcame the issue of structural loading for the facade of the extension. Still, the main contractor, Mace, also wanted to ensure that the system could be installed safely and contribute to an efficient programme. Mace’s strategy was to install the facade as a modular system. Each pre-fabricated facade section was delivered to the site as an installation-ready module that could be craned into position and secured in place. Facade specialist, GIG Fassaden, was tasked with designing the cladding modules.

Thomas Thaller from GIG Fassaden explains: “The initial plan was for the SureClad Engineered Stone panels to be shipped across to us in Austria and then delivered back to site in London. However, it soon became clear from working with Shackerley that the company had the technical expertise and manufacturing capabilities to fabricate the modular units to our design at one of Shackerley’s ISO 9001-accredited factories in the UK. This provided an ideal solution that fits with the sustainability goals of the project by reducing embedded carbon while allowing close coordination of each aspect of the fabrication in a single, quality-assured factory.”

Thomas Thaller continues: “It was a technically-complex requirement, but the Shackerley team worked with us on the design and produced a sample to enable us to trial the solution and provide an accurate costing for both materials and fabrication.”

The bracketry for the facade system was also designed and manufactured by GIG Fassaden and fixed to the building. When each SureClad Engineered Stone module arrived on site, it was craned into position and bolted to the substructure.

Thomas Thaller adds: “Carrying out the installation in this way meant that all the complexities of the detailing were pre-installed by Shackerley’s experienced team in their factory, avoiding unnecessary work at height on site and saving time on the programme. Carrying out the installation in this way also avoided the need for a scaffold, which added to the time and cost savings of the modular approach.

“It was a strategy that relied on close cooperation between delivery partners and the technical expertise within Shackerley, who were proactive in collaborating with us.”

Gresham St Paul’s is now complete, delivering a building that meets the needs of a corporate environment while considering responsibility to the natural environment. It adds to Shackerley’s portfolio of projects where the SureClad system has provided a lightweight and robust solution for the facades of additional storeys, and highlights the company’s ability to enable a modular construction strategy.