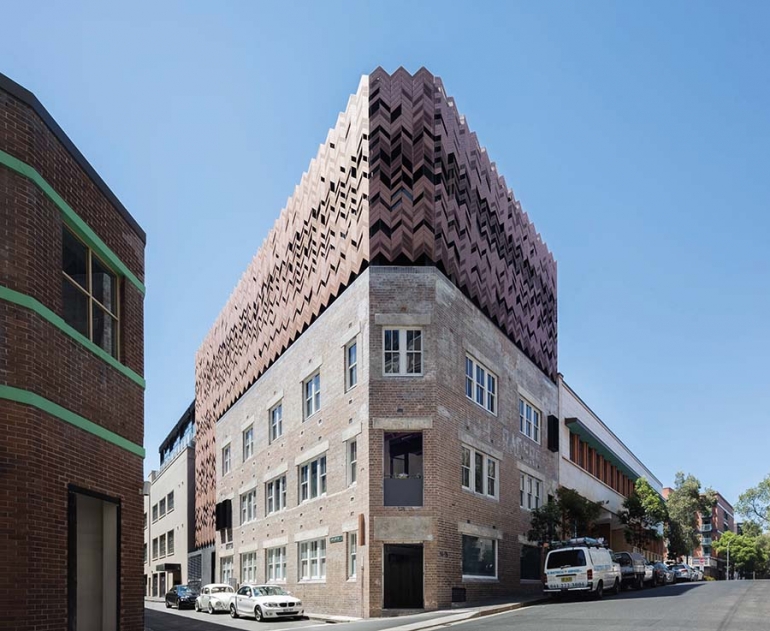 Although copper was one of the first metals used by man and one of our oldest building coverings, it has been rediscovered by architects as a thoroughly modern material.

With its timeless and naturally developing qualities and a growing palette of colours, surfaces, forms and applications, copper is particularly well-suited to enhancing the regeneration of period buildings with contemporary interventions, exemplified by a range of projects. Here, Graeme Bell, Nordic Copper Sales & Marketing Manager at Aurubis, looks at some examples.

With the 20th century and international modern movement came a fresh approach to architectural copper away from its historic role as a durable roof covering to a thoroughly contemporary material, recognising unique architectural properties and characteristics. Copper is now used as a skin for facades, roofs, interiors and architectural elements of all shapes with minimal constraints and a real sense of design freedom.

The natural development of a distinctive patina defines copper with colours changing over time, determined by and reflecting location environmental conditions. But modern factory-applied surface treatments now provide straightaway the distinctive and unique brown oxidisation and blue/green patination to selected levels. Essentially, they bring forward natural environmental changes without taking away the integrity of copper as a living material. Copper alloys, including brass and bronze, add to the extensive material palette available today.

A clear demonstration of copper’s use as a contemporary cladding material referenced by historic architectural use of the material, without simply copying the old, can be seen at the Aberdeen Art Gallery. Part of Hoskins Architects’ award-winning regeneration scheme, a striking contemporary rooftop addition is clad in copper panels, reinforcing copper’s historic presence on the city’s civic roofscape.

The extension was designed as a highly sculptural element, responding to the proportions and colours of the historic granite frontages. It is defined by vertical, scalloped panels – some perforated for transparency – of light brown pre-oxidised copper: a thoroughly contemporary design but sharing materiality with the buildings’ classical copper dome. Repairs to the dome itself were carried out using green pre-patinated copper, complementing its existing historic patination. As with the original, all the new copper will develop naturally over time, characterised by its local environment.

In Gothenburg, Sweden, original copper detailing heavily influenced major additions transforming the redundant central Post Office building – a listed national monument – into a 500-bedroom landmark hotel. Architect firm Semrén & Månsson’s deceptively simple strategy was to close up the gap in the original building’s horseshoe-shaped plan with a new twin-tower intervention. This comprises one wing clad in green pre-patinated copper, the other slate – both materials used on the old Post Office roof. Where the wings meet, they rise up together, as a pair of monolithic forms – a pair of hands in prayer, above the original roof seen from the main square.

Copper was central to the architect’s concept from the start, referencing the original: the new building was perceived as a young relative with the same DNA. Three different intensities of green pre-patinated surfaces were selected, created by varying the amount of green over a dark brown background. The combination of these elements enabled the creation of rich, animated copper surfaces for the new tower. Corners are expressed with a modern take on traditional vertical ‘quoins’, seen on the original building, expressed as thin strips, sometimes incorporating flush glazing amongst the copper.

Inspiration for copper-clad interventions to period buildings need not follow directly from historic architectural use of the material. Regeneration of the former Young’s brewery, with restoration and new build, into a mixed-use development at the heart of the London Borough of Wandsworth is an interesting example.

Here, EPR Architects were inspired by old copper brewing vessels from the site and decided to clad the upper two floors of the tallest new residential buildings in green pre-patinated copper. Adjacent to the old brewery, a playful vertical expression was added to one of the new buildings – a nod to the industrial vats that were once housed on the site – raised from the ground, with softer rounded corners and vertically-ribbed profiled pre-patinated copper cladding.

Even less literal material references – but nonetheless appropriate – are shown by additions to a 19th-century terraced house backing onto a railway embankment in Herne Hill, London. The project – designed by Michael Collins Architects LLP – involved extensive refurbishment of the original house and contemporary extensions to the rear, conceived as two cubic volumes embedded within a plinth. The language of the new extension was inspired by the honesty and simple poetry of self-built ‘add-ons’ seen along the rear of railway terraces. They give a nod to local heritage through their dark materiality, with pre-oxidised copper alongside charred timber cladding.

The choice of materials was informed by a robust environmental agenda but also inspired by the location, as Michael Collins explained: “There is a charm to the aged sootiness of the London stock brickwork facing the old railway. We wanted the cladding to relate to this historic context, and the changing finish of dark pre-oxidised copper alludes to the age of steam.”

This final project demonstrates how innovative contemporary copper cladding can transform a period building while reflecting and developing the narrative of its locality, rather than referencing historic materials themselves. Set amid a suite of heritage and inter-war buildings in Sydney’s Surry Hills, Paramount House Hotel now occupies a disused 1930s brick warehouse. Its design by Breathe Architecture reflects this historic context with chevron screens formed of copper tiles announcing the new hotel and celebrating neighbouring Art Deco buildings and its film precinct location.

The copper screens crown the building’s three-storey brick shell, enwrapping an added storey. The chevron facades, with a combination of perforated and opaque Nordic Copper tiles – plus their selective omission – curate views to the city, as well as modify daylighting and reduce glare. Breathe Architecture said: “The delicate jewel-like copper chevron crown captures the spirit and excitement of the golden era of film. The project explores the narrative between artefact and ornament, of place and of home.”