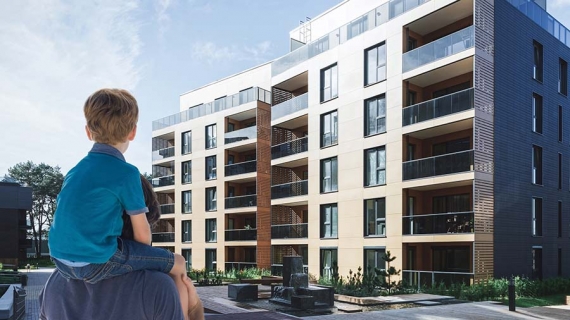 A whole host of factors need to be considered when it comes to the design, construction and ongoing maintenance of large commercial projects. With the growing pressure on developers to select products capable of maximising the performance and durability of the buildings they work on; windows have been looked to for those marginal gains. Steve Tonkiss, Commercial Manager at REHAU Windows, discusses the vital role windows play in commercial project design and the key factors that need to be considered for those tasked with selecting the best windows for their commercial build project.

No product typifies the need to balance form with function more than a building’s windows. Capable of enhancing a number of characteristics concerning building performance and appearance, architects, specifiers and developers have been urged to place more emphasis on window specification. With so many considerations to be made when it comes to selecting and installing the right window for a commercial building, it is of prime importance that those tasked with specifying windows make the most informed choice.

In order for the choice of window to be narrowed down, firstly, appropriate sound levels need to be identified. The World Health Organisation (WHO) guidelines state that community noise needs to be less than 30 dB in bedrooms during the night, and less than 35 dB in living spaces to allow for adequate living and working conditions.

It comes as no surprise that the constituent parts of a window all have a part to play in acting as an effective sound barrier. Generally, the thicker the glass, the better the level of sound attenuation. However, as a note of caution, thicker, heavier glass may not be suitable for certain types of window or installation.

The level of ventilation required within a building can also dictate a window’s sound acoustic performance. Trickle vents, for instance, will allow small amounts of ventilation through the window to avoid issues like condensation, but will also allow a certain level of noise through as well.

Modern buildings boasting a mechanical ventilation with heat recovery (MVHR) system, are more likely to have windows that don’t open; making them much more soundproof.

The window frame itself will tend to enhance the performance of the glass up to around 37 to 38 dB, and this usually comes down to the frame material. Multi-chambered uPVC frames, for example, can help reduce noise levels coming through the window. However, it is still key specifiers select solutions that have undergone stringent performance checks. This can include testing up to 47 dB using a triple glazed unit with varying thickness of glass, all contained within the window itself.

So, while every window will have its own performance characteristics, it will ultimately only perform as well as the quality of its installation. Sealing the window around its perimeter using an expanding foam tape enhances both energy and sound insulation.

With people becoming increasingly conscious about the impact their actions have on the environment, there is more pressure than ever to reduce energy consumption. For this reason, windows play a vital part in ensuring a building is suitably insulated with the added benefit of keeping heating costs down.

To measure how effective a building is at transmitting heat between the outside and the inside of a building, the U-values have been established. The lower the U-value, the slower the heat can transfer through the material in question, and; therefore, the better an insulator it is. Approved Document L of the Building Regulations state that developers should achieve a minimum U-value of 1.6 W/m2K for windows installed in a retrofit scenario, or 1.4 W/m2K in new-build dwellings. To achieve future Government targets, window and door U-values are also set to be reduced in the near future.

As with most modern building fabrics, windows have been targeted for the role they play in fire protection, and the result of that is a generation of windows capable of acting as effective fire protectors and smoke ventilators in the event of a fire. There are many product features, testing conditions and legislative requirements which come into play for specifiers of commercial windows.

One of the most appealing features of a uPVC window is that the material itself is ‘self-extinguishing’, taking the heat source away so the window will not burn or act as a fuel. As such, suppliers can provide fire-rated fixed uPVC windows that have been tested and certified with various fire-rated glass solutions from the major glass producers.

A window’s performance goes hand-in-hand with its appearance. As part of the building fabric, they need to contribute positively to the aesthetics of the building.

Architects will often be on the look-out for a window with minimal sightlines so that the break between the external building material and any expanse of glazing is reduced.

It is also important to factor colour into building design, as it can reduce the impact of sightlines. White window frames tend to contrast with the building fabric or the glass, whereas darker shades often appear far subtler, ultimately reducing the impact of the window on the building’s appearance.

Furthermore, though there is a common assumption that aluminium windows achieve significantly slimmer sightlines than uPVC, in reality, there is very little between the two. Advancing foil technology means uPVC ranges enjoy greater colour choice than ever before, and includes certain options that have been designed to simulate aluminium. Consequently, polymer-based window profiles continue to endure as an attractive option for specifiers, architects and building designers.

With environmental pressure mounting, a growing number of developers are now looking to work with manufacturers and suppliers that take a responsible approach to producing, delivering or installing the chosen products.

To dispel another myth, uPVC, or ‘plastic’ windows, can be among the most sustainable materials around. UPVC can be recycled and reintroduced into the supply chain to ensure conformance with Circular Economy (CE) requirements, making it a perfect solution for developers looking to ensure a green thread runs through their commercial building.

In response to this, key sector stakeholders have further overhauled their PVC recycling offering in order to ensure fabricators and installers have access to a responsible, yet profitable way to protect the environment. By using PVCR to recycle old uPVC windows and doors, businesses can not only manage their waste effectively, but can also minimise disposal costs and reduce their impact on landfill.

For more information, download REHAU’s guide, ‘Seize your window of opportunity: How windows can unlock the potential of your commercial building’, by visiting the below website.