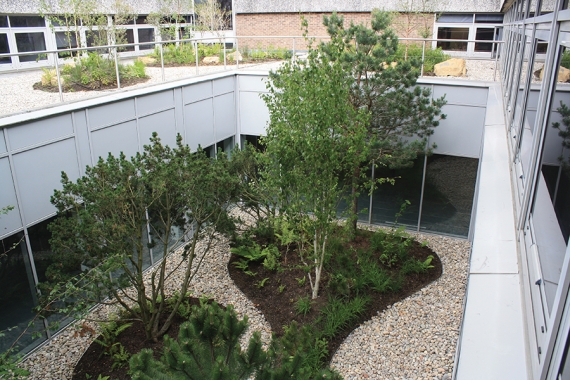 Why green and blue roofs appeal to planning

The increasing recognition of climate change among local and central governmental bodies is resulting in greater demand for green and blue roof technologies by planning authorities. Amanda de Sousa, Product Systems Manager at BMI UK & Ireland, explains what needs they meet in a drainage context.

On 1st May this year, the UK Parliament declared an Environment and Climate Emergency, the first national Government to do so. With the built environment estimated to account for around 40% of the UK’s carbon footprint, we are seeing these commitments playing out through local and national planning policies. New laws and planning guidance related to flood prevention, urban greening and energy efficiency mean that authorities are looking for developments that help them to meet their environmental aspirations.

Against this backdrop, green or blue roofs can be a useful addition to proposed developments. Some authorities are strongly recommending green roofs, others mandating them. Mentions of blue roofs – relative newcomers to the roofing scene in this country – are starting to appear in planning guidance relating to sustainable drainage systems (SuDS).

Green roofs, whether an extensive sedum-type variety or an intensive roof garden, help attenuate rainwater, increase biodiversity, reduce urban heat island effects and improve air and water quality. There are wellbeing and community value benefits too. An increasing number of architects and developers are recognising the benefits of biophilic design, where plants – or elements that mimic nature – are included inside and outside a building.

The components of an extensive green roof generally comprise the waterproofing system, a protective fleece, drainage board, filter layer, free-draining substrate for the plants and the plants themselves, often sedum. An intensive green roof would normally incorporate a trafficable drainage board with greater compressive strength and swap the free-draining substrate for a deeper layer of topsoil.

Blue roofs slow the flow of water from a roof, reducing the risk of sewers reaching capacity and flooding. Blue roofs contain rainfall within a void-containing layer with flow-restricting outlets to control the flow.

A typical build-up for an inverted blue roof would comprise a waterproofing layer, insulation, void former, filter layer and the top, permeable, layer or ballast. The permeable layer could be a green roof which would increase the system’s attenuation capacity further.

Existing national legislation and policy already encourages planners to look for sustainable building elements such as green or blue roofs in new developments. These include the Wildlife & Countryside Act, the National Planning Policy Framework; Securing the Future, the UK’s sustainable development strategy and Approved Document L, Conservation of Fuel and Power.

Some authorities, such as Sheffield, Manchester, London and Edinburgh, have incorporated these policies into green city strategies which feed through into their local plans. Such strategies encompass the need to make cities or regions climate-resilient, how to ensure that developments are sustainable, ways to reduce air pollution and, of course, the overriding need to cut carbon emissions.

Some councils are actively calling for green roofs. Sheffield City Council, for instance, which boasts the largest proportion of green roofs after London, says in its Guideline CC1 that all large developments should have green roofs covering at least 80% of the total roof area. Large developments are classed as those with 10 dwellings or more or over 1000m2 gross internal floor space.

Urban greening – which involves covering walls and small pieces of land, as well as roofs, in plants – is moving up the agenda in many UK cities. London has just introduced the Urban Greening Factor (UGF) in its draft New London Plan, a move which is likely to be copied by others. The UGF is a tool to quantify the amount and quality of urban greening that a new scheme provides and will be used to inform planning decisions.

Like Sheffield, London has been actively encouraging green roofs for over a decade, publishing a guide to green roofs to complement its 2008 London Plan. The draft New London Plan encourages the use of blue roofs for the first time, stating that rainwater harvesting – including green and blue roofs – should be the first option for a sustainable drainage strategy in its Policy SI13 Sustainable Drainage.

In built-up areas, other forms of water attenuation such as ponds or below-ground water storage tanks are simply not possible. And even where tanks may be possible, they are likely to be far more costly and more complicated to access and maintain than a blue roof.

At national level, the Environment Agency launched a draft of its latest National Flood and Coastal Erosion Risk Management Strategy, a document that is now being revised following consultation. Planning is likely to be centre stage in the strategy, with authorities urged to take a more holistic view which includes the use of SuDS.

The principal behind SuDs is that new developments should produce the same run-off rates as a greenfield site, with surface water managed as close as possible to its source. Hence the attraction of blue roofs. In Wales, the inclusion of SuDS became mandatory from 7th January 2019 for all new developments over 100m2.

In England, national planning policy advises that major new developments should incorporate SuDS, yet there are no signs that it will become mandatory.

Atypically for a green or blue roof provider, BMI UK & Ireland offers a comprehensive range of designs, allowing for bespoke solutions – whether in waterproofing systems or planting – that can meet all needs, not to mention the challenges of planning requirements. Specifiers must recognise that such roofs are a specialist element, requiring a precise specification, detailing, installation and inspection regime. BMI can provide technical and quality assurance support in this regard; and its six-step specification service ranges from consultation site surveys, and specification; leading to installation support and site inspections which ultimately conclude with industry-leading roof systems guarantees.

Looking beyond capital outlay, green and blue roofs add value to the environment and communities. They can reduce lifetime carbon footprints and remove or lower costs caused by flooding. For authorities looking to reduce their carbon footprints and meet climate change commitments, they can be an attractive proposition for would-be developments.