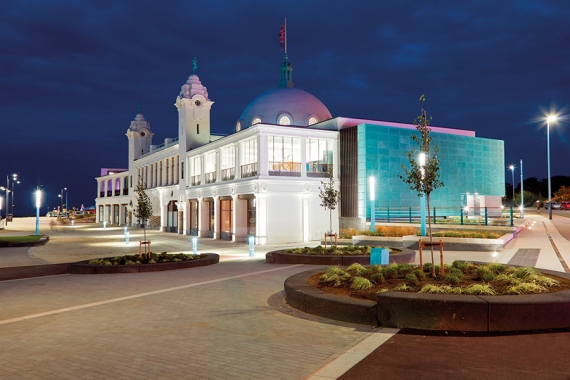 The enduring appeal of rainscreen cladding panels is due to a number of factors including increased choice of materials and finishes, hanging systems that make installation easier and advances in bespoke manufacturing capabilities that result in shorter schedules on site.

It is a fact not lost on many that rainscreen cladding works particularly well when fitted alongside older structures. When combined with perforated, coloured, ceramic or any of the other multitude of finishes it can set off an existing building to great effect.

There are many existing buildings in the UK that are in need of an upgrade, with architects tasked with repurposing them in order to create a design that appeals to a new generation of owners or occupiers, whilst still retaining elements of its heritage.

With the advances that have been made in external facades over recent years however, architects can give old buildings a completely new appearance through over-cladding or erecting new structures alongside. More often than not, rainscreen cladding materials that offer some historical context are specified so that even if contrasting colours or materials are used, the building still manages to retain a link to the past – with copper being a good example.

In fact, having been used on buildings for centuries copper is proving extremely popular for regeneration projects. Take the refurbishment of Spanish City in Whitley Bay for example.

Spanish City is a collection of grade II Listed, Edwardian seaside pleasure buildings with a Renaissance-style frontage, and outdoor social spaces. Built in 1910, the iconic structure, which once included a concert hall, restaurant, tea room, ballroom and funfair, attracted thousands of people from across the UK until it fell into disrepair in the 1970s. Although the building closed in 2002, it has remained a local beacon and so became the focal point of North Tyneside Council’s £36m seafront masterplan, undergoing a £10m restoration and regeneration to bring it back to its former glory.

As a listed building protected by English Heritage, it was essential that the redesign by ADP architects retained as many of the building’s original features as possible, including the copper Terpsichorean female figures or ‘dancing ladies’, which were restored and positioned on top of two redeveloped Cupolas. Alongside this was the addition of a bold new extension featuring Proteus SC perforated TECU Patina.

ADP Architects specified our TECU Patina for Spanish City, a copper material that features the natural green patina from the outset, as it created a beautiful aesthetic that is distinct and contrasts with the white of the original structure, whilst still complementing the ‘old’ copper finish of the dancing ladies.

The homogenous pattern featured on the perforated cladding covers the entirety of the facade on the new extension, making it difficult to discern the position of the different floors and giving the structure a monolithic, colourful presence that is able hold its own against the imposing white dome on the original building. A design which was applauded by the judges when ADP architects secured a RIBA North East Award 2019.

The redevelopment project was also named winner of the Tourism and Leisure category at the RICS Awards 2019 for the North East. RICS judges said the regeneration of Spanish City has brought the heart back to Whitley Bay, transforming a declining waterfront building into a shining beacon of hope and prosperity.

As well as a juxtaposition of colour, the round holes of the perforated panels also creates a contrast with the right angles of the surrounding cityscape, whilst mirroring the internal layout as a defining feature of the building is its extremely complex geometry. In fact only four rooms have walls in a square format, every other space is curved or a polygon, including the impressive rotunda which the panels were designed to meet.

The perforated copper cladding panels were fixed over extensive glazed areas at Spanish City, so both sides were visible by people inside the building and those outside. This presented an engineering challenge because the architects envisaged large perforated panels due to the sheer size of the facade (larger cladding panels on large facades can look more visually striking), which can require thicker gauge metal.

Working with ADP architects, we devised a rear supporting aluminium PPC framing system that was discrete and avoided having to increase the thickness – and cost – of the copper material. The outcome was that it enabled the panels to be designed to meet the maximum optimisation of material, whilst meeting the challenging geometry of the project – the perforated cladding was over large glazed areas, meaning people could see outside from inside and vice versa. That meant the supporting framework could not interrupt the sightlines.

After more than two years of redevelopment work by the Robertson Group the magnificent building is back to its former glory, transformed into an impressive mixed-use leisure venue that once again acts as a hub for tourists and members of the community.

Spanish City shows that advances in rainscreen cladding materials enable architectural designers to satisfy our desire to retain culturally significant spaces, yet still create buildings that inspire the next generation of people that use them.

By combining old and new, Spanish City remains an iconic part of Whitley Bay’s heritage and a striking example of how contrasting architectural styles and materials can work together.

Proteus Facades offers a wide range of TECU copper and copper alloys in the UK. This includes TECU Copper, TECU Bronze, TECU Brass, TECU Gold, and TECU Zinn. Some of these materials are also available pre-patinated, which bypasses the gradual weathering process, so that the cladding panels take on the beautiful earth tones from the day the facade is installed.