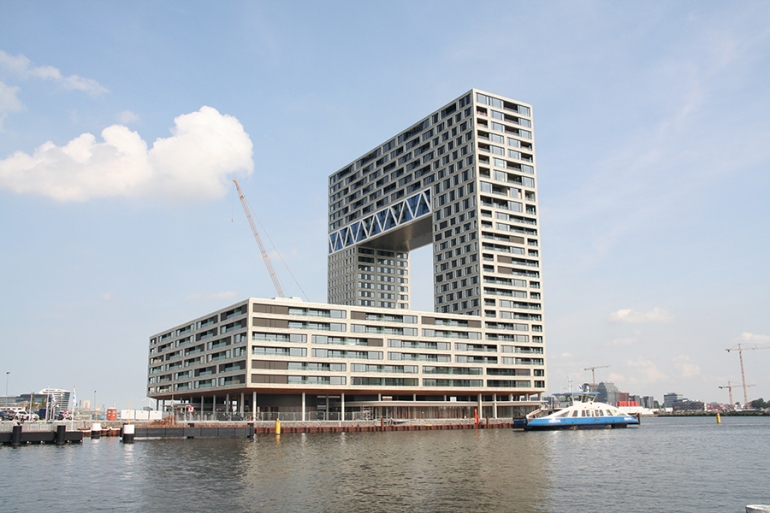 The Golden Gate of Amsterdam

The Pontsteiger building rises up to a height of 90m above the waters of the Houthaven port, making it one of the tallest structures in Amsterdam. To ensure a waterproof, air-tight building envelope, CARLISLE CM Europe EPDM products were used for waterproofing facade and walkways.

any councils and developers are becoming increasingly aware of the potential offered by centrally located, former industrial and commercial spaces, which are then mostly converted into office and residential districts in the course of large-scale urban development projects. Well-known examples in Germany include the HafenCity in Hamburg and the Überseestadt in Bremen. On Amsterdam’s western waterfront, what was once a lumber port is undergoing a similar transformation from an industrial location into a popular waterside residential district. Where timber was once loaded onto freight liners, a vibrant green urban district is now part of the landscape. Around 2500 flats, 70 berths for houseboats, plus schools, restaurants and cafes will be built by 2020. Another visible landmark in this new district and an eye-catcher in Amsterdam’s skyline is the 90m-tall Pontsteiger residential building, designed by the local architectural firm Arons & Gelauff Architects.

The XXL residential building is prominently positioned in the new district: at the end of a 200m-long dam in the heart of the Houthaven, the point where three ferry lines connect the districts of Amsterdam via the waters of the River IJ. Appropriately, the Dutch word ‘pontsteiger’ means ‘ferry terminal’ in English. The large building consists of a U-shaped, six-storey base structure elevated by 7m, enveloping a waterside plaza. Underneath this base structure are four glazed pavilions housing the entry lobbies for the flats, as well as mostly public spaces like restaurants, bars and cafes. At the open end of the block structure, the view of the water is framed by two 60m-tall towers connected by a 48m-wide bridge structure, which forms the head of the 90m-tall building. Four steel girders were used to bridge the two towers. Each of the 47.5m-long and 9.5m-tall steel trusses weighs between 56 and 78 tonnes. Two special 500-tonne cranes were used to hoist the girders into place.

“The unusual shape was developed with the future inhabitants’ preferences in mind. The demand for living space is greatest either at the top or bottom of the high-rise buildings. The Pontsteiger design concept simply minimises the space in between,” explain the architects, describing their design idea. The Pontsteiger contains a total of 318 flats between 65 and 410m² in size. The top eight storeys contain 66 luxurious owner-occupied flats; the two towers and the base contain 252 rental flats. Each of the 318 Pontsteiger flats has a walkway. The Pontsteiger building’s facade structure consists of multi-layered concrete elements with matching walkway surfaces. The large-scale sandwich elements were all prefabricated and then installed on site. There is a marble white concrete grid with a playful pattern encased in the outsides of the facade, complemented by the bricks hand-glazed in green and bronze shades. The interplay of colours is reminiscent of a chameleon, as it creates a facade that has different shades and hues depending on the light and time of day. “Depending on the sun’s position, the facade has a different green to golden shimmer,” explains Arnoud Gelauff. It is this golden glow that earned the gate-shaped building its nickname, Golden Gate.

A multitude of windows and the walkways’ glass fronts are arranged across the large sandwich elements. To meet the energy requirements, the facade-side concrete elements aren’t just fitted with internal thermal insulation layers; the joints between the elements and the ones connecting to the integrated window areas had to be designed to be airtight and windproof.

Prefabricated HERTALAN EASY COVER EPDM strips and waterproofing sheets were used for the Pontsteiger both in the facade elements and the walkways. Only the construction joints between the large concrete elements had to be closed on site to make the facade structure airtight and windproof. The walkway floor consists of a concrete structure floor, a bitumen vapour barrier, rigid foam insulation, loose-laid EPDM sheet, tile backers and tiles. To ensure maximum attention to detail, all walkways were only measured after installation, so the sheets could be cut to size and applied on site. “The EPDM is folded over and rolled back on the edges and rising structural components. Afterwards, the EPDM strips from the elements are placed on the sheets and bonded. This makes the junction between the facade and balcony floor waterproof and airtight – guaranteed,” explains Dennis Aldridge, Key Account Manager for Facade & Technical Rubber Products at CARLISLE CM Europe.

To conclude, this large-scale project once again showcases the versatility and flexibility of EPDM membranes on facades and walkways. Made-to-measure sheets have made installation fast and efficient across flat roofs, facades and the landscape.