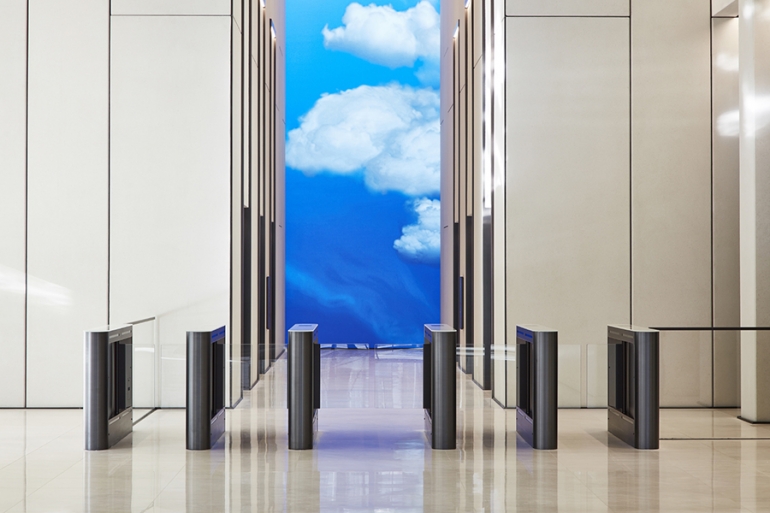 hefts from the workplace can be more damaging than you would think. Cash, computers and personal documents can be taken with ease, whilst the consequences for a business of losing intellectual property or having an IT system hacked from the inside can have a much wider impact. This is why building designers need to make sure that their buildings deter would-be thieves.

A multi-layered approach can extend from the outer perimeter to areas within the building, including controlling access to only authorised people. For instance, it is common for office windows to be fitted with secure locks, whilst alarm systems, manned guarding and perimeter intrusion detection mean the premises are protected at night. All these offer good protection, although it still doesn’t address one of the most common ways in which thieves gain access to commercial buildings and that is simply by walking through the front door during working hours. Unfortunately, they rely on the fact that if there are enough people working in a building, they won’t be challenged.

Improving security in commercial buildings needs to be multi-layered. A good choice for many buildings is a speed gate or security portal that incorporates intelligent anti-tailgating features. Tailgating is where an unauthorised person, either forced or accidental, closely follows behind an authorised user to gain access.

A considerable amount of research and development has gone into making sure speed gates and security portals prevent tailgating. These entrance control solutions now provide building owners and managers with the capability to ensure that only valid people gain entry, and unauthorised users are denied access.

The latest intelligent anti-tailgating solutions use accurate infrared sensor detection that causes the glass wings on speed gates to close on unauthorised users who attempt to follow closely behind the person with valid access. We also have the ability to enhance the level of security by incorporating additional features such as high glass wing gates, glass balustrades and pressure-sensing tops to avoid speed gate vaulting.

A variety of third-party access control devices including biometrics (facial recognition, touchless technology and QR readers etc.) can also be incorporated. Meesons’ speed gates are equipped with emergency contacts which allow the units to ‘fail-safe’, avoiding the need for a separate emergency exit.

In certain situations, for example, in an unmanned area or an area open to the general public, determined thieves may use force to gain entry and here security portals are a good choice because they create a robust physical airlock entry barrier. An effective way of making sure your security portal can withstand a physical attack is to specify one that is approved to LPCB’s LPS 1175 standard. This standard is specified across many different sectors including education, finance, healthcare, manufacturing, the public sector, residential, retail and utilities.

Until recently, specifiers had to make compromises between safeguarding building occupants and retaining aesthetics of the entrance area. That’s because they really only had two choices:

• Specify a low-level security solution that looked aesthetically pleasing, such as a revolving door. However, these aren’t designed to resist a forced entry attempt and wouldn’t meet LPS 1175.
• Specify an LPS 1175-approved doorset that creates a robust physical entrance barrier but won’t prevent tailgating, and because they have minimal glazing, usually look very austere, meaning they are visually unsuitable for many buildings.

Neither of these options were ideal, although that changed when we gained LPS 1175 approval on our C190 and C3-S1 to S3 Cylindrical Security Portals. Not only are they now an approved glazed entrance solution but they are aesthetically pleasing with customisable finishes, meaning they are suitable for prestigious entranceways as well as preventing tailgating and being suitable for wheelchair users. That makes them a great alternative to revolving doors.

LPS 1175 testing is carried out by BRE, using the test formulated by the LPCB, an organisation that has extensive input from Government, insurance industry and police forces. Within the LPS 1175 certification standard, there are a number of different ratings associated with the level of security provided by the approved products. For instance, the C190 and C3 security portals have achieved a security rating of SR1, SR2 and SR3. The SR3 version provides resistance to determined attempts at forced entry using a range of techniques including those that involve the creation of noise. It’s also worth bearing in mind that our SR3-approved portals incorporate bullet-resistant glazing – BR3/S EN1063.

In addition to withstanding forced entry, the LPS 1175-approved security portals have achieved Secured by Design accreditation. This is the national police initiative to help design-out crime through the use of high-quality, innovative products and processes. The security portals have to adhere to rigorous test standards required by the police.

Most crime can be avoided by reducing the opportunity for it to happen. Taking a multi-layered approach to security allows you to specify an appropriate physical entry barrier that addresses this and reduces the risk of criminals taking advantage. For medium-risk buildings, speed gates that incorporate anti-tailgating measures remain an effective layer. As the risk of unauthorised and determined entry attack increases, which can often be linked to the value of items inside the building, business owners and facility managers will expect that their premises are ‘hardened’ against thieves with LPS 1175-approved security portals.