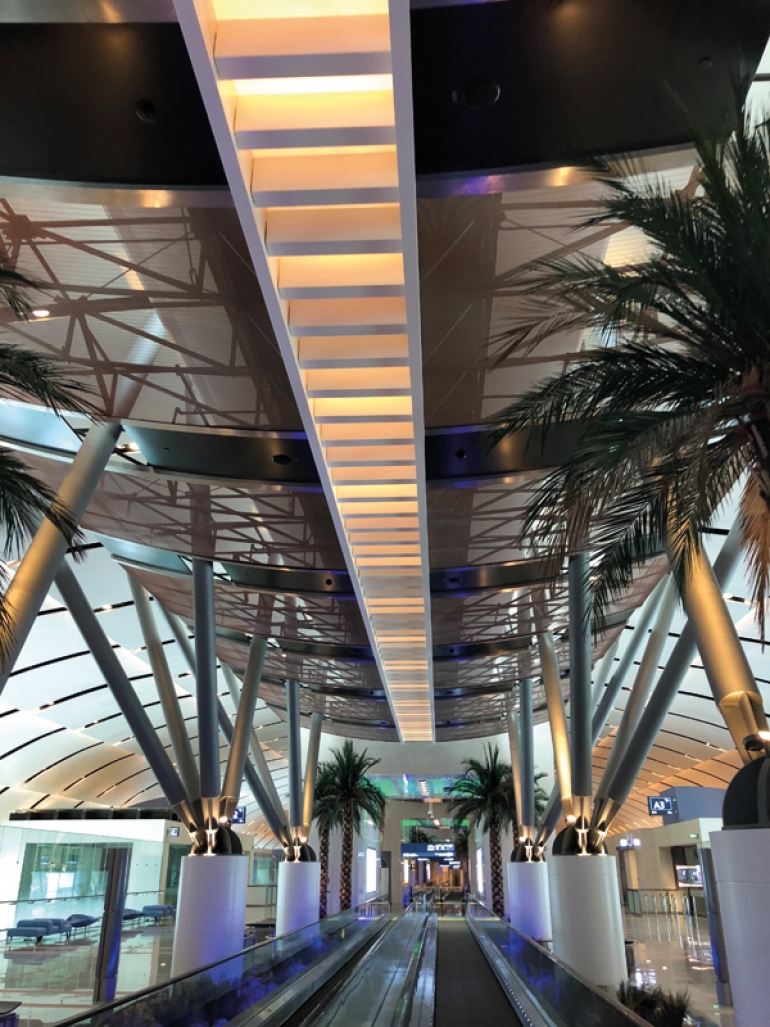 As one of the most sparsely populated countries in the world, Oman has transformed in just five decades from an underdeveloped Bedouin country to a modern state. Today, the Sultanate in the south-east of the Arabian Peninsula is considered the safest country in the Middle East and, as such, is becoming an ever-more attractive destination for business and leisure travel. In order to keep pace with the rapid growth that this has brought about, the Gulf State is investing billions in expanding its airport infrastructure.

he largest and most significant project is the reconstruction of Muscat International Airport, designed by Danish architect practice COWI/LARSEN. In operation since 1972, it experienced the third-largest increase in passenger numbers worldwide in the period 2012 to 2016, according to figures from the International Air Transport Association (IATA). The reconstruction was performed to the latest technical standards and combines great convenience with high-class aesthetics. Metal fabric from GKD – Gebr. Kufferath AG (GKD) – makes a considerable contribution to the understated elegance of the passenger terminal. Fascinating ceiling and wall solutions, room dividers and large-scale transparent media facades from the MEDIAMESH family are setting new standards for contemporary airport design.

Oman’s coastline is almost 2000km long with picture-perfect beaches reminiscent of the Caribbean and a fascinating underwater world. Combined with its spectacular mountain and desert landscapes far from the tourist hoards, this makes the country an inside tip for those seeking a relaxing vacation and adventurers alike. Oman pairs this extraordinary diversity of landscapes with authenticity and discreet luxury. You won’t find the gigantomania of the Emirates here; there are neither skyscrapers nor artificial natural wonders vying for attention. Instead, oriental souks and an architecture that calmly reflects the evolved culture of the country enable you to experience the Orient as if in a fairytale. The country draws its special charm from a natural interplay between the flair of Arabian Nights and cosmopolitan modernism.

Just 30km west of the capital, Muscat, lies the largest and most heavily frequented airport in the Sultanate. As the air traffic hub for Oman, it serves 55 international destinations on the Gulf, in the Middle East, Europe and the Far East. Its $1.8bn expansion is the largest infrastructure project in the history of the Sultanate. A second runway and a new control tower – as a requirement for serving wide-bodied aircraft like the A380 – marked the start of construction in 2014. The opening of the new passenger terminal is the response to the increase in passenger volume, which is growing by 10% every year. 14 million passengers were counted in 2017, 16.5 million are expected in 2018 and 20 million in 2020. For them, the new airport offers an ultra-modern infrastructure spanning a total area of 335,000m² with a 12,000m² duty-free area and 8000 parking spaces.

Architecturally, the building consists of three wings arranged in a row, each with three floors. It is characterised by an elegant, lightweight roof with exposed steel construction and the consistently implemented concept of inviting openness and transparency. Light, natural colours, lots of glass, steel and marble, as well as discreet golden accents create a high-class atmosphere with no overt showiness.

GKD metal fabric plays a key role in its design. Various ceiling solutions (suspended or as grid constructions), wall hangings and room dividers made from Lamelle fabric and three large, transparent media facades shape the feel of the space in all parts of the building. A total of 5865m2 of stainless steel fabric was used. A suspended ceiling above the car rental area conveys an initial impression of the extraordinarily versatile design potential of the woven texture as soon as you step into the arrivals level of Muscat International Airport. 60 panels, each around 1m wide and 2m long, form a grid ceiling whose shimmering elegance is highlighted by downlights integrated into the fabric. Aluminum frames hold the pretensioned panels, which were also riveted to a central rod in order to ensure that the tension is maintained. The client opted for the same system in the third wing, where 200m² of this grid ceiling mark the transitions to both the north and south piers. The immigration counters mark another optical highlight in the central wing with their projecting roofs made from stainless steel fabric. 52 panels – tensioned in frames in a tightly packed arrangement – cover the desks here over 465m², creating a representative welcome area. Light strips in the joints give rhythm to the canopy and, together with diffused reflection from indirect lighting, make the fabric appear different from every angle.

The largest and most spectacular use of fabric in the new airport awaits passengers in the three piers. Over 3210m² of a custom fabric specifically developed for Muscat make for a very special spatial experience here. 210 fabric elements shimmering in a soft gold tone form semi-transparent modern baldachins above the moving walkways flanked by large palm trees.

Originally, the client had considered the delicate GKD bronze fabric Mandarin for this construction. However, as this was not suitable for this application in terms of both stability and colour accuracy – bronze forms a patina under the influence of humidity – GKD developed a new Lamelle fabric with a similar look. Aluminium weft wires coated a bronze colour in a continuous process and natural-finish stainless steel warp wires combine fine optics with low weight and the required robustness. As such, the steel construction above the panels shines through the delicate membrane and gives the fabric the feel of a leafy canopy shot through with veins. This effect is underlined by a light strip running down the middle, the branches of which distribute their mild light diffusely. In every pier, 70 of these bronze-coloured panels gently reflect light and movements. No less impressive are the canopies of the six escalators from the arrivals to the departures level and onto the hotel. Four panels made of stainless steel fabric, each almost 13m long and up to 1.25m wide, follow their course in a giant curve along the entire length. Hung freely with 240mm-wide joints, they cleverly conceal the technical installations and stage the escalator journeys as a glamorous event through refined reflections.

In the retail area in the third wing, GKD stainless steel fabric provides decorative highlights in the form of large-scale wall hangings. 20 panels, each 6m high and 3m wide, were mounted vertically in front of a high glass parapet like oversized wall paintings. Their metallic shimmer lends the glass balustrade an elegant air without impairing its transparency. Their optical counterpart can be found on the opposite side in the form of a further 12 panels in front of a white wall – each of them 7.5m high and 3.35m wide. 10 panels with a total area of 160m² flank each side of a large mixed media screen. Suspended between the floor and ceiling 1.5m in front of the hotel windows, they filter the hotel guests’ views of the artificial gardens like a fine veil. In the oversize baggage reclaim area, the attractive fabric also demonstrates its functional properties in quite an impressive way; ceiling-high room dividers with integrated sliding doors form a security area with restricted access. As an elegant partition, however, they provide an unencumbered view of the goods arriving on the baggage belt at all times. Understated light reflections also transform this application into a high-quality eyecatcher.

After almost 10 years of planning and construction for the airport, the result speaks for itself: in terms of design, passenger handling efficiency and recreation quality; the new passenger terminal of Muscat International Airport is exemplary in many respects for pioneering airport architecture. The solutions made from GKD metal fabric that were used here provide virtually boundless inspiration for realising such architecture – functional versatility at its best.