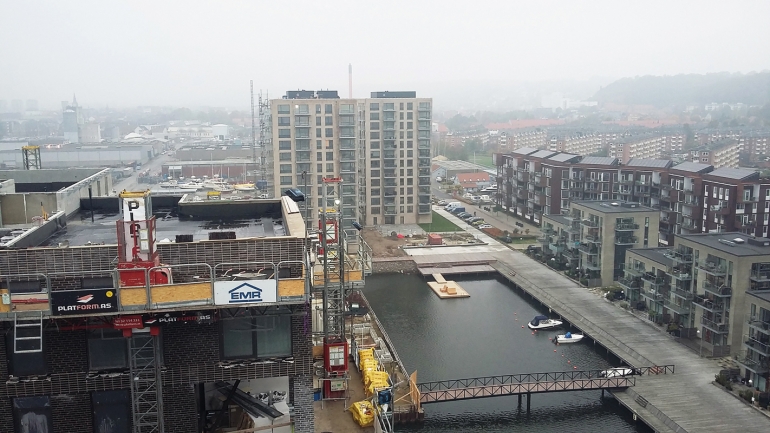 The principles behind Building Information Modelling (BIM) have been around for years, although its integration into live construction sites is still relatively new. However, as Stuart Cadge, Sales and Marketing Coordinator at GeoSLAM, explains recent developments in hardware and software are making it more accessible to even smaller firms.

ommercial pressures to complete projects on schedule, within budget and to the right specifications have never felt greater. It’s little wonder that architects, project managers and other stakeholders increasingly see BIM as essential for making their operations more efficient.

Using cloud-based software, project stakeholders can gain a real-time view of the building (or asset) in the form of a ‘digital twin’ – a highly-detailed, interactive 3D model. Any changes in the design, including associated costs, are built into the digitised plans and shared with all parties (wherever they are in the world) in a matter of seconds, keeping them informed, enabling them to take appropriate action and, ultimately, ensuring that all parties are on the same page.

Historically, the project architect would have needed to manually update the drawings and then share the information with the various contractors. With multiple documents in circulation, project managers had to ensure the latest plans were being followed while trying to rein in the costs. All this was in addition to other unanticipated problems that require remedial work, such as unstable ground or unexpected finds – be they existing utilities or even the discovery of historical remains.

As well as speeding up projects, professionals know that BIM makes compliance more straightforward since ISO certifications can be easily shared through the network. Even once the building element to any project is complete, BIM plays an important role in its lifetime (inventory, facilities management, refurbishment/extension) and, eventually, demolition.

Such is the transformative power of BIM that it forms a major part of the Government’s Digital Built Britain programme, unveiled last year. It states that BIM will “support the efficient design, delivery and maintenance of infrastructure and buildings” – which, in turn, helps to boost productivity, professional standards and ensures the development has a long and efficient lifetime.

The country’s biggest construction companies, including the likes of Interserve1 and Kier Group2, have invested heavily in their digital engineering capabilities in recent years. By embracing BIM, Interserve have reduced materials waste by 20% – enabling them to offer better value for money than ever before, increasing confidence for investors and setting them on the path to secure contracts for large-scale capital projects.

Improving time and efficiency in large construction projects can essentially protect a business from severe project overspends – and we need look no further than the recent demise of Carillion3 to see what can befall even the largest of industry giants. The failure to keep costs within budget resulted in the construction firm’s collapse into liquidation – threatening the viability of live hospital construction projects such as Royal Liverpool and Midland Metropolitan. The company was overstretched and over-budget with the fallout hitting thousands of smaller suppliers4. Utilising methodologies and technologies which encourage collaboration, increase efficiencies and reduce waste could help prevent such devastating failures in the future.

Despite this harsh lesson, digital technologies are by no means universal, and many firms still see barriers to adoption. In its National BIM report, the National Building Specification (part of RIBA) found that while nearly 80% of those surveyed see it as “the future of project information” and 72% still “don’t understand the benefits5”. Furthermore, 65% cited lack of client demand as a reason why they had failed to harness the technology, which is certainly at odds with the direction that the Government and industry professionals are moving.

There’s no doubt that BIM is a disruptive force, demanding a radical shift in attitudes and operations. The truth, however, is that BIM and other digital technologies have never been more accessible, even for SMEs working on relatively modest projects. One of the most significant developments in the field is the deployment of mobile mapping tools, capable of rapidly capturing building and landscape data with a handheld, lightweight device. With this, project teams can generate highly-detailed 3D models and 2D plans that allow for better decision-making.

Using a laser sensor, mobile mapping systems can scan and record any structure or space, including bridges, tunnels and, of course, commercial and residential buildings.

But while some use GPS, others are built on a technology called Simultaneous Localisation and Mapping (or SLAM), first developed in the robotics industry. Unlike GPS, which relies on a direct line of sight to satellites, SLAM has no such requirement – allowing its use inside buildings, underground and in other hard-to-reach or potentially inaccessible areas.

As well as being a valuable tool on large-scale schemes, where rapid and frequent measurement of the site is crucial, this equipment is proving just as important for those working on smaller projects – as was the case for a land survey specialist we recently worked alongside.

Tasked with producing 2D floorplans of a nursing home, which was occupied by vulnerable residents 24-hours a day, the two-person team used GeoSLAM’s handheld ZEB-REVO device to capture the 3D spatial data required. In essence, they required a solution that enabled them to scan every resident’s room, along with staff quarters and communal areas, without using intrusive and time-consuming traditional survey equipment.

Thanks to the handheld device (which can collect more than 43,000 measurement points per second with an average accuracy of +/- 15mm), the operatives scanned the building in 30 minutes, with each of the rooms taking just 10 to 20 seconds to complete. Within 24 hours, they had complete 2D floorplans, which formed the basis of future building work. Without handheld technology, a process like this would have taken around three days, including post-survey time to draw and check the plans, not to mention the cost, disruption and emotional stress that would have been caused relocating the residents.

It’s worth pointing out that a process like this is incredibly straightforward, requiring minimal training for users, who simply walk around the building holding the device. Innovative software allows for real-time data visualisation and processing, whilst the scan is taking place – allowing for on-the-spot progress checks and removing the need entirely for post-processing of data.

BIM is rapidly becoming the norm, alongside other digital technologies which add value or greater insights to the industry. In particular, VR, AR and AI, which are already starting to transform architecture, engineering and construction. This means surveyors must now strive to embrace and incorporate these new tools into projects alongside already established technology such as BIM, or risk falling behind the competition.