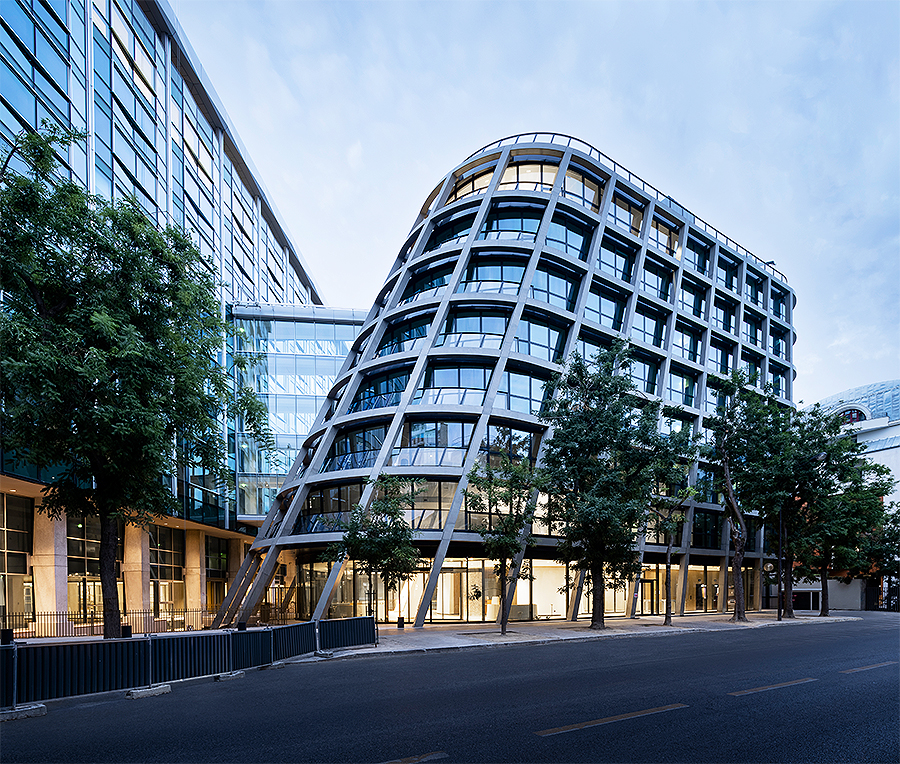 In the summer of 2022, Biome became the new reality for the inhabitants of Avenue Emile Zola and Rue Violet in the 15th arrondissement of Paris. This new venue is the culmination of a five-year project involving two Parisian architect practices.

The starting point of this venture is an ambitious challenge led by Société Foncière Lyonnaise, the oldest French property company. The brief was to successfully re-invent the emblematic historic headquarters of the SMABTP and to develop a 24,000m2 latest-generation work environment. The project involved the heavy restructuring of the heritage building and creating of two new buildings.

In this joint exercise and considering the importance of this heritage and its unique urban and landscape context, the architects and designers have defined an intervention framework that guided the operation throughout its development. The reflection on the valuation of this real estate heritage considers the fundamentals of its original conception, inventing a new contemporary destination while realising the equation of a “better urbanity” without ever disguising the iconic architecture. This is the challenge the architect firms Jouin Manku and YMA have focused on.

Biome demonstrates that it is possible to combine the city, heritage and new architecture and implement it in a lively residential area, far from the major Parisian business districts.

Perpetuating the natural conditions of the block and the sustainability of the architecture also means demonstrating consistency in the architectural choices, the construction method and the energy performance of the building. The environmental strategy is developed, chosen and created around two main axes: low carbon and biodiversity.

The construction process is part of the low-carbon re-use approach by repurposing certain original materials in situ and ex situ. 80% of the existing floors have been preserved, and 50% of the false floors have been restored. The granite is made by crushing the serpentine stone of the old facade, and bio-sourced insulators and materials with recycled content were favoured.

On the biodiversity side, the project improves the site’s ecological value in compliance with the Climate Plan of the city of Paris. On this urban block, eco-developable spaces are created to maximise the potential of urban biodiversity. The density and component of local plant species (planting a diversity of 35 trees, 25 vines and new flowering shrubs) are proposed for each outdoor space that can receive a habitat and promote biotope diversity.

The project involves installing aromatic crops on roofs, which will be grown at the request of the site’s company restaurant. It is interesting to note that the project doubles the vegetated area heavily, thanks to the creation of terraces and the re-invention of the heart of the terrain. Overall, this enrichment makes it possible to contribute to the renaturation of the city.

Commenting on the project, Sanjit Manku says: “From the earth emerged a new structure, the exoskeleton of the Zola Pavilion. Like two trees of varied species, in the heart of a wooded garden, the two buildings dialogue with each other.”

“Together, they create a new ecosystem in the heart of the 15th arrondissement of Paris,” adds Patrick Jouin. “A narrow footbridge connects them and spans a green flow. Nature enters inside through its fluid forms. The course is thought of as a choreography; it makes its relationship with space natural and instinctive.”

“Based on what already existed, the objective was to recompose a new contemporary architecture visible from the inside and the outside. The importance given to flows affects the articulation of spaces. The contribution of natural light in the spaces was also a structuring priority of the design. We sought to offer maximum transparency to allow permanent visual breaks, especially towards the garden,” concludes Yrieux Martineau.