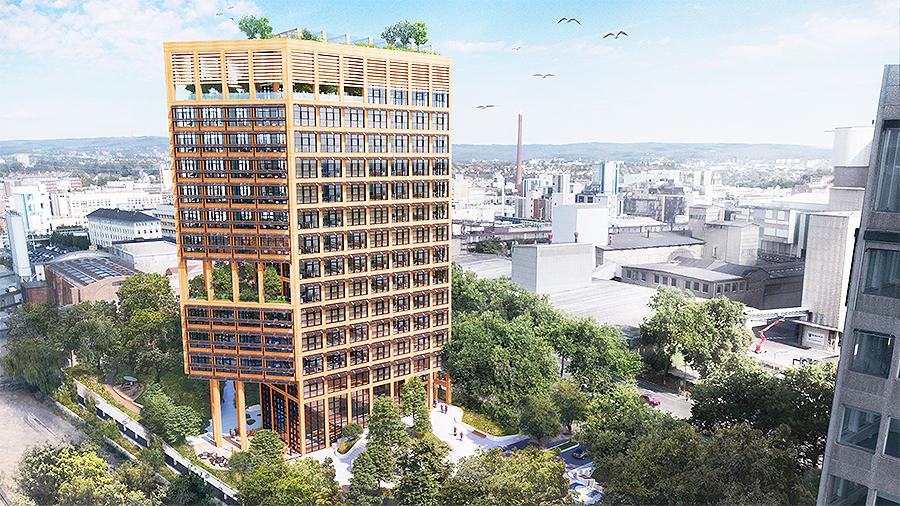 The H2-Office-Tower is part of a redevelopment site located on Wiesbaden’s Rhine riverfront that serves as a model for sustainable, smart and future-oriented urban development. The project involves converting a former industrial wasteland into a campus-like site that considers all the requirements of a modern office and work culture in a densely-populated urban environment. The CO2-reduced and resource-saving redevelopment and green densification create urban biotopes and encourage micro-mobility. 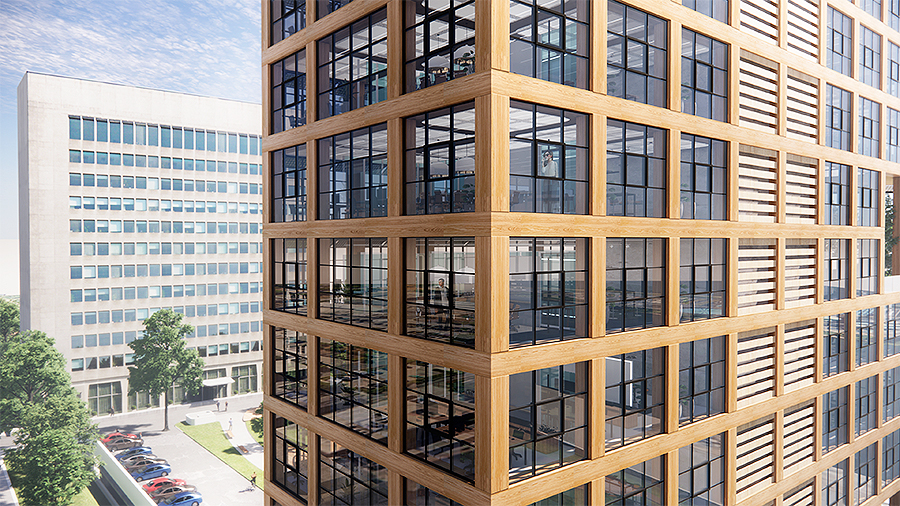 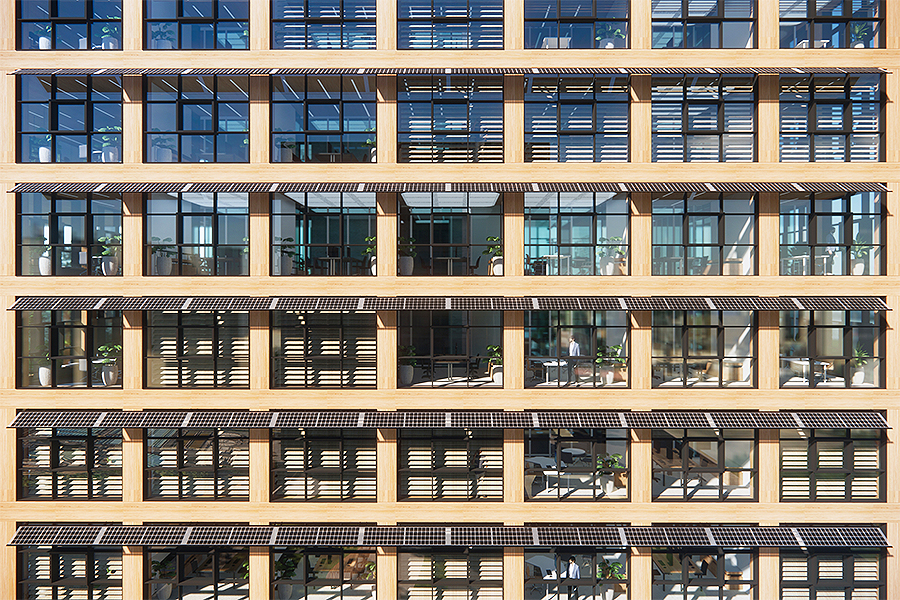 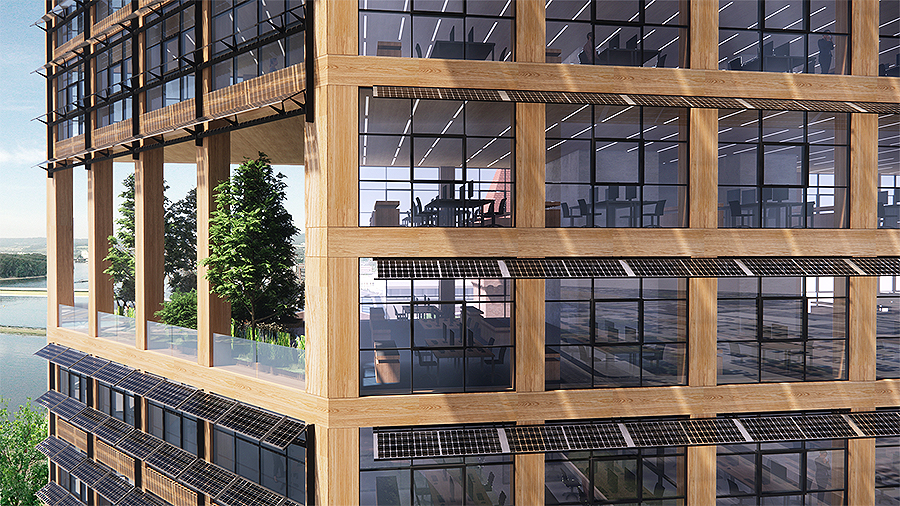 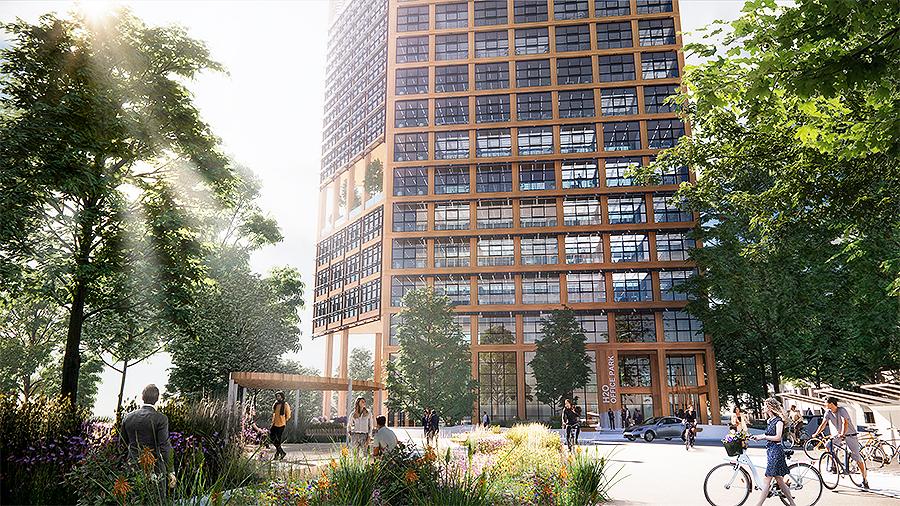 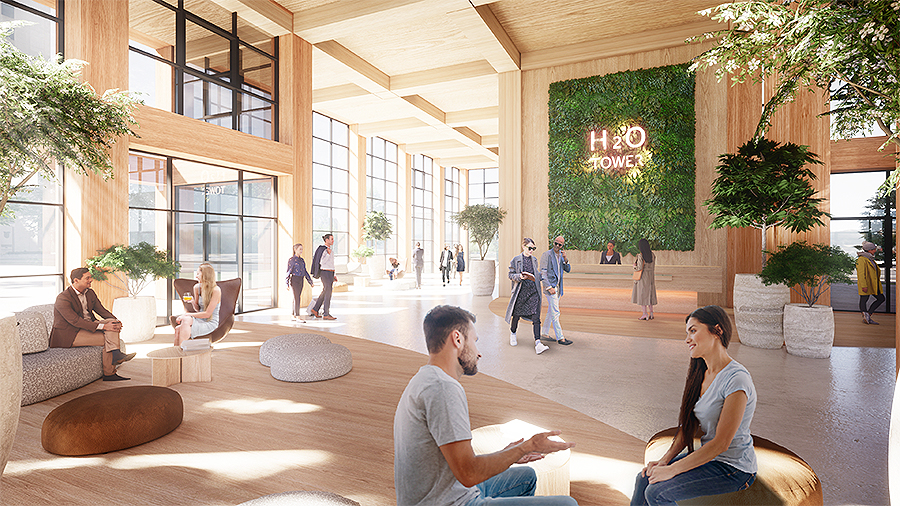 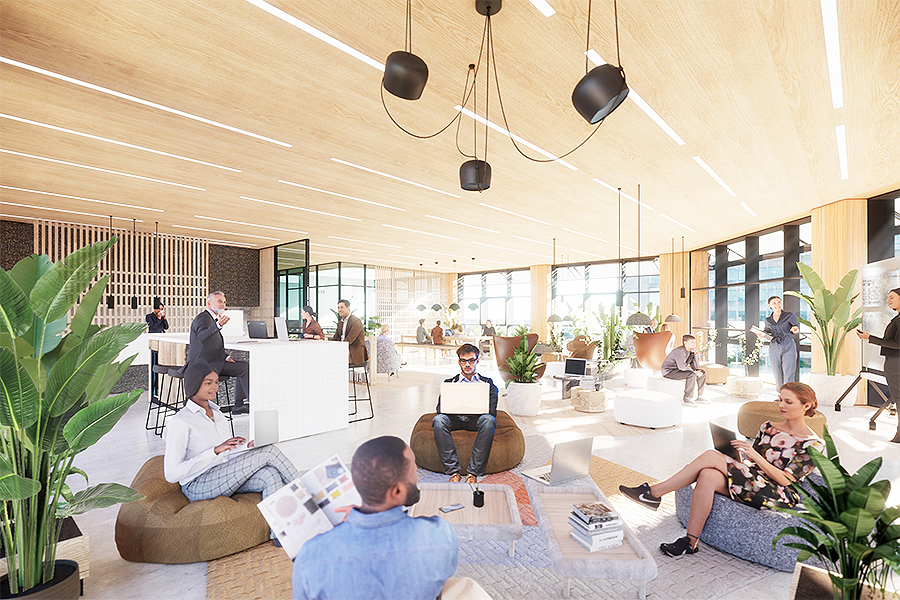 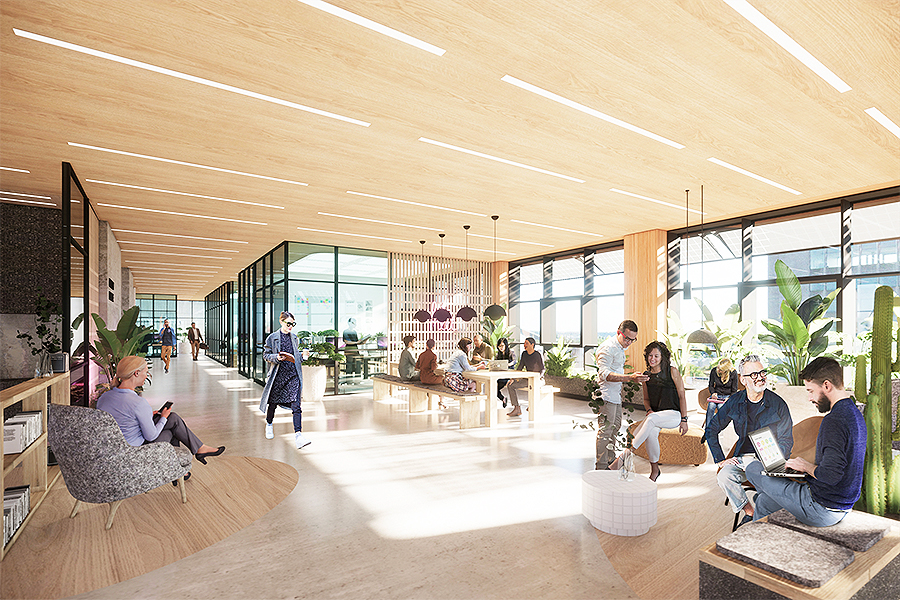 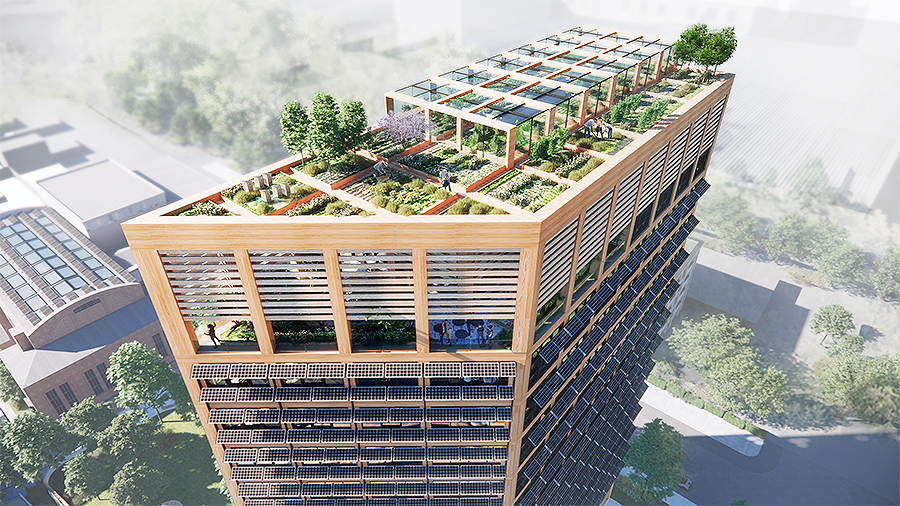 The architectural studio 3deluxe was commissioned by the Wiesbaden urban development company SEG to identify various utilisations and design options and to investigate how the site between the industrial park and the Rhine meadows can be developed with a promising future. The site’s innovation driver will be the construction of an appealing timber hybrid high-rise building that, along with a listed classic high-rise from the 1960s, forms the site’s core.

Primarily, climatic and energetic considerations determine the basic layout of the 15-storey high-rise building. The facades facing the sun are partially covered with photovoltaic modules, which also serve as shading elements. The orientation of the Rhine facade has been twisted diagonally and thus optimised to the sun’s position to achieve maximum efficiency from the large-scale integration of the photovoltaic modules.

The regular rectangular grid of the visible wooden structure enables modularity and prefabrication of the facade and offers a formal affinity to the listed high-rise twin. Large floor-to-ceiling window areas and their black frame structure lend the building its modern warehouse appearance and create a reference to the industrial neighbourhood.

The use of sustainable and renewable raw materials, the modular construction with a high degree of pre-fabrication as well as the recyclability of the planned building components are key features of the circular construction method. Energy generation is largely planned to be directly on the building: integrated large-scale PV systems, geothermal energy and use of the river water as a heat exchanger maximise low-emission operation.

Designing the future of work

Regarding the neighbouring high-rise building from the 1960s, the H2-Tower is given the slender form that was characteristic of that time. The core is not positioned centrally but rather laterally in the facade. This provides generous room space to accommodate modern office formats for the post-corona age: office space that is open and participative, allowing for hierarchy-free, flexible working. The basement is an incubation space for young companies, and a light-flooded foyer is a communicative platform for the entire campus area.

Green, communicative and recreational areas primarily dominate the outdoor area around the building right on the waterfront – a car-reduced, verdant site offering outdoor facilities in line with the shift in mobility, including bike parking, car and bike sharing, a bike repair shop and load bikes for transporting heavy goods. An outdoor gym, a recreation pavilion, a wildflower meadow, beehives and bird shelters condense the area into an urban oasis.

The highest veggie garden in the city

The building concept intends to provide some space for nature. Integrated into the building are several green terraces, which enhance the quality of time spent in the building and contribute to improving the city’s climate. On the roof, a vegetable garden and greenhouse are integrated to supply the in-house staff restaurant with fresh products. Bird and insect nesting areas are planned on the closed facade of the utility core. The building will be designed to be as animal friendly as possible to improve the coexistence of humans and nature in the built environment.

Commenting on the project, Dieter Brell, Creative Director at 3deluxe, says: “Architecture today has to consider many more issues than just functionality or beautiful design. The massive global challenges we are currently facing are all reflected in architecture and urban planning, giving every building project a significant relevance to society as a whole. Exciting times!”

Throughout Germany, people are developing riverfront areas in urban locations and transforming these into highly-attractive living and working environments. Also, the 2.7-hectare site – acquired by SEG GmbH from the Dyckerhoff company – directly on the banks of the Rhine in Wiesbaden, with buildings that are partly protected as historical monuments, marks an extraordinary and extremely attractive section of the Rhine. Its proximity to water and thus to nature allows for a people- and environment-friendly redevelopment of the site – although an industrial park in the immediate vicinity permits only commercial use.

The site’s development offers a great opportunity for Wiesbaden to enhance its reputation further as a livable and future-oriented urban location. 3deluxe, in cooperation with the urban development company SEG, investigates options for modern and economically-sensible concepts for the utilisation and the design of the area. Additional building components for the development area, like the conversion of the historic power plant hall complex, are to be reported on in the near future.