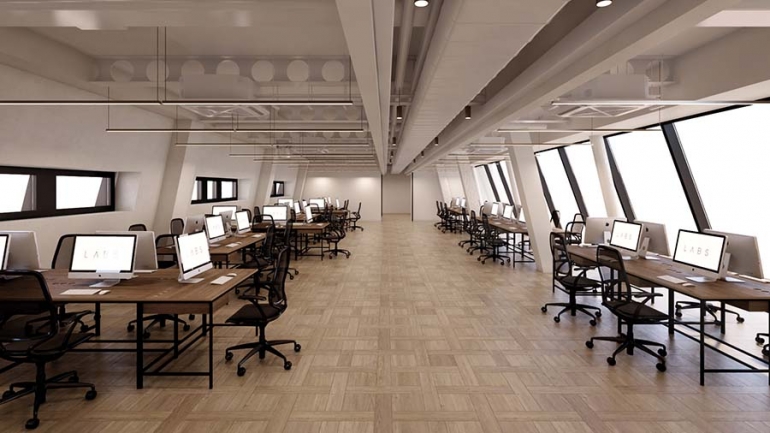 London has a wealth of heritage architecture and listed buildings that chart its success as a city and map its fortunes as a centre of commerce and banking. Preserving those buildings is important, but transforming them into assets that can continue to be useful and relevant to 21st-century businesses and working practices is equally vital.

That’s exactly what’s happening at Victoria House; a Grade II Listed office building in Holborn constructed in the 1920s in the Neo-Classical style, which is being revamped by flexible workspace developer, LABS.

As with many heritage buildings, the property requires significant upgrades to its building services to ensure that it meets the power and connectivity needs of contemporary occupiers. As a flexible workspace development, the flexibility of its building services is also important so that configuration of the interior space can be adapted as required.

Typically, the specification for retrofit electrical networks with future flexibility is a plug-and-play powertrack busbar system. This is not only quick to install but also allows tap-offs for electrical services wherever they are required across the floorplate, and the ability to move or increase these over time. One of the common challenges of heritage refurbishments, however, is shallow and inconsistent floor voids, which can make use of a standard powertrack busbar system more challenging. In this scenario, a hub system provides similar flexibility, while fitting into a reduced floor void depth. CMD’s 32A Power Hub, designed and manufactured in Rotherham, is providing the ideal solution for installation of the electrical distribution networks at Victoria House.

Fitting into the void

An imposing 300,000ft2, nine-storey building, Victoria House is being refurbished by TSK with interior fit-out undertaken by Run Interiors. The ground floor is being converted for leisure and retail purposes and levels one to nine will be flexible and contemporary offices that preserve the character and heritage of the building while offering spacious, open-plan layouts and 21st-century connectivity to support modern ways of working.

LABS is known for the high quality of its interior fit-outs and the contemporary look and feel of its office environments. Victoria House will feature high-calibre engineered timber floor finishes, exposed high-level services and a spacious, open-plan layout, retaining the existing floors and grandeur of the original ceiling heights.

The office accommodation may be spacious but, in some locations, the floor void is just 50mm deep. Consequently, the plug-and-play powertrack system initially chosen for its speed of installation, cost, future flexibility and ease of maintenance was not viable.

Mark Bacon from the project’s M&E Consultancy, Scotch Partners, explains: “We were originally looking at CMD’s Betatrak powertrack system for the project but it became clear that it would not fit in some locations, despite scabbling of the slab in some areas to maximise the available void.

“The CMD team worked with us to develop an alternative power distribution design based on a 32A Power Hub system, which enables four to be located on the side of shallow Hub units. These Hub units will be used to create an underfloor distribution network, enabling us to utilise familiar technology in a different format.”

The four on each Hub unit ensure that each workstation location has plenty of power capacity to cope with the electrical load of multiple devices on each desk, along with sufficient redundant capacity to allow for potential additional load requirements in the future. Each flexible metal conduit tap-off will deliver power locally to the required locations across the floorplate via grommets in the floor.

Although a conventional powertrack would have been viable for some areas of the building, it quickly became apparent that the Power Hub system would offer additional benefits for the project. The interior design includes sealing the floor void with engineered timber flooring, which means that maintenance of the underfloor power distribution network, or any future modifications, will have to be carried out via the grommets.

Mark continues: “The grommets are flush to the floor and lock away the under-floor services neatly, but also provide access to the Hub units in the void. This means that the electrical distribution network will be easy to maintain or upgrade as occupiers’ needs change.”

Once the electrical supply comes up through the grommets, it will feed Rotasoc power module units, manufactured by CMD which are located under each workstation, before connecting to desktop power modules.

The Rotasoc units utilise 32A busbar technology to create robust sockets that rotate a full 360º without losing contact. The Rotasoc units form part of a modular under-desk power distribution system that can provide power, data and circuit protection in a customisable plug-and-play format for each desk.

Mark continues: “The combination of the 32A Power Hub system and modular Rotasoc under-desk power module system have given us the design flexibility to create a scheme that brings the distribution network direct to the desk, while working with the existing fabric of the building and ensuring a legacy of ease of maintenance and modifications.”

The Cat A and Cat B fit-outs have already been completed for levels four and five of Victoria House, with levels two, three and six currently underway and levels seven to nine due to begin soon. In total, 828 32A Hub units have been installed so far, with 1100, and a rolling release is scheduled for completion in 2021.