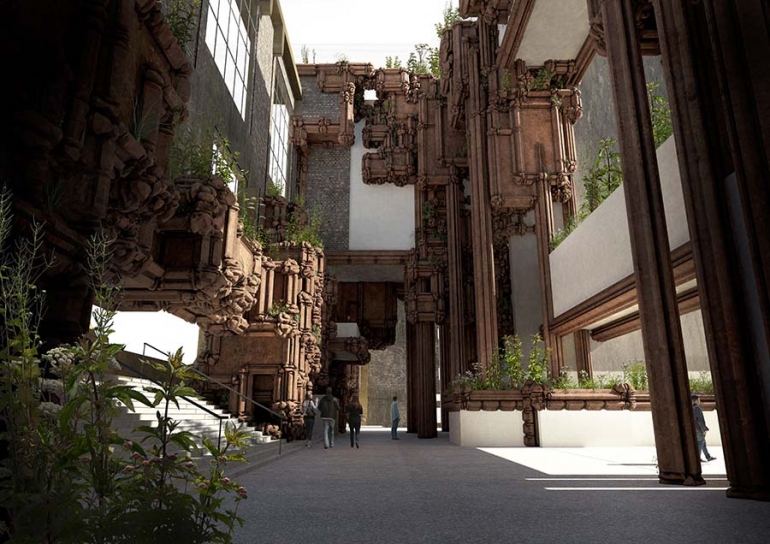 Barry Wark’s project for the Glasgow School of Art proposes the creation of new educational studios, public spaces and gardens, forming a block-wide strategy in response to the series of fires that have destroyed Mackintosh’s national icon.

The building’s existing facade is retained and restores key interiors that allow the building’s tour routes to be replicated. The studio spaces are moved into the extension creating a void in the former art school for events, gatherings and exhibitions.

The extension is composed of studio spaces as well as zones reserved exclusively for plant colonisation that aim to bring notions of the wilderness into the city. Its folded geometry characterises the building’s facade with multiple seams on every element. This intricacy exists to encourage the propagation of vegetation from seeds dispersed there by the wind. The result is plant growth in a wild and indeterminate manner inspired by the urban cliff hypothesis.

The design is inspired by the megalithic architecture of the city, historical Scottish castles and makes further references to the original building.

The proposal looks to encourage future conversation about the building two years after the second fire. It takes the position that a new block-wide development, offering new forms of public spaces and gardens in Glasgow city centre, could be more preferable than a total restoration.

Here, in an FC&A exclusive, Editor, Rebecca Kemp, talks to Barry Wark about the concept and inspiration behind his eye-catching proposal and finds out more about his career as an Architect.

Please tell us a bit about your career background.

I undertook my education in Glasgow and at the Bartlett School of Architecture, UCL, where I specialised in bio- and digital design and fabrication. I knew upon graduating that I wanted to explore a more experimental form of practice combining both academic and professional endeavours.

I spent 12 years working for reputable London firms before establishing my own architectural practice in 2015. Although rooted in buildings, the work also operates collaboratively in the set design and installation industries. I combine this work with ongoing teaching and research activities at Bartlett, exploring biophilic design and aesthetics to challenge an anthropocentric view of the built environment.

I was always interested in design and drawing. At school, we had quite a few tasks and visits to Mackintosh buildings to explore his work. At the time, I did not perhaps realise the influence it had on me, but upon reflection, it did.

Who has been your greatest influence and source of inspiration?

As mentioned, the earliest was Mackintosh, but I am sure there were many subconscious influences from my childhood. As you go through your education, you are influenced by your heroes – typically it’s who is building the most novel buildings or producing images that resonate with you.

That said, as you mature into your own position, you tend to gravitate to those you view as kindred spirits or exploring topics that are more aligned with your interests. At present, I am more inspired by ancient structures by unknown architects, exploring notions of architecture that have existed for a relatively long period in a natural, unmanaged state.

What was the inspiration behind the Glasgow School of Art proposal?

The design is inspired by the work of Mackintosh, particularly his artwork and drawings. It is also inspired by the city’s stone architecture and that of Scottish castles and ruins, much like the original building. The motive for the proposal was to offer alternative visions for the site, beyond a full restoration which will cost a lot of money and could end up feeling like an odd reproduction.

What were the main requirements for the design?

It was essential that it used the opportunity to explore more radical ideas for the site whilst still maintaining a tangible proposal for how to address the existing building. The design strives for integrity in the treatment of the existing building, restoring its best spaces; whilst simultaneously creating new spaces that do not exist in the city.

In what ways did you merge historical architecture with the design?

If you evaluate the extension element of the proposal in its form, mass and materials, it is a very Glaswegian building. The city-centre grid creates a forced perspective of many buildings where you predominantly experience it at an angle; thus the sense emerges that the stone buildings are monolithic with almost no windows as you never see a true elevation. The design builds on that notion by creating the appearance of a solid facade, through deeply recessed windows and balconies and bringing light in through the central atriums.

What was the essential element of the design?

Firstly, to hollow out most of the existing building, creating a new public art space for the city that connect to down to Sauchiehall Street. This space would show the building as it is and bring awareness to its history, good and bad. The second is the facade of the extension. It is experienced not as a sealed envelope to the external environment but as a deep, textured zone where both building users and plants (and other non-humans) can cohabit.

How important do you believe it is to integrate biophilia into our built environment?

I think the integration of biophilic design principals in our cities is essential for a myriad of reasons. That said, there is a danger that the effort to bring what is commonly referred to as ‘nature’ into our cities, simply translates into ‘greenwash’ design. We are becoming all too familiar with the lime green facades of speculative proposals claiming to be biophilic or ‘sustainable’.

We need to go beyond thinking of integrating ‘nature’ or biophilic design as green walls or simply plants – instead thinking about all the things we bundle under the term nature and if integrating these into architecture can also be biophilic.

What innovative biophilic-focused features did you integrate into this proposal?

The proposal is inspired by Lundholm’s 2006 ‘Urban Cliff Hypothesis’ comparing similarities between cities and the habitat templates of cliff faces. As cities and cliffs both have suboptimal growing conditions and yet plants, moss and other living organisms grow there. The facade creates a thick and textured threshold for water retention and natural seed distribution from the wind to take hold. It is intentionally encouraged to stain, drip and for some areas to become overgrown – and others not. It is meant to be seasonal and ever-changing.

The building is designed for ‘non-humans’ (i.e. plants, insects, dirt and moss) to take hold and become integral to its appearance, synthesising with the building’s geometry and materials, and creating new bio-aesthetics in architecture.

What biophilic designs and proposals can we expect to see from you over the next year?

Moving forward, the work will explore notions of larger time scales in the proposals, perhaps even towards geological timescales rather than societal. This will investigate ideas of assembly and disassembly; the irrelevance of programme when architecture is viewed in these timescales; and the appropriate acceleration of patina and other displays of natural phenomena to bring ecological awareness into our consciousness.