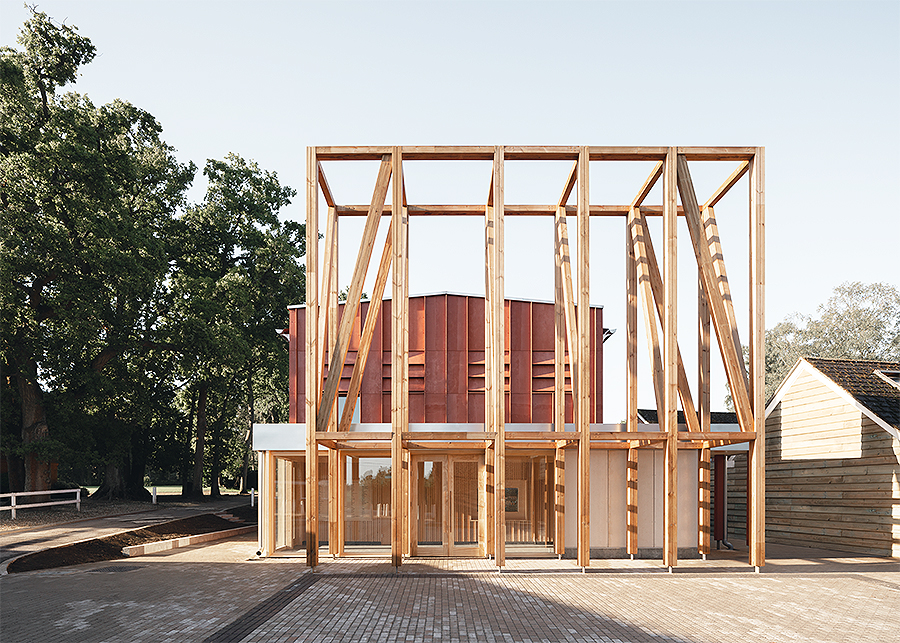 Working in partnership with Jonathan Tuckey Design, Vale Southern Construction has constructed an award-winning sustainable building, which is home to a theatre in the grounds of an independent Berkshire school. 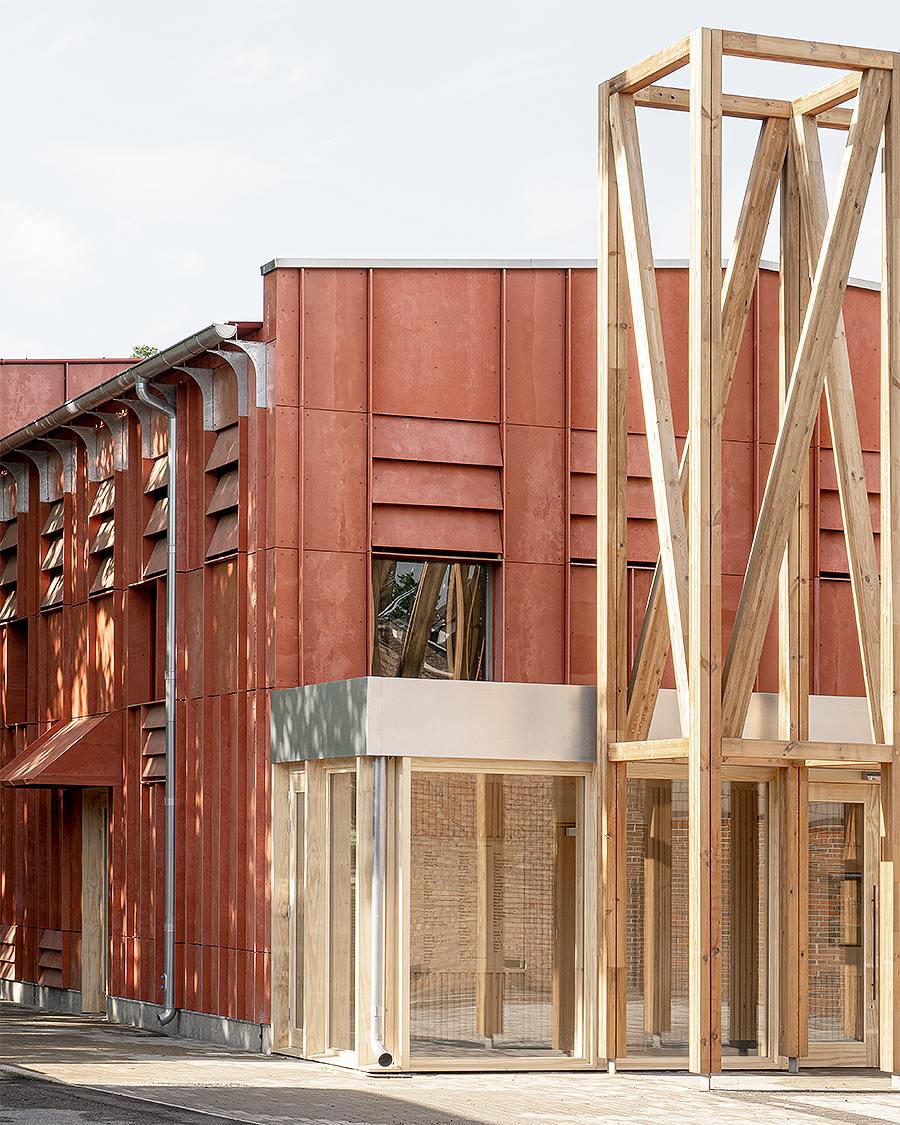 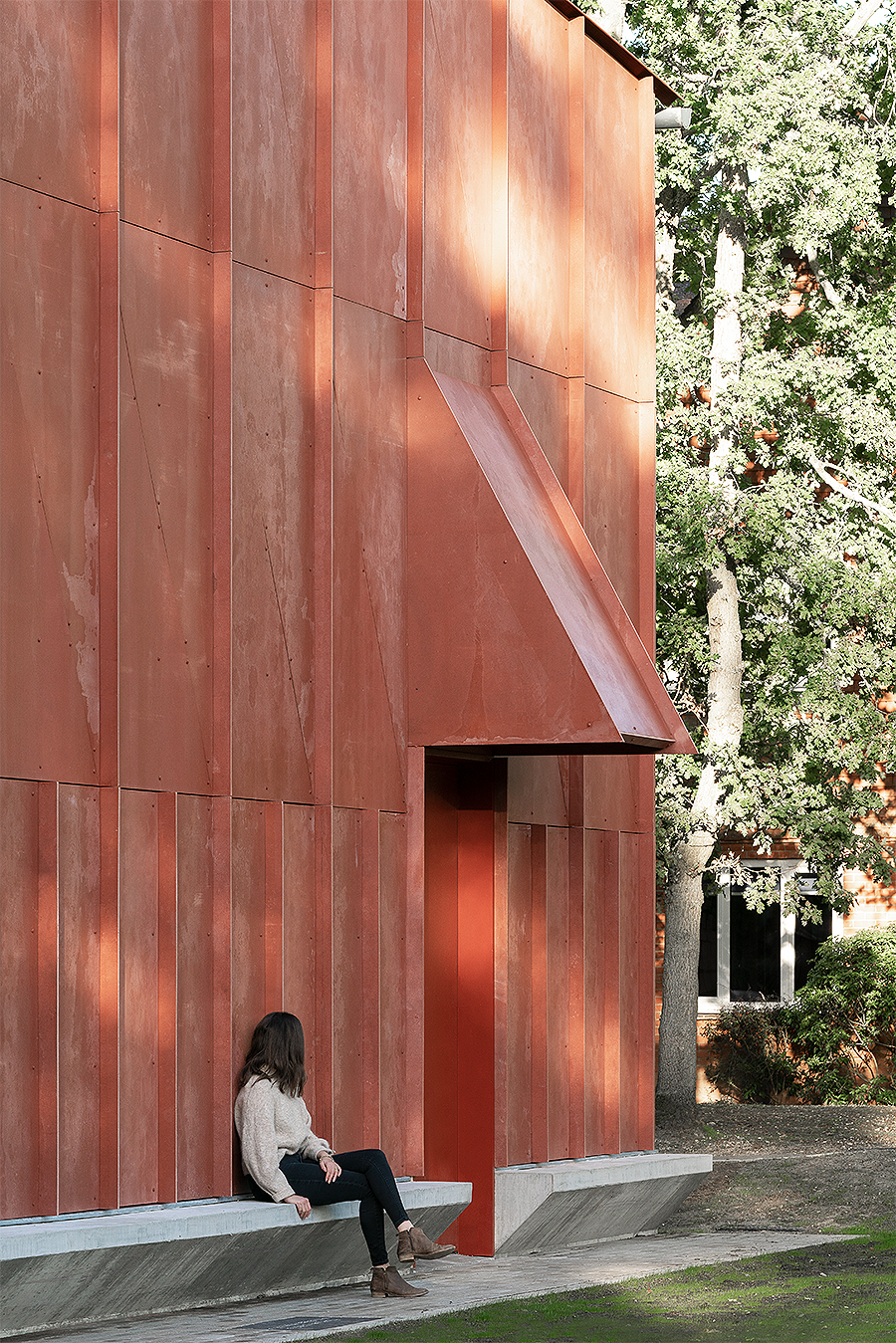 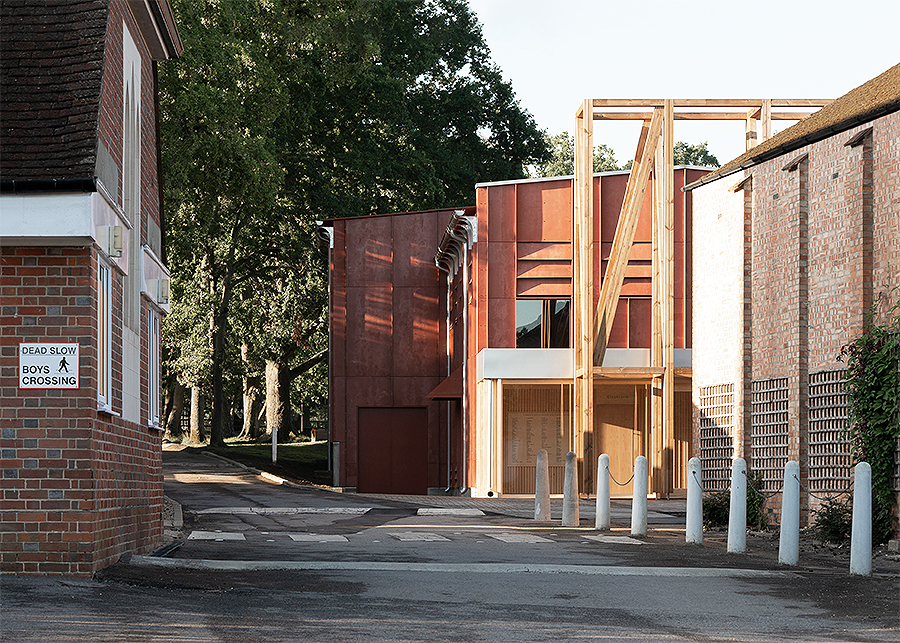 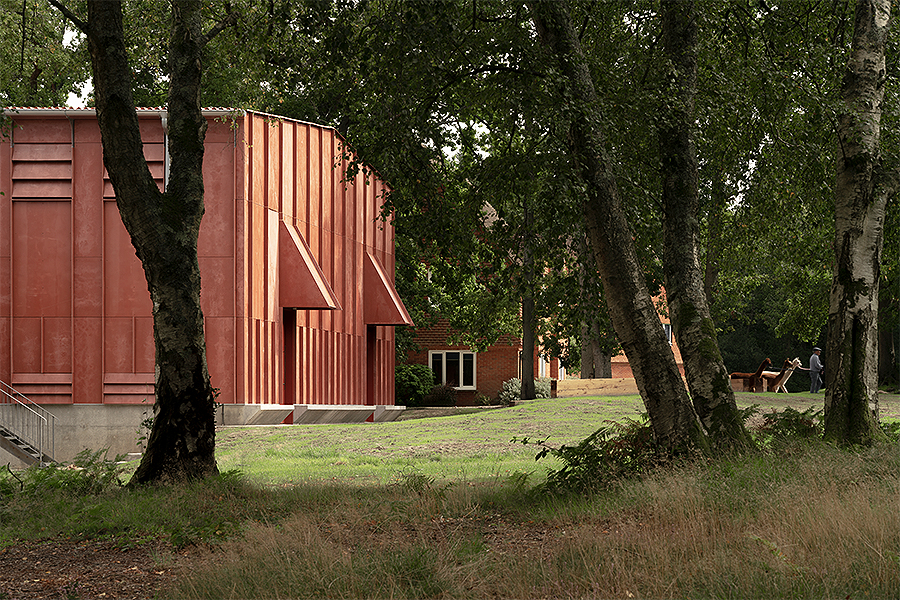 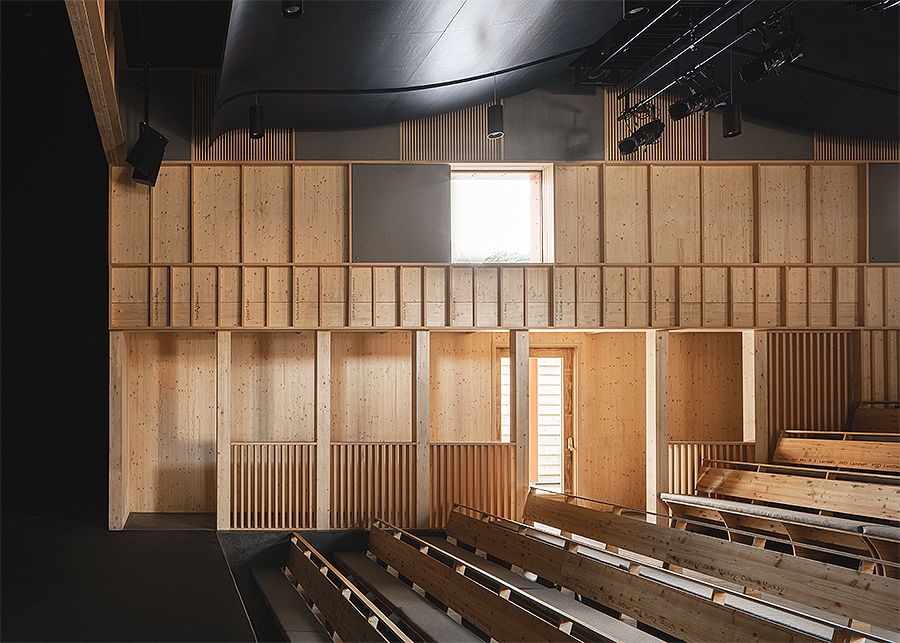 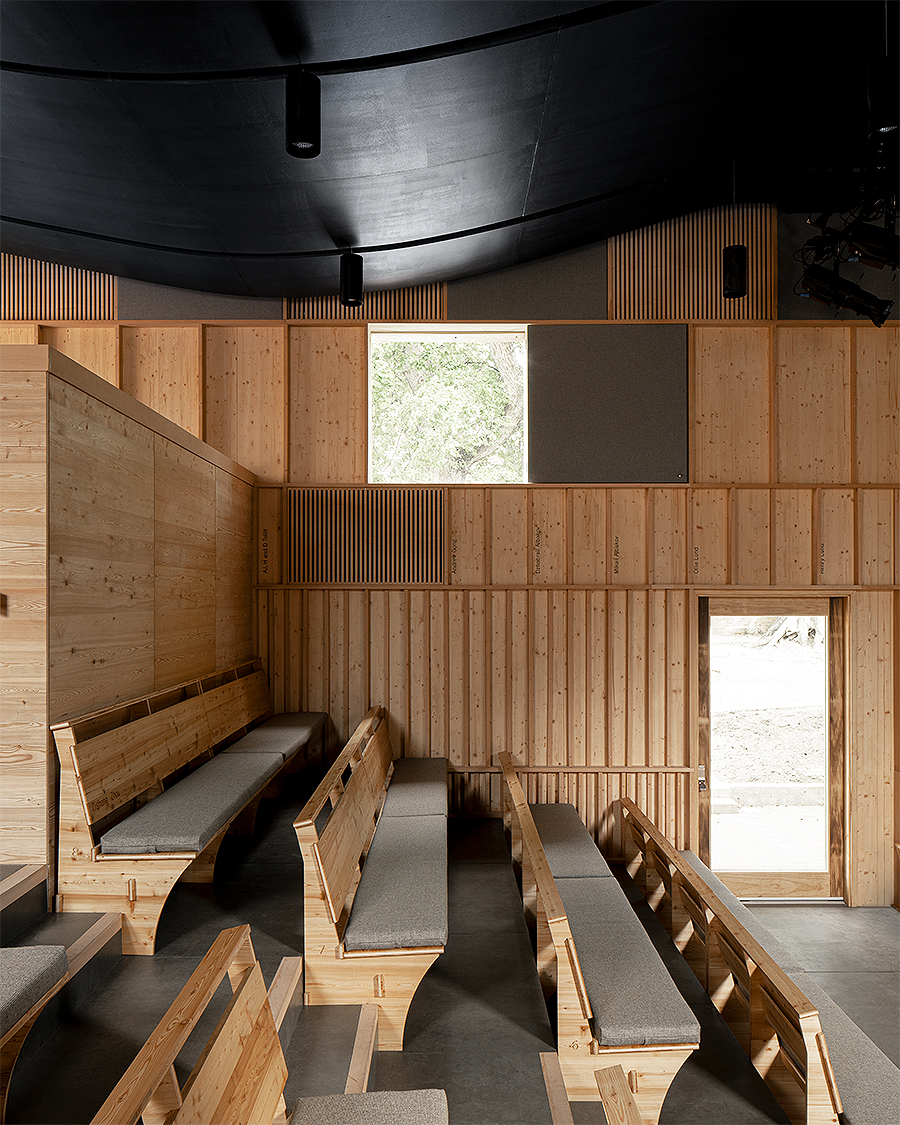 The architect’s design brief was for a theatre that would expand the arts and drama curriculum at Horris Hill School in Berkshire. Located in grounds of 85 acres, the day and boarding preparatory school is for boys aged between 4 and 13.

True to the practice’s commitment to ‘building on the built’, for which it has earned an international reputation, the new theatre plays a vital role in repairing and enhancing the existing campus.

Spanning 528m2 and inspired by Renaissance ecclesiastical architecture, the sustainable building incorporates a 160-seat auditorium, performance space and tall portico structure at the entrance, designed for use as a billboard and assembly space. It is complemented by an outdoor amphitheatre facing the woods and school playing fields. Natural materials were specified to create a naturally-ventilated theatre and to reflect the building’s rural setting.

Vale Southern was appointed as the main contractor for the project, which required the construction of cross-laminated timber (CLT) structure clad with Viroc wood-fibre panelling.

Working collaboratively with the architect and a specialist CLT manufacturer in Austria, Vale Southern helped to finalise the design and logistics plan for the installation of the CLT frame. The large CLT panels were then shipped to the UK and delivered just in time by lorry to Berkshire, ensuring they could be immediately installed by the CLT contractor.

As well as providing a cost-effective solution, the use of CLT reduced construction time on site by around 20%. Using a CLT superstructure also saved 40 tonnes of CO2 compared to traditional blockwork.

The Viroc wood-fibre panelling had never been used for a development of this type or size in the UK before. The product is made using a compressed, dry mixture of pine wood particles and cement to give a natural appearance.

“It was crucial that the Viroc panels were protected from the elements as even a drop of water would stain the product,” explains Ashley Reynolds, Quantity Surveyor at Vale Southern. “This saw our team work closely with the architects and Viroc supplier to develop the most effective preparation and installation techniques, including a cutting schedule.”

Extensive testing was carried out using different coating systems to establish which one would offer the best protection while maintaining the required red hue finish. However, once the coating had been agreed, it was not possible for the panels to be sprayed before they were shipped to the UK as the risk of damaging the protective coating in transit was too high.

To overcome this challenge, Vale Southern built a temporary, weatherproof building on site at the school. This enabled pre-cut panels to be unloaded as soon as they arrived and safely stored. The coating was applied to the panels in the same building to ensure they were protected from the rain.

“Installing the Viroc panels presented many logistical challenges, so required highly effective planning and sequencing,” says Ashley. “The panels were only taken outside when ready to be installed, and the conditions were right – unlike traditional cladding which is painted or stained in situ.”

Inside, the CLT frame was left exposed, which required Vale Southern to design and install an undulating ceiling for acoustic purposes. Working with the architects, the team devised a structure comprising high-grade timber ribs in thick ply. These were arranged in 40 boxed sections, which were then joined together before being suspended from the ceiling. To represent the night sky, this specialist ceiling was painted dark blue.

To absorb sound and prevent echoes, beech battens were installed to line the walls, with grey acoustic panels positioned around the auditorium.

The theatre, which is named after its main benefactor, Lord David Brownlow, founder of the David Brownlow Charitable Foundation, has significantly enhanced the school’s campus and provides 130 pupils with a unique space for school assemblies, music recitals and drama productions. Outside of teaching hours, the new theatre is also available to the wider community through local theatre clubs and groups.

“Carefully crafted to sit in concert with the neighbouring buildings, the theatre draws from its surroundings by being consciously distinct in materiality and structure,” adds Jonathan Tuckey, Director of Jonathan Tuckey Design. “However, the warm red hue of the Viroc panelling roots the theatre among the earthy brick of the neighbouring Victorian buildings and more recent additions.”

The quality of the building’s design has been recognised at several awards. In 2021, it was highly commended at the Wood Awards, was a finalist in the Small Project of the Year category at the Building Awards, named one of the top 10 British architecture projects by Dezeen magazine, and shortlisted at the RICS UK Awards 2022.