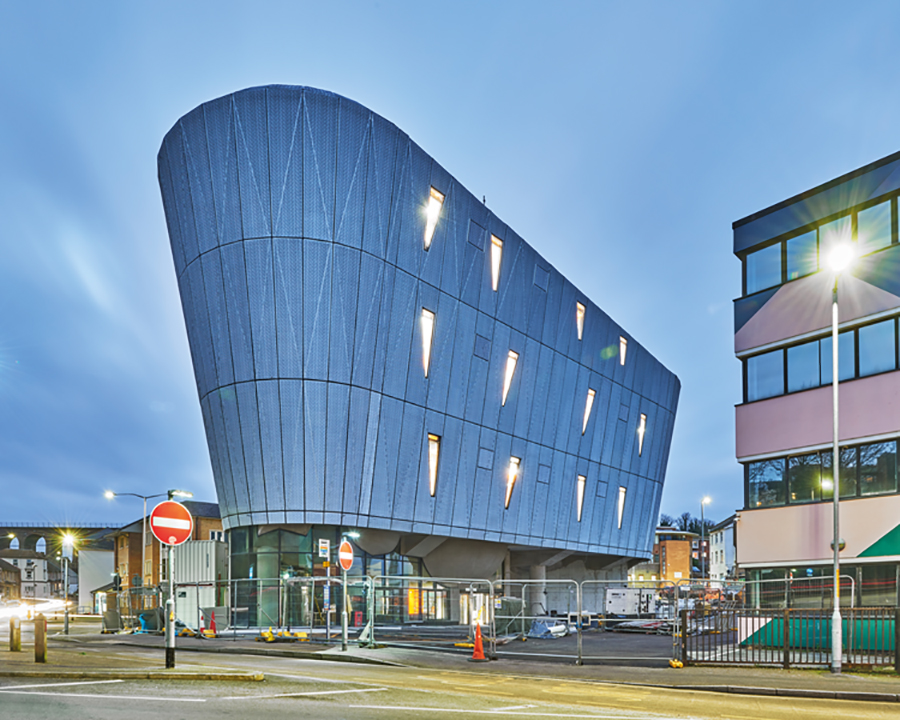 Hollaway Studio has designed the world’s first purpose-built, multi-storey skatepark in Folkestone, UK, as part of a major ongoing programme to regenerate the seaside town. The landmark building features three skateparks, a climbing wall (the tallest in the south east of England) and a boxing ring. It opens to the public this month. 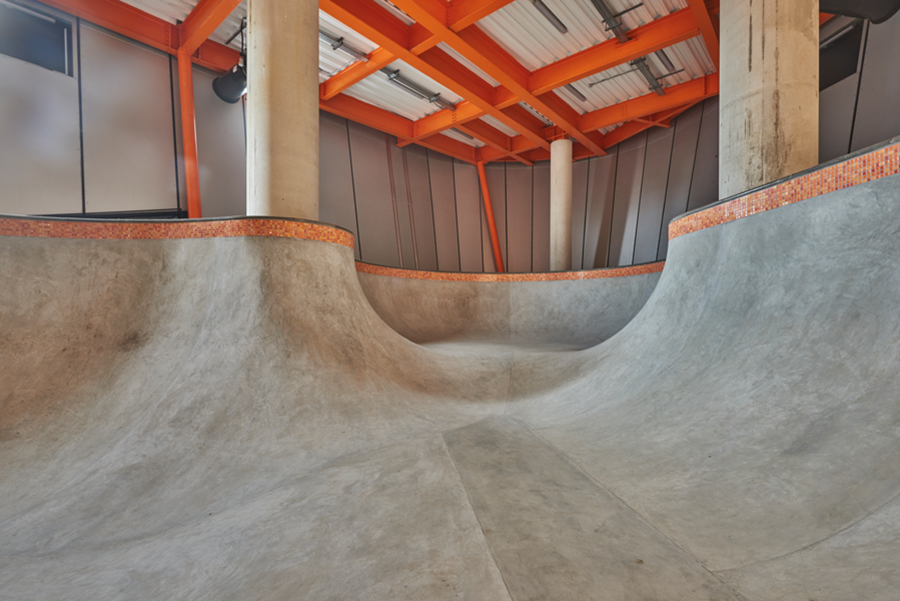 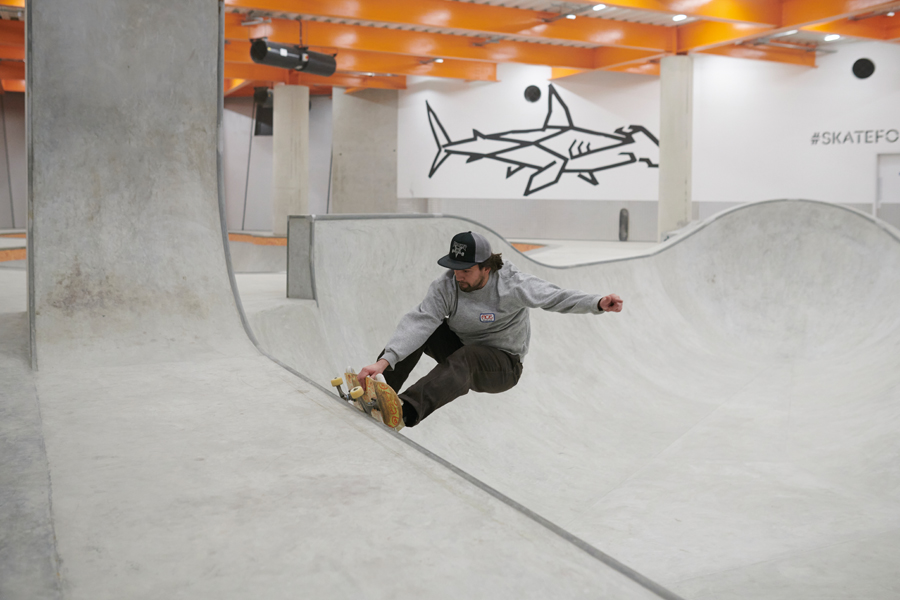 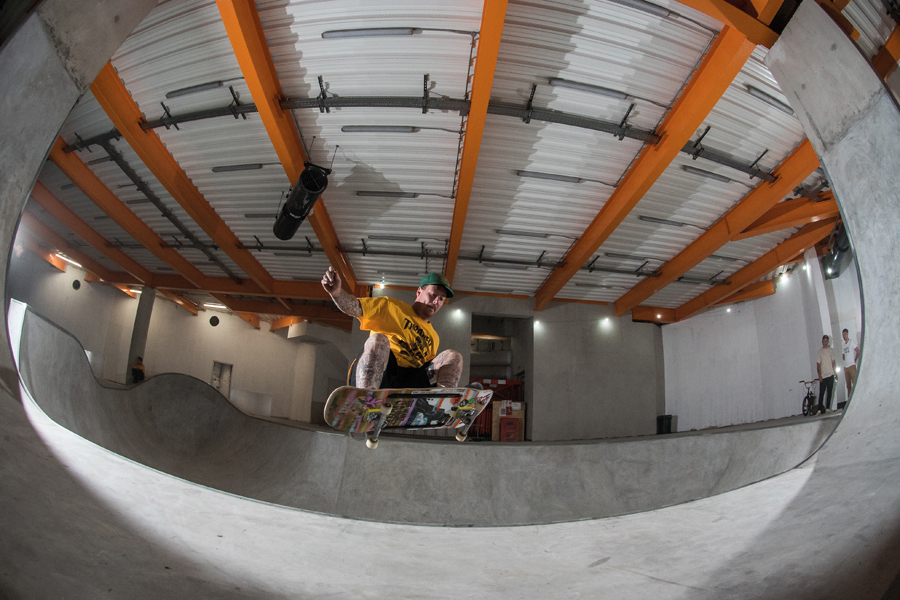 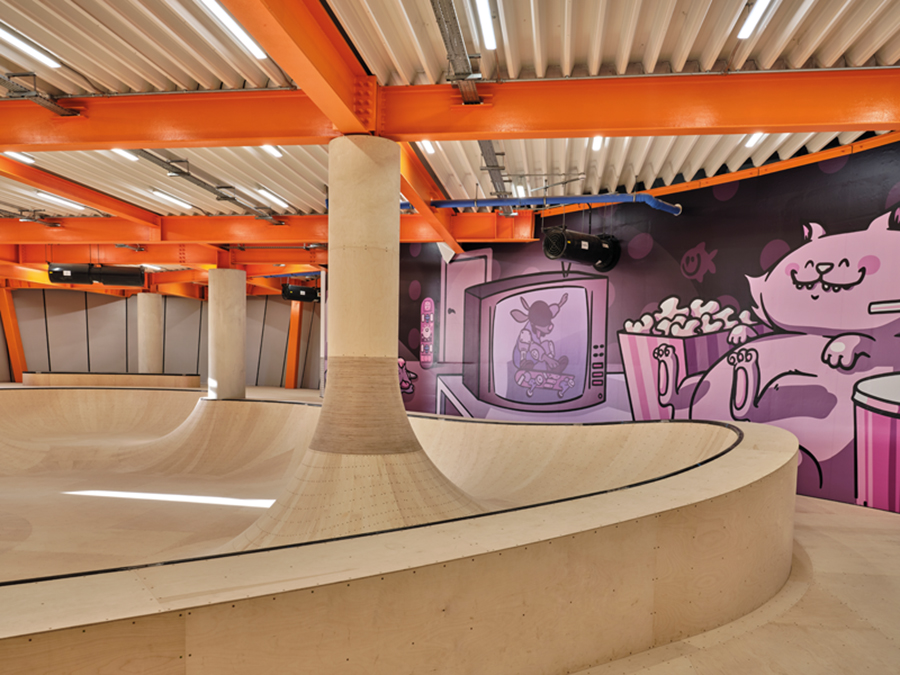 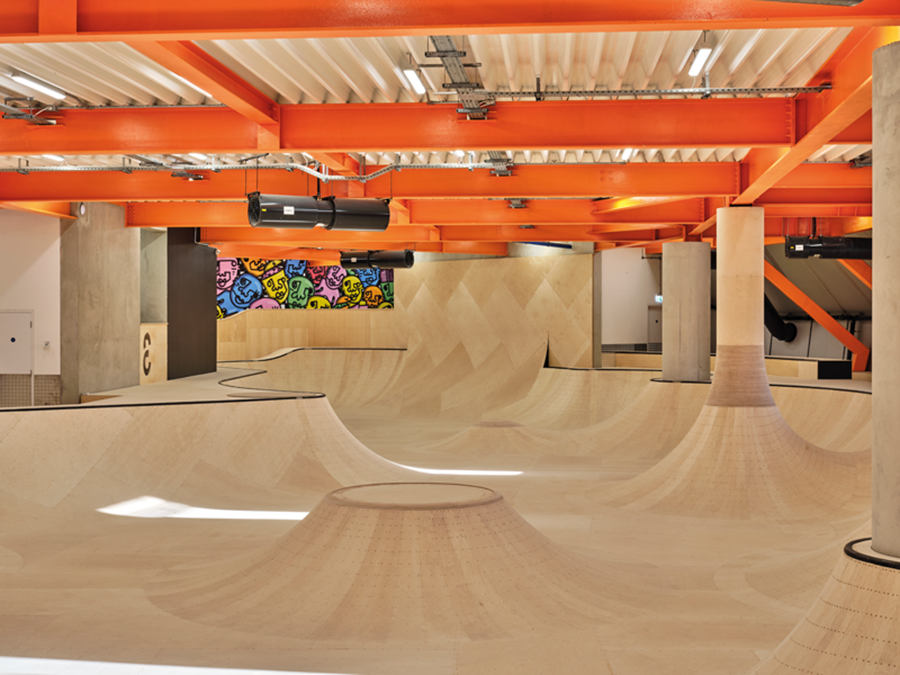 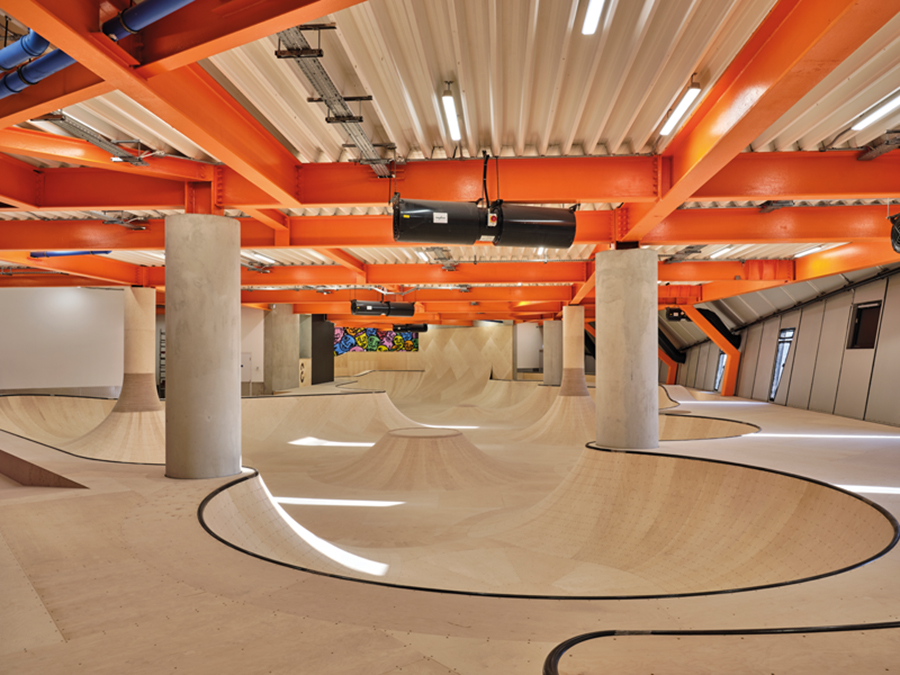 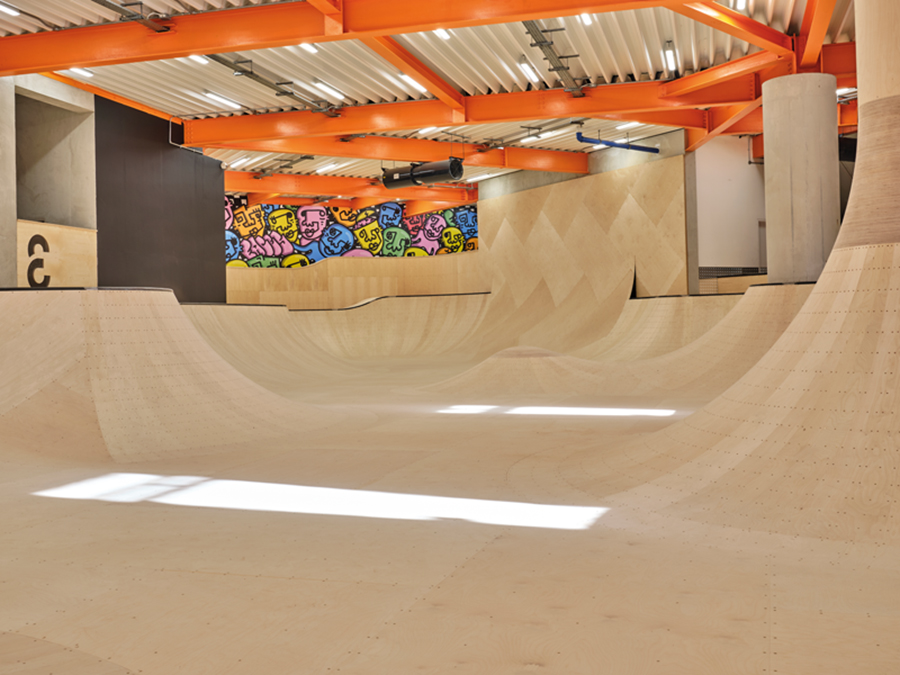 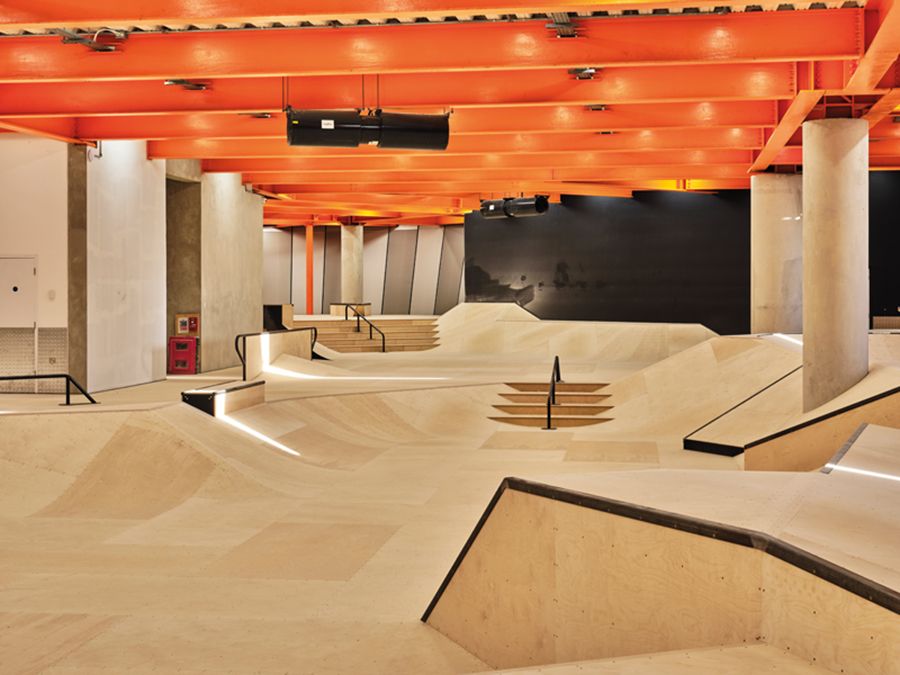 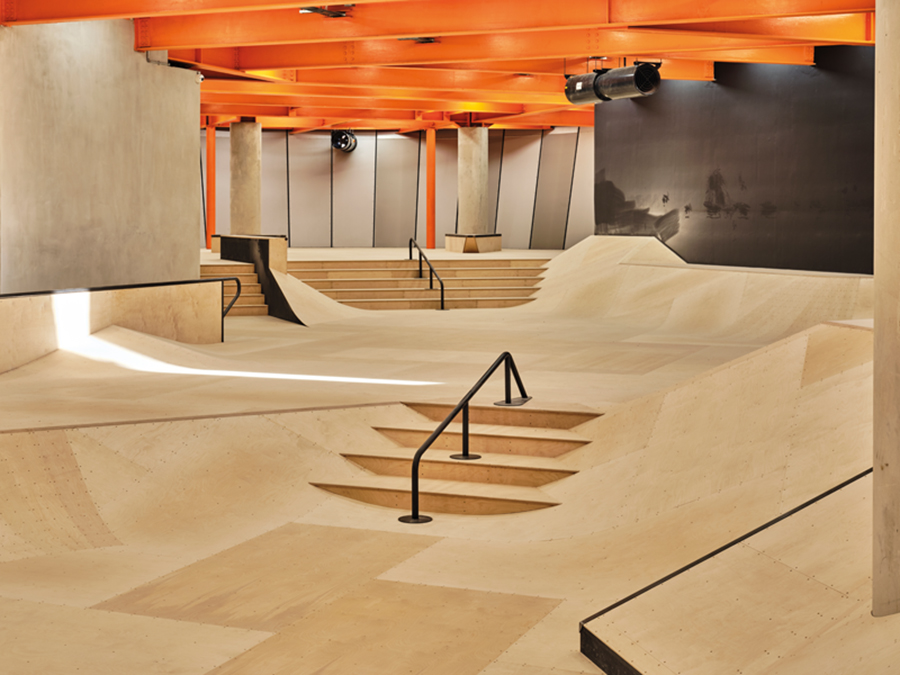 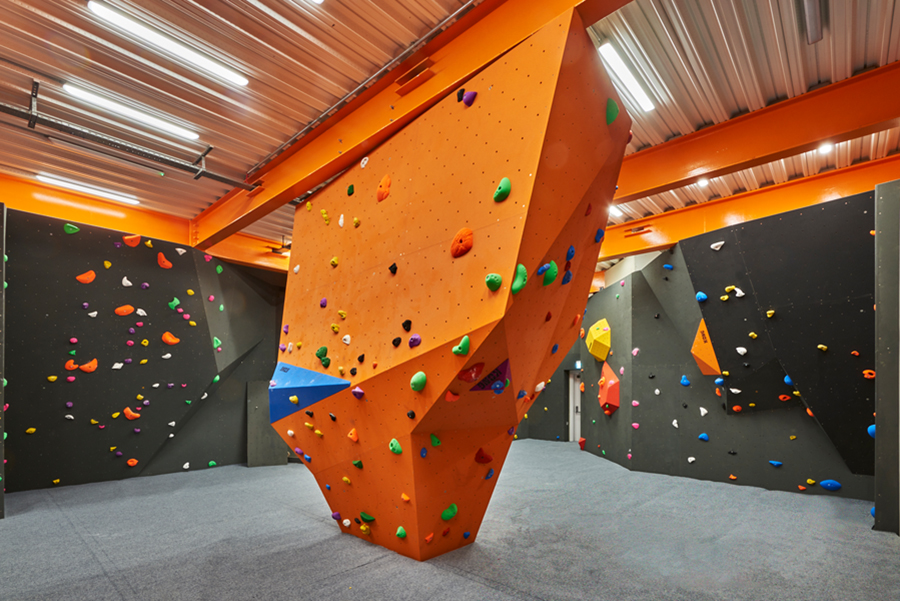 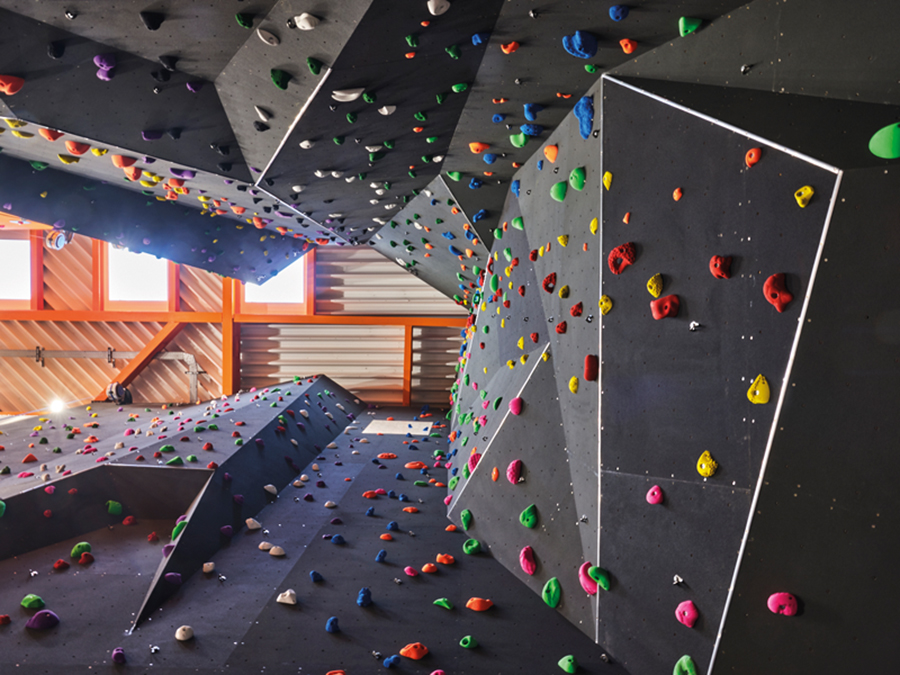 For Hollaway Studio, F51 is an ‘adrenaline building’. From its initial ambition and conception through to the articulation of its form and architecture and ultimately its end-use, F51 is the shot of adrenalin needed by all – from those using it to the local community and the town itself. To create this, Hollaway Studio has designed an imposing concrete beacon shrouded in mesh rising out of the Folkestone Creative Quarter, acting as a focal point within both the local landscape and the community. With its three layers of high-quality skateparks, boxing gym, climbing wall and cafe space, it is a central hub for youth culture following the year that skateboarding was recognised in Tokyo as an Olympic sport and in advance of Paris 2024, just across the channel from it.

F51, named after its location in the heart of Folkestone, a burgeoning seaside town in south-east Kent, has been commissioned by the Roger De Haan Charitable Trust, with Jenner as the main contractor. The trust views the project as a further means to support the local community. It has been responsible for much of the ongoing regeneration that is transforming and reviving Folkestone. F51 is a gift to Folkestone and the young. Located on the edge of one of the most deprived wards in Kent, it will offer young locals freedom and the opportunity to push both physical and mental boundaries within a safe space away from screens. In doing so, F51 aims to put young people first, conveying to the youth of Folkestone that they are important and have opportunities that may not have been immediately apparent before. Membership for young locals who attend schools in the area will be offered at a heavily discounted rate, making F51 accessible for all of the local community. F51 also aims to attract many locals who moved away and are now returning to bring up their own families and continue the regeneration of Folkestone.

F51 is a brave building that has seen the local community and planning authority putting their trust into Hollaway Studio designing a space that could bring together the community and replace the existing skatepark near the harbour. Working closely with renowned skatepark designer Maverick, Hollaway Studio has created three tiers of skate parks suited to all ages and different levels of experience, allowing beginners an opportunity to start at the top and work down to the advanced level, alongside a boxing gym, climbing walls and a welcoming cafe/workspace for the community to use.

Working on a comparatively small contained site, Hollaway Studio has designed a building that grows out of the site, increasing in size as it rises. The vast concrete bowls of the ‘bowl floor’ skate level dominate the experience of F51. Suspended above the ground floor, they appear to hang mid-air, defying gravity and dictating the form of the building, creating an extraordinary sensation to stand beneath them from where you can view the bowls and hear the skateboards above. Using materials that convey F51’s urban setting and use, Hollaway Studio also challenges the very perception of the building and its scale. The curved form means that there is never an endpoint to the building and its near-windowless state removes any reference points to understand its scale. It is inside the building that its immense size becomes clear. On moving through it, the building starts to unravel itself. The different floors are designed to manage and control activities easily, and the lack of flat surfaces gives an unsteadying sensation – geometry playing tricks on the mind.

The three skate areas elevated above ground level of F51 are dedicated to different ability levels, again underlining how the building will be open to all. The first floor is a concrete bowl, where two bowls sit side by side, one inspired by one of the iconic empty swimming pools from Dogtown, Southern California. In 1976-77, a major drought saw swimming pools emptied to conserve water. The local ‘Z-boys’ (Zephyr Competition Team of American skateboarders) recognised how the pool’s architecture could be adapted for their own skateboarding needs and seized the opportunity of using the bowl shape to practice catching air on the deep curves and even taller sides. The images of the skaters using the drained concrete pools have become synonymous with the skateboarding aesthetic. Hollaway Studio continues this by creating an architectural feature out of it. The shape of the underside of the bowl will be clearly visible from the exterior of the building and will be a centre point to the ceiling of the entrance-level cafe space, so it is clear what the building’s foremost use is for throughout.

The second floor is made of plywood timber as a ‘Street’ park combining elements of both bowl parks and street plazas, with obstacles, such as stairs, railings and benches, to perform increasingly elaborate tricks. The third floor, the largest at the top floor of the building, is also constructed from plywood timber and is set up as a ‘Flow’ park with shallow dips. In a well-designed flow park such as this, a skater can move around the park’s curved walls, which includes features such as quarter pipes, pump bumps and bowl corners, without taking their feet off to push.

Linking all three of the floors is the climbing wall, something that has never previously existed in Folkestone and which will be the tallest climbing wall in the south east of England. Like skateboarding, sport climbing was also recognised for the first time at the Tokyo Olympics. The F51 climbing wall is one of only three in the UK that is appropriate for Olympic speedwall training.

Set within Folkestone’s Creative Quarter, on the edge of one of the town’s most deprived wards, F51 will offer membership set at a notional amount of £1 each month. It will serve as a one-stop-shop for the most extraordinary social services. Its mission is to provide Folkstone’s youth with a place of their own and permission to take risks, wonder, have fun and actively achieve results in that most natural state of being: a hugely happy childhood. With the COVID-19 pandemic having so detrimentally impacted on play opportunities, F51 opens at a pivotal time for many of the local youth. The aim will be to invest in this generation, with the objective that it will go on to invest in the one that follows – generational regeneration.