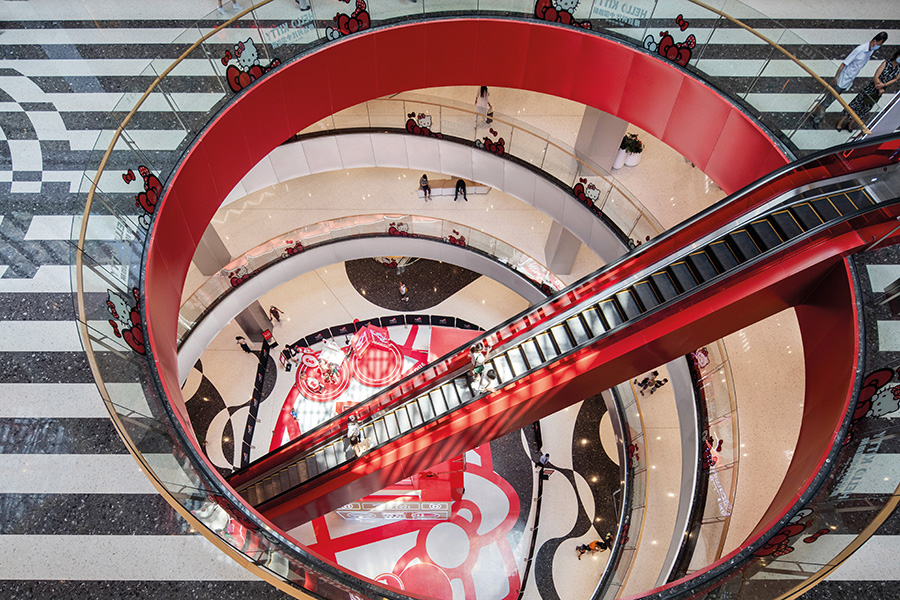 The Bridge, The Source and The Gorge

With the nearby Yangtze as the key inspiration for the building and its inner workings, Paradise Walk Wuhan Jiangchen evolves around river-themed interior spaces that distinctively enrich the retail experience and social encounter in a notion of water and movement. Centrally located in Wuhan’s central business district (CBD) on top of a multi-line transport node, the shopping centre, designed by CLOU Architects, takes on multi-level transport-oriented development (TOD) characteristics, to discharge, channel, host and gather large visitor volumes within its V-shaped footprint. 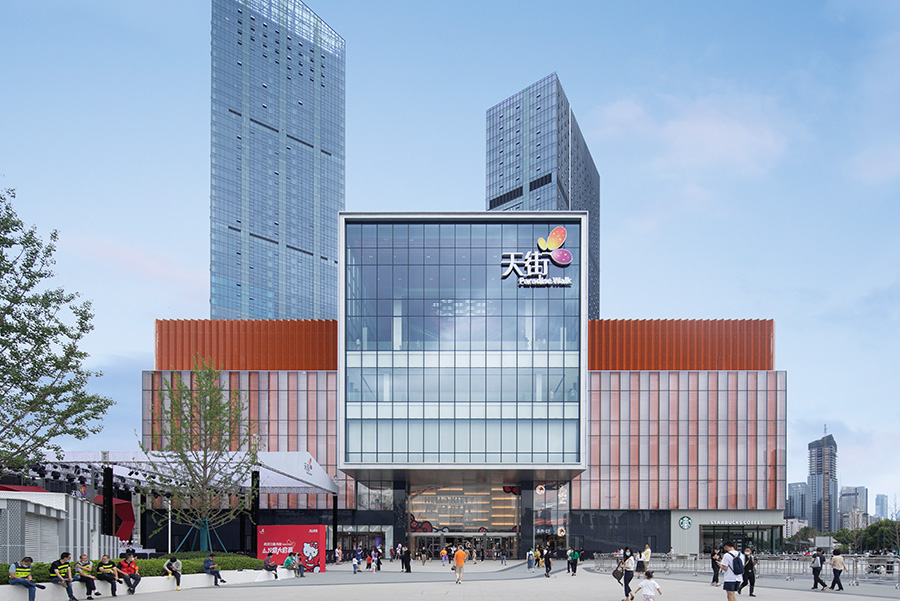 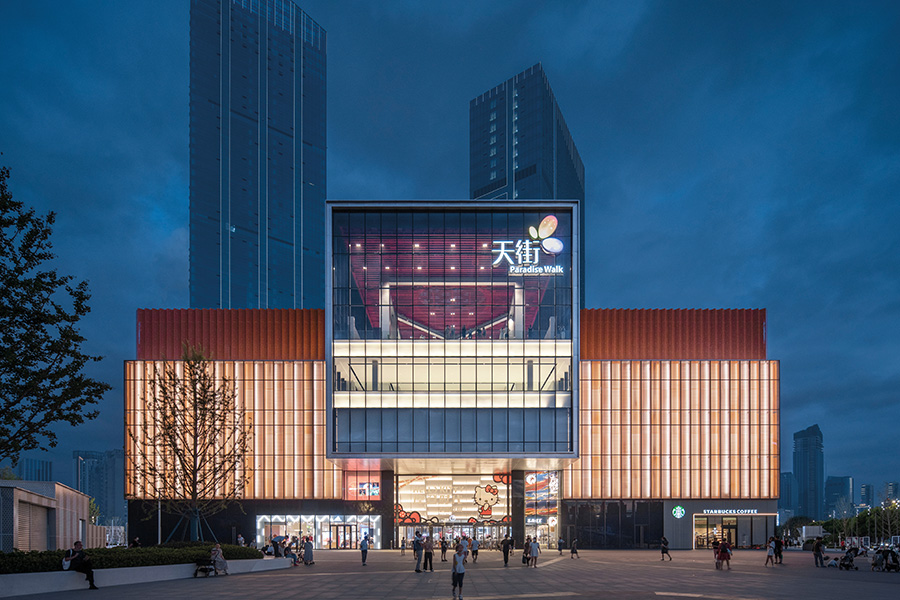 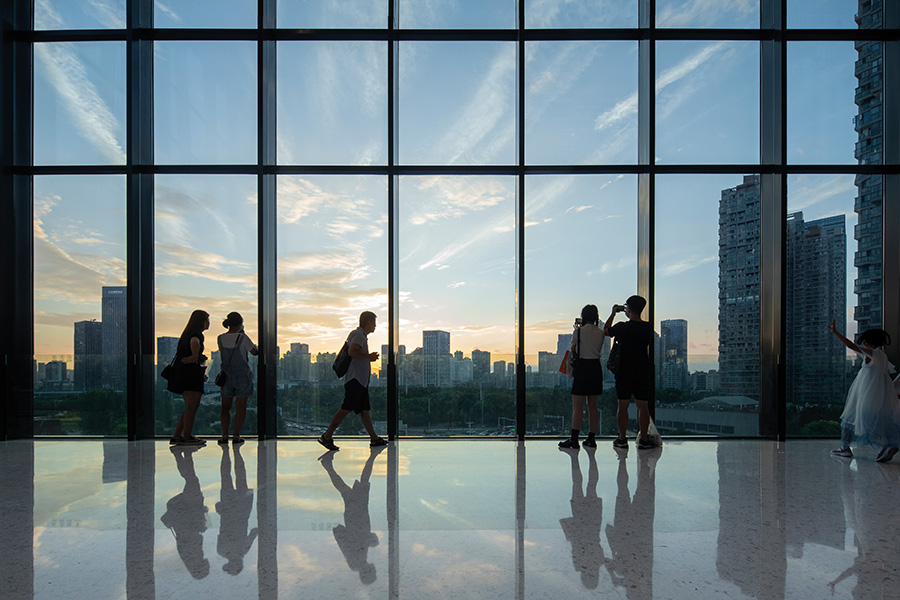 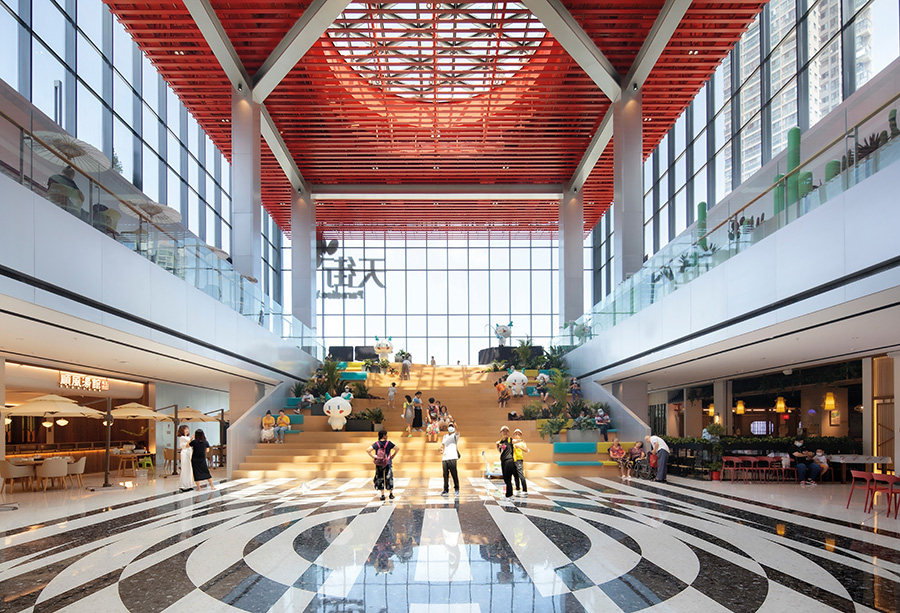 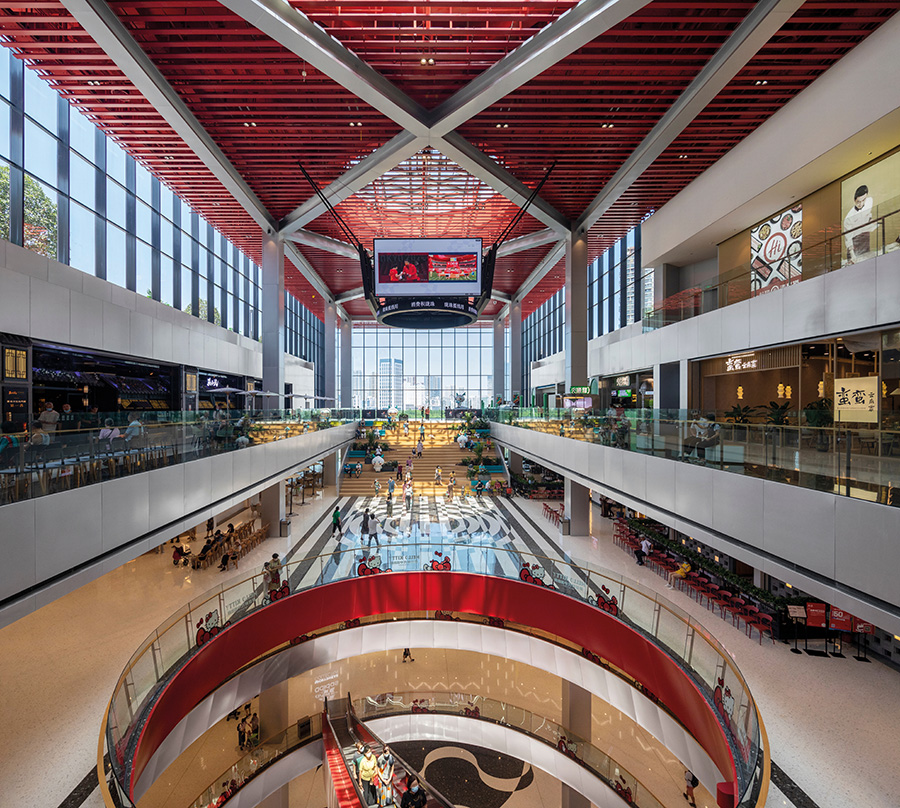 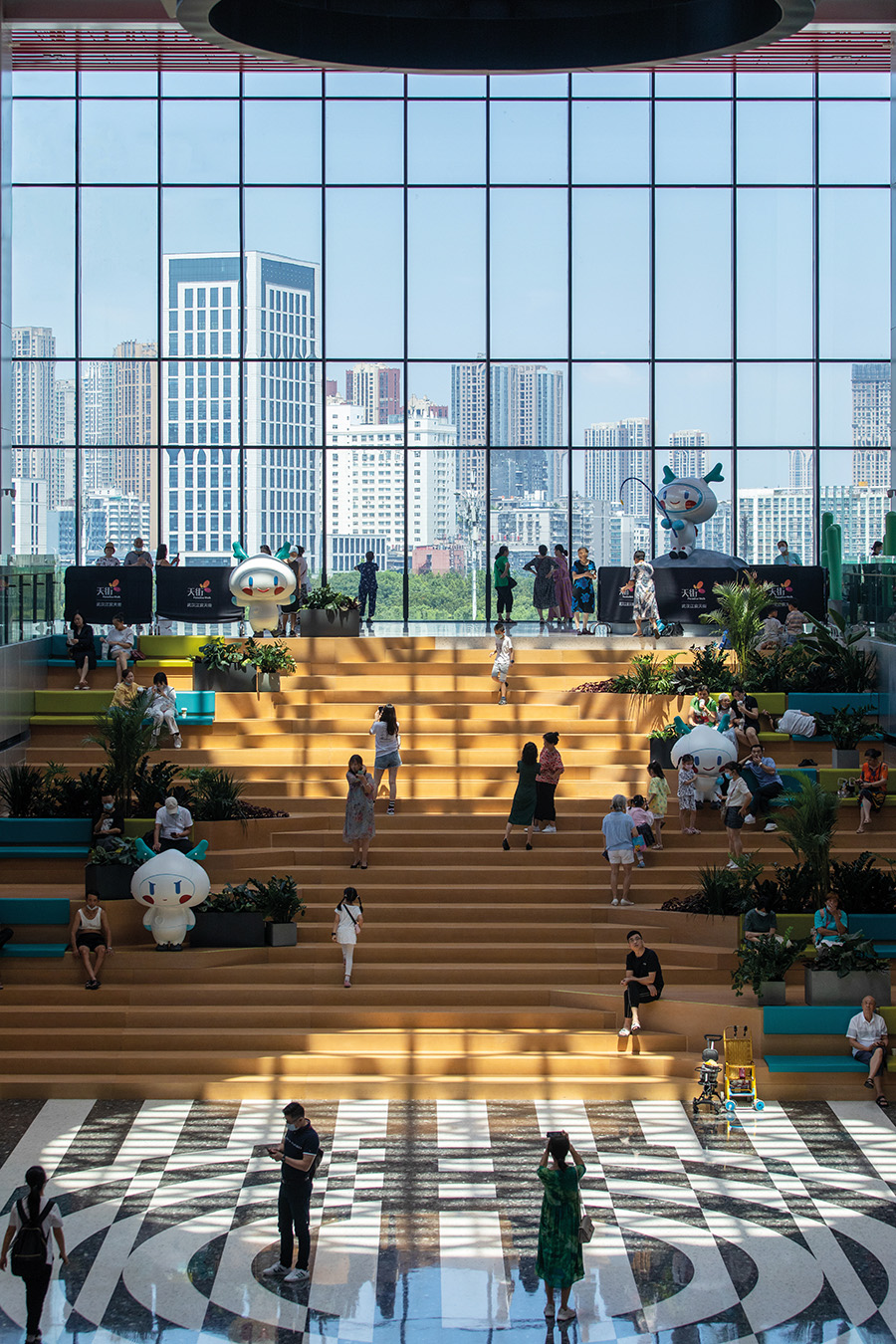 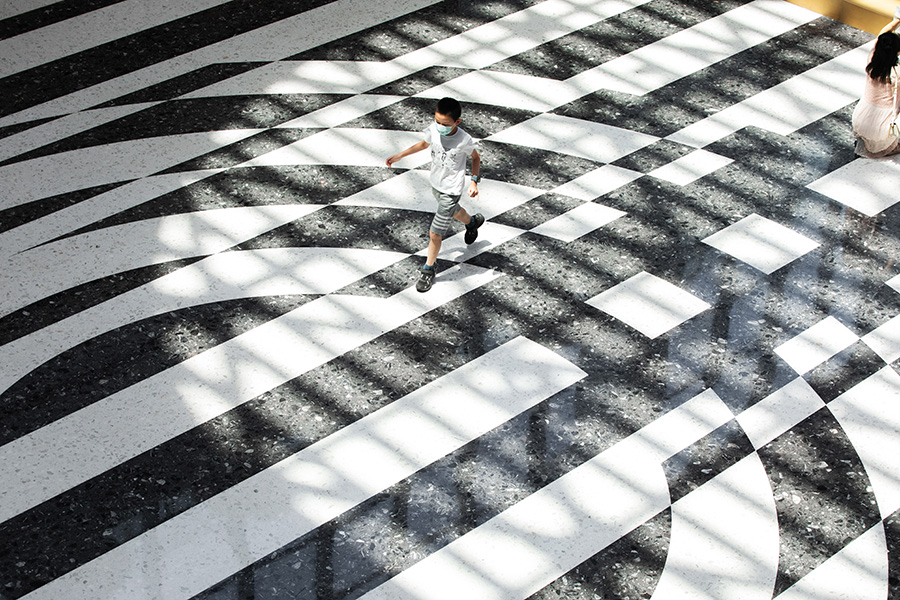 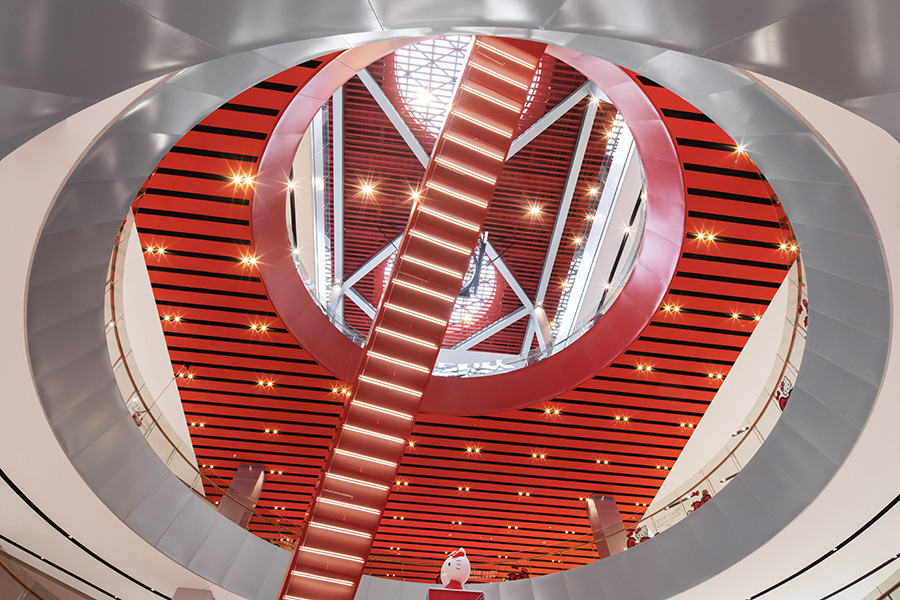 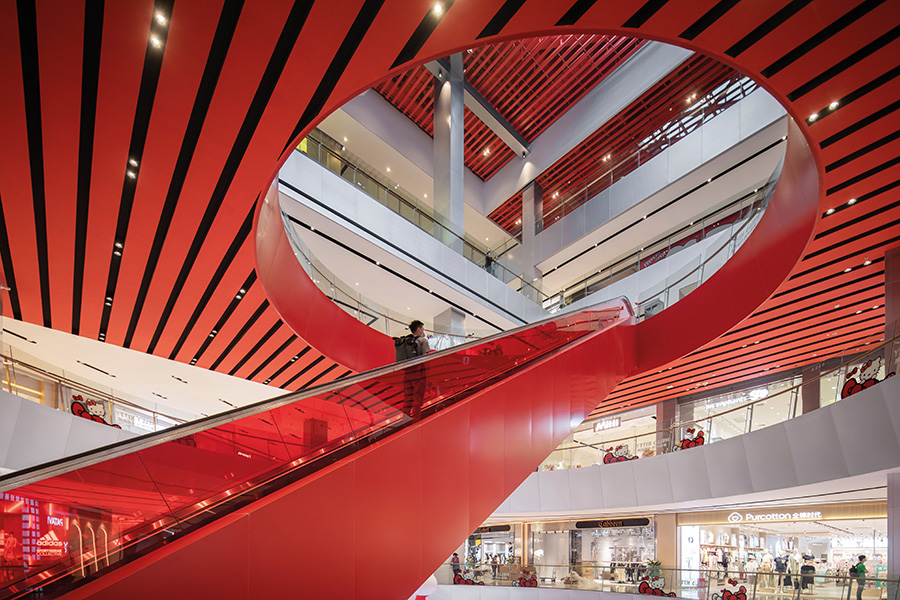 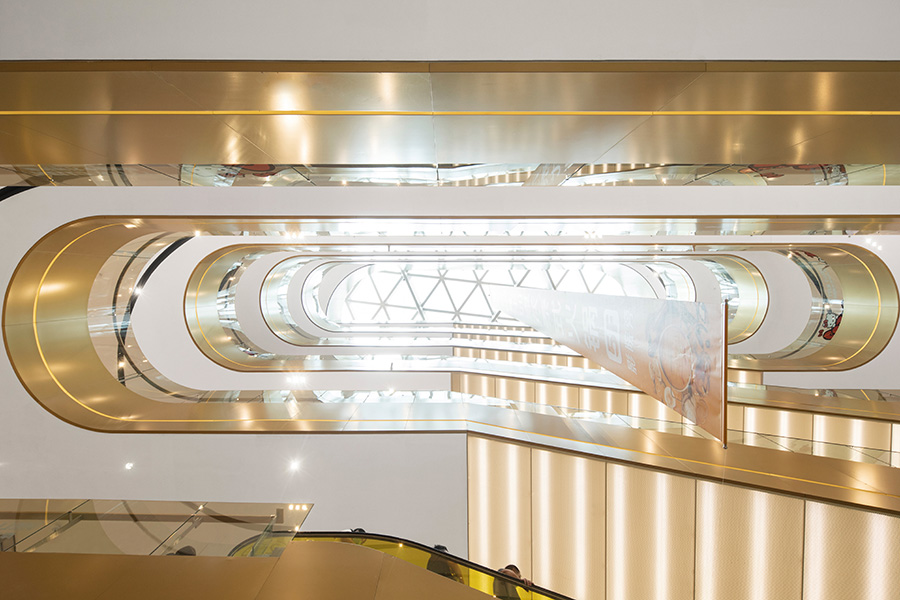 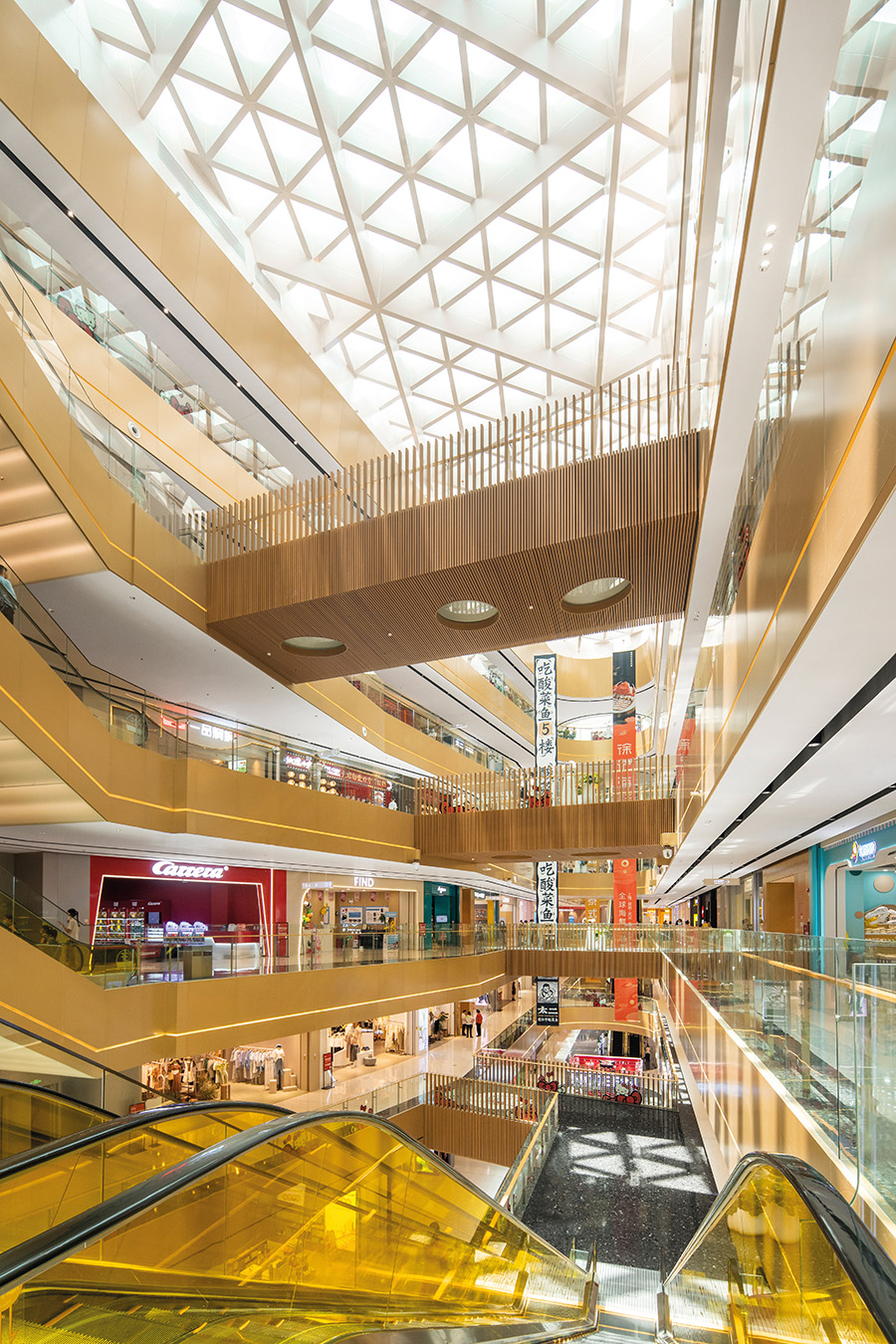 This transit base induces a dichotomy in the functional setup of the retail floors. Its hub character strives to swiftly accept, channel and distribute large passenger volumes vertically into the business zones. The retail aims to attract and retain visitors to dispense them horizontally into its multiform commercial environment.

On a triangular plot topped by two office towers, the 110,000m2 shopping centre’s two wings converge towards the apex of the site, informing the placement of key spaces, their hierarchical order and distinct shape.

‘The Source’ stands as the origin of water as it emerges from the ground. The spherical multi-storey atrium symbolises concentrated power in concentric monochrome patterns that energetically direct movement. The dense ceiling orbits are mirrored in the black and white circles of the floor to anchor the space at its base. Mirror accents in the vertical circulation create bright visual effects, with escalators appearing to cascade as they transport people from one level to another. Connecting to the metro hub, The Source is the discharge point of all activities into the development.

In the opposite wing, ‘The Gorge’ creates a very different atmosphere. Like a deep ravine, a narrow, elongated atrium extends across several storeys, offering select skyward views. Levels differ in strata, bending to provide a distinct spatial experience with every turn, in an ascending move towards the large skylight. Narrow wood-clad bridges crisscross the void, introducing a natural character that is taken up by the warm tones of the vertical surfaces.

‘The Bridge’, the connecting element between the two wings, acts as a spatial and metaphorical hinge; a central zone for encounter and celebration, a communal gathering point and a vertical and horizontal distributor. Red feature escalators cross a cylindrical void on multiple levels, moving visitors vertically through this pivot point. From here, a linear event space stretches out to culminate in full-width landscaped stairs that lead up to a panoramic window; an elongated cantilever that prominently reaches out into the surrounding cityscape. The bridge narrative continues in the industrial feel of the bright red exposed ceiling structure.

The interior key zones and their dynamics are reproduced in an approach towards the exterior facade design. The V-shaped massing is bisected by the focal glass protrusion of The Bridge, with the adjacent volumes receding in terraces, a gesture to the park across the intersection. Key functions, such as a cinema and sports zone, are volumetrically expressed in protruding cuboid volumes that mark the building corners, entrance zones and programmatic highlights. In addition, the corners set out the colour identities of their respective adjacent facades, with each side of the triangular footprint represented in an individual colour scheme of gold, red and blue. The strong hues diffuse in a dynamically-pleated facade that adds three-dimensional depth and a clever two-fold colour play, allowing for different aspects from every angle viewed.

Perforated metal screens feature diverse intensities in corrugation for further articulation and visual layering along the extended sides. This introduces lightness and differentiation to the stacked volumetric, effectively breaking down building mass.

Advertisement panels and oversized ‘shop windows’ create rhythm and animation, their scale reacting to the respective viewing distance they respond to the urban level, the speed of passing by, and the human scale that eventually attracts and draws individuals into the shopping centre. This multitude of spatial experiences that CLOU Architects has designed helps to create an environment that encourages visitors to return and explore Paradise Walk Wuhan Jiangchen time and time again.