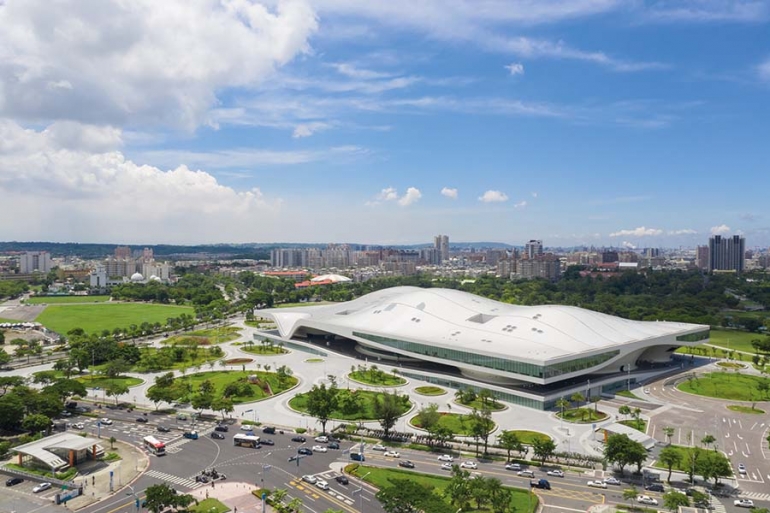 Designed by Mecanoo, The National Kaohsiung Centre for the Arts symbolises the transformation of Kaohsiung, Taiwan. What was once a major international harbour is now a modern, diverse city with a rich cultural climate. The design is located on a former military site, as an integral part of the adjacent subtropical park and has a positive social impact on the residents of Kaohsiung, whose population counts almost three million.

The open, protective shape of the local banyan tree becomes a springboard for The National Kaohsiung Centre for the Arts’ design. The trees’ iconic, wide crowns provide shelter against sun and rain and are a perfect expression of Kaohsiung’s humid atmosphere. In the city, the building’s expansive sheltered crown becomes the Banyan Plaza, a generous, sheltered, partially-enclosed public space. Designed with the subtropical climate in mind, the open structure allows the cooling wind to blow freely through.

Between the four formal performance halls, which form the ‘trunks’ that support the undulating roof, a topography rising from ground level to 5m+ becomes part of the park’s landscape. Residents can wander here day and night, practise Tai Chi or stage street performances along walkways and informal spaces. An open-air theatre nestles on the roof where the structure curves to the ground, with the surrounding park forming the stage. The seamless flow between interior and exterior creates opportunities for crossovers between formal and informal performances. The vast, undulating structure is composed of a skin and roof and connects an extensive range of functions. The curved steel structure was built in cooperation between a local and a Dutch shipbuilder. The centre’s iconic canopy – a billowing plane of architectural fabric akin to a tectonic plate – forms the conceptual foundation of the project. This undulating roof is a marvel of structural engineering, with one side scooped out to form a beautifully-landscaped amphitheatre for a plethora of outdoor performances.

Seven hectares of green space, balanced between hard and soft landscaping, accommodate event spaces and logistical access while creating a gradient of nature towards the neighbouring Weiwuying Park.

Moving inside, curving walls expand and contract like the branches of a banyan tree, generating organic spaces for playing, making, viewing art and taking in performances. The scale of the project is virtually unprecedented, yet the character of each space remains welcoming and accessible to its inhabitants.

Different theatres such as the 1981-seat concert hall and 2236-seat opera house are located in the five cores (or ‘legs’, as they’re also known) of the building where the structure meets the ground. The cores connect with one another via foyers in the roof and an underground service floor which houses the backstage area of each theatre.

The concert hall is shaped like a stepped vineyard with a stage at its centre and terraces at different floor heights encircling the podium. With seating on all sides of the stage, the audience is in close proximity to the performance itself.

The opera house is arranged in the form of a horseshoe with three circled balconies. This theatre is suitable for Western opera, with an orchestra of over 70 musicians. The seating is upholstered in a mixture of red and purple fabrics with a pattern of Taiwanese flowers, contrasting with the darker walls.

The 434-seat recital hall has the most intimate atmosphere of the four. With its asymmetrical composition and seating across two levels, it is designed for chamber music and recital performances. The seats in the recital hall have the same golden fabric as the concert hall, and oak lines the walls. The upper part of this hall is enclosed by a circle of sound-absorbing curtains, allowing for the reverberation time within the space to be tuned to specific types of performance.