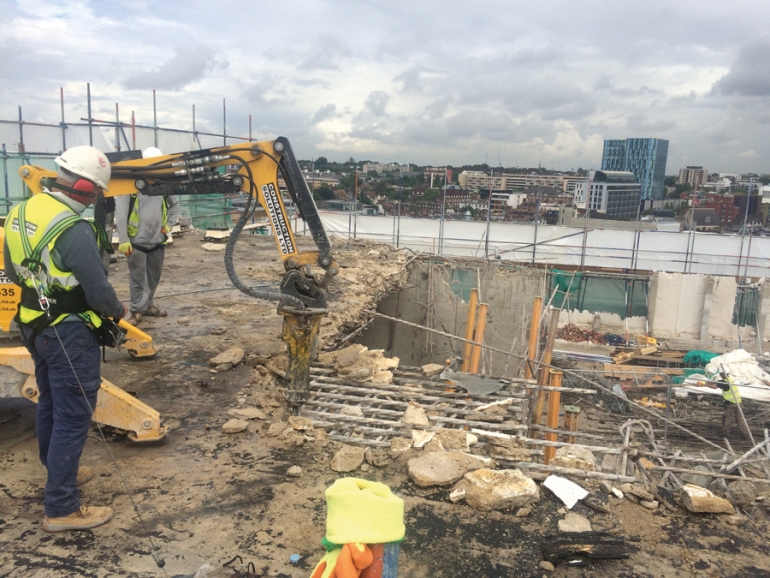 Camden Town Hall Annexe, a 1970s concrete-framed extension to the main town hall building, is currently being transformed by McLaren Construction from an eight-storey council office block into an 11-storey, 270-room boutique hotel for developer Crosstree.

The project has involved complex temporary works and structural remodelling, delivered by Construction Solutions as a specialist sub-contractor to McLaren. The structural works programme included strengthening the building to enable the addition of three storeys, removal of two cores, creation of a new goods lift shaft and provision of a curved ‘scenic lift’ on the external Euston Road elevation, maximising views of St Pancras Station, located opposite the scheme.

Not only has the programme required meticulous sequencing of temporary works, demolition and structural alterations, it has also been carried out on a confined Central London site while the adjoining Camden Town Hall building has remained fully occupied and in public use throughout.

One of the first elements of the structural and temporary works package was to create the infrastructure for the tower crane, which has been required as a programme-critical piece of infrastructure to overcome the lack of space or oversailing ability at the site.

The Construction Solutions team dug a pit in the basement down to the level of the piles that had already been completed by the piling works contractor. Steel rebar was then installed, and the yellow crane posts were lowered into position before being anchored in place by the concrete pour. The tower crane was then lifted into the building in sections and assembled in-situ. The Construction Solutions team will return to site to break the supports out of the concrete when it is no longer required on site, demolishing the temporary crane foundations and reinstating the slab.

Construction Solutions worked closely with the project’s structural engineer, HTS, throughout the programme design and delivery to ensure that the works on site accurately reflected the loading calculations and demolition tolerances for the building. HTS designed the temporary works and, utilising these designs; Construction Solutions carried out a thorough survey of the building, including ferro scanning of each slab to ascertain the exact location of every piece of rebar. The amount of steel rebar that can be removed as part of the structural alterations has been precisely calculated as part of the engineering process, and Construction Solutions had to make certain that cutting equipment did not damage or destroy structurally-critical existing reinforcement.

The first of the temporary works to be erected was the steel supports for the goods lift core, which rises from sub-basement level to the underside of level eight. Custom-fabricated temporary steelwork was installed to support the structure so that large areas of the slabs could be removed. Once the temporary steelwork was in place, voids could be created for permanent steel columns, which are precisely positioned in 10 locations around the internal perimeter of the existing structure, rising from the transfer slab on the first floor up to the full height of the existing building. These columns will increase the load-bearing capacity of the existing structure to enable the addition of three new storeys.

Once the steel columns were in place, additional rebar was added, and the slab was cast back around the columns to reinstate the slab.

With the columns and the temporary steelwork in place, Construction Solutions was able to excavate the new core for the goods lift. Once again, this had to be carried out with minimal removal of the existing rebar and there was zero tolerance for any damage to the reinforcement within the 1200mm first-floor transfer beam, which is critical to the structural integrity of the whole building.

The area where the 1970s building narrows to connect with the older section of Camden Town Hall, which will be retained as a civic building, is known by the project team as the ‘neck’ of the building and it is here that the two redundant cores were removed.

In order to take out the two cores without jeopardising the structural integrity of the building, a void was created for a shear wall within the existing structure, positioned adjacent to the neck of the building. Rising from sub-basement level to the underside of level four, the shear wall will ensure the core stability of the building and has been formed as a substantial reinforced concrete structure, requiring stitch drilling of the first-floor transfer beam without drilling into any of the existing rebar.

The loading requirements for the additional storeys were such that both the new lift core and the shear wall had to be completed and cured to full tensile strength before the erection of the steelwork could begin on the new storeys. Following close collaboration with the concrete supplier, Construction Solutions changed the specification to a suitable self-compacting concrete that would allow monolithic construction of the strengthening slabs while offering the required tensile strength.

Preparation for construction of the new level 9-11 extension also involved demolition works to the original 700m² plant room. To overcome the need for traditional decking methods, a detailed overlapping plate system was introduced with back-propping to allow demolition of the structure.

A Brokk remote-control demolition robot was used to enable the site team to stand back from the work area to operate the equipment via a unit attached to their torso and connected to the robot. This equipment is part of Construction Solutions’ in-house fleet of plant and machinery and was critical on this project to provide a safer and faster solution.

Once the rooftop demolition had been completed, a new slab could be cast to enable the construction of the additional storeys. Once again, the speed and efficiency of the Construction Solutions team in installing the steel reinforcement and casting the new slab was programme-critical, as construction of the additional storeys could not begin until these works had been completed and the concrete had cured to full tensile strength.

Throughout the complex programme, the McLaren and Construction Solutions teams have taken a proactive, problem-solving approach to managing the challenges of the scheme which is scheduled for completion later this year.