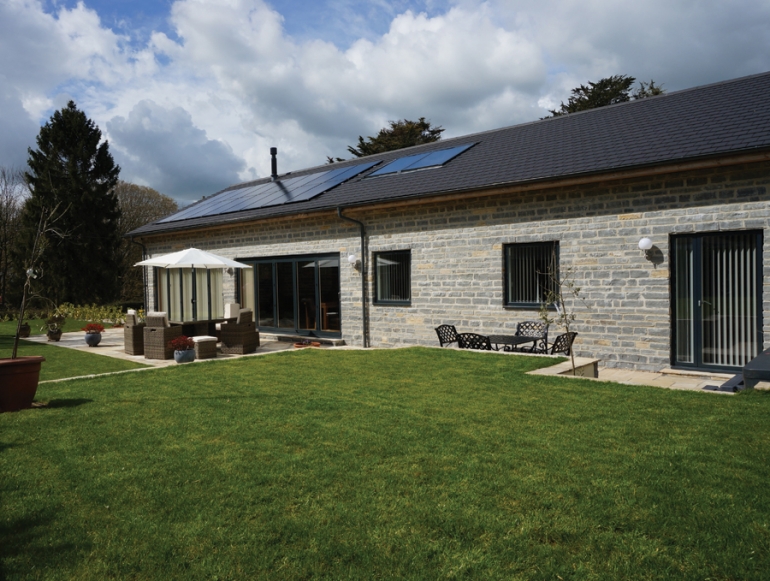 O2i Design Consultants was asked to design two detached eco homes that would enable siblings Gill and Richard, along with their spouses Frank and Angela, to live side by side on a plot of land from the family farm they had grown up on.

While the rest of the farm had been sold back in 1975, the brother and sister had retained half an acre in the hope of getting planning permission to build on it, but had tried several times without success. On approaching retirement, they decided to try for planning permission one last time and were advised that in order to give them the best opportunity, they should get an architect to prepare a detailed set of drawings and engage a planning consultant.

They approached Duncan Pyle from O2i Design, who they knew had experience in sustainable construction and knowledge of renewable energy systems, both of which would be important for this development. Duncan’s previous experience included designing the plans for the first commercial eco development to reach Code for Sustainable Homes Level 5, which was later used as an exemplar case study by DCLG (Department for Communities and Local Government).

The family appointed O2i Design, which worked closely with them, the builder and the chosen planning consultant, Clive Miller & Associates, throughout the process. Although the plot already had houses on either side, it was considered to be outside the development zone so they needed to demonstrate that the site was sustainable and that the impact on the neighbours would be minimal, as well as ensuring that the homes met the clients’ requirements. Thanks to his knowledge of planning and environmental aspects, Duncan was able to advise on and develop plans that would give the properties the best possible chance of being approved.

After a long process, the family succeeded in gaining planning permission and the detailed design of the houses began. The aim was to have two bespoke-designed, energy-efficient homes with extremely low running costs, enabling the owners to reduce their outgoings during retirement. The orientation of the houses was crucial and 3D models were produced to explore solar gain and shading from potential overheating.

The families were very much involved in the design process and, while both houses are virtually identical on the outside, each has a slightly different layout inside to fit their individual requirements and preferences.

“Duncan drew up a set of plans and although the basic design stayed the same, we had the opportunity to work with him to tweak the layouts in a variety of ways to make sure they fully suited our needs,” explains Frank. “With his help, and that of our builder, it was nice to be able to pick out what we wanted and make the two homes a little bit different.”

Energy generation and efficiency are integral to both properties, and O2i Design’s knowledge of sustainable construction has been a defining feature throughout the project, from the planning application process to the final design and materials used. Solar thermal panels and PV cells were integrated into the roofs, whilst ground source heat pumps on 60m deep bore holes, backed up with wood burners, allow the houses to run entirely on renewable energy. In addition, the owners are able to sell generated electricity that they are not using back to the grid.

Frank says: “The houses are a little bit different and were built with all the eco-friendly aspects in mind. For example, most of the other houses in this area are facing the road, but Duncan’s design was to have them south-facing to get the maximum benefit from the sun, providing natural light and heat.”

Richard adds: “Duncan was knowledgeable on eco matters and very much up with all the latest developments, so we accepted plenty of good advice from him on all sorts of areas.”

Very high levels of insulation and high specification glazing were early decisions in order to retain the small amount of energy required to heat the houses. The U-values of the walls are 0.16 W/m2K and the roofs are 0.11 W/m2K.

Richard comments: “The insulation is excellent. In October, in an open-plan space without any heating on, it’s 27ºC – it’s beautifully warm.”

Frank agrees, saying: “There is so much insulation within the walls and roof that the heat just doesn’t escape. Then we have ground source heating and photovoltaics for the electricity, which we also get payback on through the RHI and feed-in tariff, so that all helps to keep the running costs down.”

After taking into account the feed-in tariffs from the on-site micro generation, the total energy cost per house according to the SAP (Standard Assessment Procedure) calculations is estimated to be around £262 per year.

Richard says that the houses have generated a great deal of local interest by their interesting and attractive appearance. “People are often stopping to have a look at the properties and we’ve even had people wandering in, asking if they can have a look around. Duncan’s architecture work has really paid off – they’re not only nice houses inside but they’re also pleasant to look at from the outside. We love them!” Asked if they would recommend O2i Design, Richard asserts: “Yes, very much so. We got on with Duncan and Andrea very well, we could always pop in to see them, and I leaned heavily on people like Duncan and our builder throughout the process.”

Frank adds: “We are very pleased with the house, and very pleased with O2i Design. Duncan and Andrea were always helpful and ready to try to accommodate anything we put to them that was possible, they were very obliging in that way.”

The work on site was carried out on both houses at the same time, with trades moving from one property to the other. Work started in 2014 and the project was completed in July 2015.