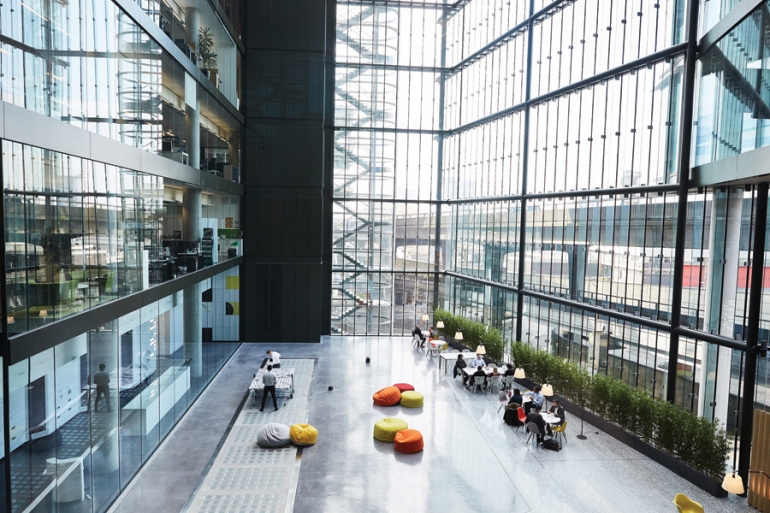 When your company wins a praiseworthy star in the 2016 Sunday Times ‘Best Companies to Work For’, it’s certainly something to shout about. But at Broadgate Estates’ new central office in London, known colloquially as The Hub, it’s the unseen and the unheard features that are pioneering future workplace development.

he leading property consultancy and management company, a subsidiary of British Land, moved to Two Kingdom Street at Paddington Central, a mixed-use scheme developed on the site of the old goods yards to the northwest of Paddington Station. This ultra-modern building is set between the busy elevated Westway and, to the south, the quieter environment of Paddington Basin, the landscaped spine of the development. Floor-to-ceiling windows overlook the stunning atrium and West London beyond.

Broadgate Estates, which manages and creates value for its clients’ assets across a portfolio of mixed-use developments, prestigious commercial buildings and shopping centres, had experienced radical growth and expansion necessitating more space for its people and its operational divisions. The new office also needed to reflect the company’s capabilities in quality and service delivery.

Connectivity was a key factor in selecting Paddington Central, with its exceptional position as a focus of travel into London and out to the rest of the UK. It also offered proximity to outdoor spaces including Little Venice and Hyde Park.

The Hub occupies 2429m² on the second floor of the eight-storey building, and is naturally sub-divided into three zones for meeting, working and socialising, which formed the canvas for the company’s refurbishment and fit-out plans. The team at Broadgate Estates stipulated an exacting ‘boardroom to yoga class’ design, execution and evaluation brief, to create a natural working environment that balances wellbeing and organisational effectiveness in equal measure.

The building’s existing BREEAM rating of ‘Excellent’ and EPC rating of C was a great starting point for the design. Working with architects Magnus Associates and services engineer Edward Pearce, the Broadgate Estates team stipulated the reuse of existing CAT A installations. The metering strategy addressed power, heating and cooling services to maintain low energy use, or where possible, reduce it.

Indoor air quality was addressed by stipulating the requirement for all finishes having low or no VOC or formaldehyde. Volatile organic compounds (VOCs) are organic chemicals that have a high vapour pressure at ordinary room temperature and include a variety of chemicals, some of which may have short and long-term adverse health effects. Paints, varnishes and wax all contain organic solvents, as do many cleaning, disinfecting, cosmetic, degreasing and hobby products.

Breathing formaldehyde vapour can irritate the eyes and nose, which can cause burning, stinging or itching sensations, a sore throat, watery eyes, blocked sinuses, a runny nose and sneezing. Not great in an office environment.

CO2 sensors were installed both to monitor wellbeing and to monitor the building’s central system; and post-occupancy evaluation was supplemented with post-completion air testing to prove air quality compounds were much lower than permissible levels.

Commented Anna Scally, Senior Project Manager at GVA Acuity real estate advisory business: “We tried to push the boundaries on this project. With the encouragement from Broadgate Estates, we looked closely at air quality.

Recently published studies have revealed the effects of materials that contain formaldehyde in the air and how this can affect productivity and the working environment. As a consequence we looked at everything from laminates and panelling to glues and paint finishes.

“It’s not often that you encounter a client that is completely committed to building a better working environment for all their people.”

The brief reflected Broadgate Estates’ own experiences and was communicated early in the process, allowing all team members to take ownership of the project. Undergoing BREEAM certification was key to demonstrating the company’s sustainability credentials and commitment to looking after its clients and employees.

Even the procurement stage encouraged a wider view. Added Anna Scally: “Local sourcing is always a challenge as is finding suppliers of environmentally-healthy products, which makes preparing ahead in the procurement process vital.”

Speaking about the project Steve Whyman, CEO at Broadgate Estates, said: “Since our move to The Hub, we’ve seen a positive impact on wellbeing and productivity. We’ve successfully recruited talent from major multinationals, attracting some of the industry’s ‘big hitters’ to join us, including surveyors and senior directors.

“We’ve also seen an increase in employee satisfaction, which has taken Broadgate Estates to our first One Star rating in The Sunday Times Best Companies to Work For. In short, we have brought our company’s vision to life within our own workplace.”

Added Anna Scally: “We’re starting to see some environmentally-driven initiatives such as low VOC or formaldehyde exclusion being applied to commercial environments. So much of this is unseen but the result can be a tangible improvement in office performance and the wellbeing of people who occupy them.”