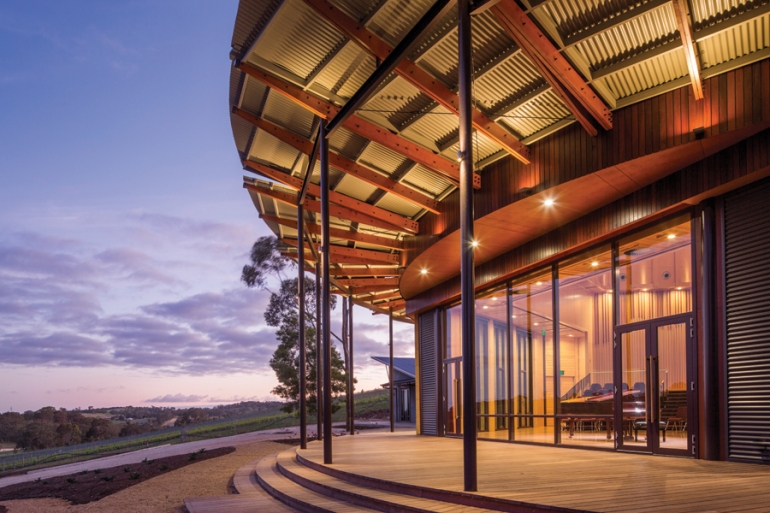 Self-sufficient cultural centre is music to the ears

The brief from the matriarch of a cosmetics fortune was to create a world-class yet intimate auditorium for the playing of chamber music in a natural setting. The result is a critically-acclaimed music venue that has featured on the big screen and been enjoyed by thousands of music lovers in its first year of operation.

geringa, (pronounced Ner-ring-ga), the Aboriginal word for she-oak, is perched on the hillside of Ngeringa Farm in the picturesque Adelaide Hills just outside Mount Barker on Williams Road. The $7.5m Ngeringa Cultural Centre has quickly become a favourite venue among musicians and audiences alike.

Designed by Adelaide-based Architect Anton Johnson, the multi-purpose 220-seat concert hall has been modelled to have a spacious and enveloping sound while preserving the intimate scale and aesthetic character of the space.

“Chamber music was always the central point of the brief and very closely allied to that was the rural location,” Johnson says.

“Without a doubt every musician who’s played in that space has remarked on the acoustics mainly in terms of the fullness and the quality of the sound. Already it’s starting to establish itself as a premier chamber music venue for Australia.”

The building featured in Scott Hicks’ latest offering Highly Strung, a feature-length documentary following the fortunes of the Australian String Quartet, which has performed at the venue several times including at the documentary’s finale.

But its story can be traced back to the 1980s when Biochemist Dr Jurgen Klein and his wife Ulrike, a Horticulturalist, moved to South Australia to start cosmetics and natural skincare company Jurlique in the Adelaide Hills.

Jurgen left Australia in the early 2000s and Jurlique was gradually divested to overseas interests. Ulrike, who has always had a passion for chamber music, has turned her attention to philanthropy through the Klein Family Foundation and Ngeringa Arts, named after the casuarina trees that grow on the Adelaide Hills property where Jurlique flourished.

In 2012, after Ulrike sold her remaining stake in Jurlique, the Klein Family Foundation pledged $3m toward a $6m Ngeringa Arts project to acquire a unique set of instruments handcrafted by Giovanni Battista Guadagnini, one of history’s foremost luthiers, in Italy from 1743 to 1784.

Three of the instruments have been secured through the Guadagnini Quartet Project and are on loan to the Adelaide-based Australian String Quartet, which also has use of a fourth Guadagnini. It is the world’s only matched quartet of Guadagnini’s.

Not content with providing the ASQ with instruments, Ngeringa Arts set about building a world-class venue for chamber music to be played in.

The centre’s commercial business model allows it to host functions such as weddings and conferences and also includes guest quarters for artists in residence. The raked seating is retractable, opening up a flat floor space to seat 150 dinner guests.

Its intimacy is enhanced with the audience seated around the performance space on three sides. A 9m wide and 4.2m high glass wall faces the summit of Mt Barker and the twin peaks, with a foreground view of a newly-designed garden.

Johnson says concerts are generally held at 3pm to maximise the view. “That orientation is directly east and certainly in the afternoon towards sunset the sun hits the mountain and it is particularly beautiful. It’s a very close integration and synergy between nature, the environment and music.

“The history of the farm itself and the whole basis of the Jurlique cosmetics was one of nature and organics and purity so that’s what’s come into the building as well.”

The property is also self-sufficient. A solar photovoltaic grid generates electricity and up to 250,000 litres of rainwater is collected and stored to run the centre. A further 250,000 litres is captured and stored for firefighting purposes and all of the sewage is dealt with on site.

The building materials have been selected for their sustainable natural qualities and rural character. Rammed earth walls are exposed inside and outside the building, sustainable plantation timber is used and the building is clad externally with corrugated iron.

The roof structure employs the engineering principles of the ancient reciprocal frame. The roof embodies simultaneously, energy and balance, in a visually dynamic structure. Spanning between the primary beams are smaller triangular panels, each with varying depths for acoustic diffusion. Externally the sweeping veranda roof over the deck fans up and out to embrace the rising view.

Johnson has a wide range of experience from schools to hotels, residential homes and office buildings. He has also designed a chamber music centre in Cape Town, South Africa.

“Certainly music is something that is quite close to my heart as well,” he says. “I think most people would associate acoustics with trying to keep sound out of buildings, but in this case we were actually dealing with a completely different concept where we are actually handling the sound within the space and modulating the reflections and the refraction of that sound in order to enhance its qualities.

“It’s there for people to judge themselves but certainly we’ve had very positive feedback. In every respect it was a very, very successful project and we have a happy client, which is what we need.”

Ngeringa Arts General Manager, Alison Beare, said the auditorium’s acoustics had been recognised by commentators as the best chamber music space in Australia.

“If you look at all of the detail on the walls, every piece of wood in the space has been calculated to give the optimum acoustical performance,” she says. “The carpenters who worked on this building realised they were involved in something really special. The acoustician would fly in from Brisbane to check the work and the absolute attention to detail and every finish was just extraordinary to watch.”