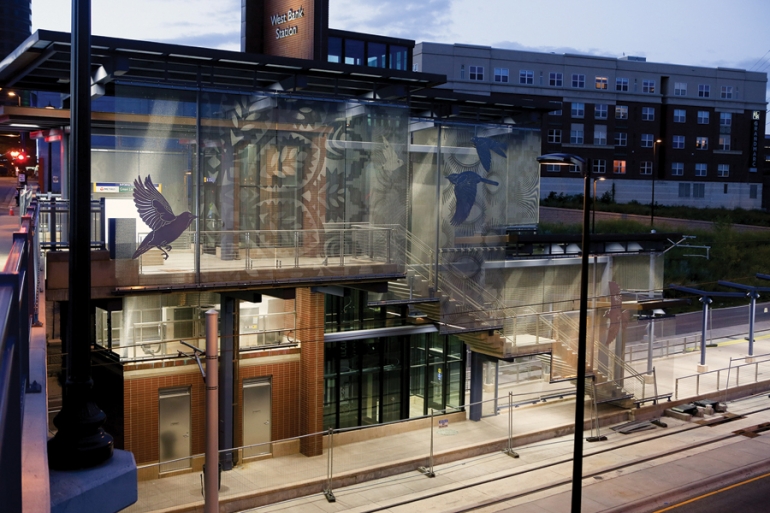 To bring the 100-year-old infrastructure between the Twin Cities of Saint Paul and Minneapolis in line with current requirements, the state of Minnesota implemented the biggest municipal rail throughout its history. To ensure protection from the sun, its transport hub has been provided with large-scale cladding in the form of metal fabrics and additional stainless steel birds.

ith 3.5 million inhabitants, the region surrounding the Twin Cities of Saint Paul and Minneapolis is among the 20 largest metropolitan areas in the United States. The Mississippi separates the capital of Minnesota, Saint Paul, from Cedar-Riverside, which is also known as West Bank. Day by day, tens of thousands of people commute between these three communities to get to work, university or school.

The state implemented a comprehensive municipal rail project to bring the 100-year-old infrastructure consisting of buses and congested roads in line with these requirements. A key element of this mammoth project is the so-called Central Corridor Light Rail Transit (CCLRT) with the transport hub West Bank Station. The AECOM firm of architects designed a two-story station at this location. To ensure protection from the sun, the building was provided with large-scale cladding in the form of Omega 1510 and 1550 metal fabrics from GKD. Through etching and the addition of stainless steel birds, the shimmering facade was transformed into an expressive work of art that reflects the eventful immigration history of the region.

Scandinavian immigrants sought a new life in the settlement on the upper stretch of the Mississippi in Minnesota, USA, in the middle of the 19th century. These initial settlements grew to become the Twin Cities of Minneapolis and Saint Paul, which are today an important economic and cultural centre in the Midwestern United States.

As the manufacturing industry went from strength to strength, the region attracted increasing numbers of migrants from all over the world from the beginning of the 20th century onward. Today, the region is viewed as a melting pot of nations, where over 100 different languages are spoken. However, the rapid population growth also took the transport infrastructure of the densely populated area to its limits as early as the 1970s. As a result, planning work on the largest local transport project in the history of Minnesota began in 1981, which also comprised the Central Corridor Light Rail Transit with the METRO Green Line. Today, this connects the centres of the Twin Cities with several of the most populous areas in the conurbation, also crossing the Mississippi.

The architectural firm AECOM, which was charged with the task of realisation, concentrated not only on functionality and aesthetics, but also on public art when designing the stations. For the particularly well-frequented West Bank Station, they chose a solar protection facade made of GKD metallic fabric. The textile skin in front of the extensively glazed station reflects sunlight, thus preventing the two-story building from heating up excessively in summer. At the same time, its transparency grants unhindered views of the outside surroundings and also, through the interior lighting, from the outside in. This visibility conveys a feeling of subjective safety to passengers.

Meanwhile, the high light transmission of the woven structure ensures a pleasant atmosphere and lots of natural light. Despite its intricate feel, the robust stainless steel fabric will withstand the adverse weather conditions that often prevail here with wind, rain, snow or frost for many years. The fabric even provides effective protection from the vandalism so often seen at public transport stops. What’s more, the material guarantees the cost-effectiveness required for transport buildings thanks to its durability and freedom from maintenance.

The shimmering membrane couples this complex and broad range of functions with an extraordinary visual appearance – as a delicate veil, it follows the stepped architecture of West Bank Station and lends a sense of visual peace to its detailed facade. Spotlights fitted outside create targeted light effects that change according to the position of the viewer and thus give the transparent fabric an unexpectedly opaque appearance.

This effect is given an additional dimension thanks to a creative interpretation by Nancy Blum, an Artist, Critic and Art Lecturer who is very well-known in the USA. The architects’ concept for three of the city stations for CCLRT included her integrated artworks. The woven stainless steel fabric skin at West Bank Station inspired Nancy Blum to create an artwork visualising the eventful history of Cedar-Riverside as a transit point for people from many different nations. That’s why the metal fabric panels in front of the stairways were to be decorated with ethnic patterns, with designs reminiscent of the three main regions of origin of the immigrants – Scandinavia, Asia and Eastern Africa.

GKD realised this artistic idea by means of etchings on the Omega 1510 fabric. The smooth upper surface and relatively dense structure of this fabric make it particularly well-suited for this procedure, in which the fabric surface is modified slightly. On the basis of the patterns designed by Nancy Blum, GKD produced a screen that covered all surfaces that were not to be altered. The fabric specialist then used a blasting agent to modify the metallic surface precisely according to the artist’s specification. The durable patterns created using this method were instantly resistant to UV and severe weather conditions without the need for any special treatment. Daylight transmittance also remains just as high. Depending on the incidence of light and the viewing angle, the patterns can appear either transparent or opaque. However, they derive their special effect through their seamless integration into the building. Nancy Blum added a third dimension to these etched patterns by having silhouette-style pictures of migratory birds typical of the regions mounted on both treated and untreated woven panels. These large stainless steel motifs link the coming and going of the various migrant groups with that of the migratory birds, which follow them on their journey along the Mississippi. Combined with the ethnic patterns, this creates an almost poetic image of dynamic interaction in a region steeped in such a rich tradition.