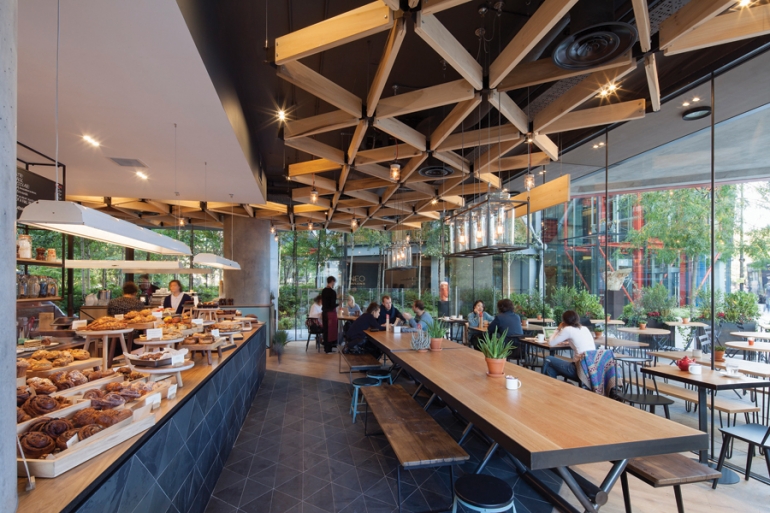 GAIL’s Artisan Bakery secured a 195m2 space on the ground floor of Building C of the Neo Bankside development and briefed the team at Holland Harvey – led by directors Jonathan Harvey and Richard Holland alongside lead designer Emma Salter – to create a working bakery and cafe that would serve customers throughout the day in a welcoming environment.

The challenge was how to design a space which truly represented the bakery’s honest approach to making quality products and acting as a hub for the community, while appreciating its surrounding environment and making a bold statement.

Working in such a well-designed building with solid and substantial foundations and structure means resources didn’t have to be spent getting the unit fit for purpose. However, while the existing structure, layout and build certainly had their benefits, the team would need to ensure it used all of its features to their full advantage – a particular challenge in this case, as three of the four walls are floor to ceiling glazing.

When designing the space, there was nowhere to hide the less glamorous features of the working bakery as nearly everything inside the unit is visible from outside. No modifications could be made to the external facade and all furniture, fixtures and equipment had to work behind the existing glass. Because people can see everything that is going on inside, one of the prime aims was to allow people to see the kitchen in action, while showcasing its baked produce and providing an attractive, welcoming environment for customers to sit and eat.

One of the immediately noticeable characteristics of the internal space is the use of geometric shapes and lines, emulating the angular nature of the property’s plan. A ceiling grid formed of 100 triangles, constructed from 89 steel nodes and 189 timber struts made by Weber Industries is a particularly striking feature. Welsh slate cladding on the floor, laid out in triangular formation, further echoes the steel trusses on the external facade of the building and wraps up onto the counter to draw people’s attention to the baked produce.

The use of tactile materials – such as the timber and hand cut Welsh slate, all of which were responsibly sourced – contrasts the angular nature of the design, softening the harsh lines and angles and creating a comfortable and welcoming environment. The colour palette of white and teal next to the tones of the timber and slate is not too overbearing, yet is still in line with the colour pop effect of the building’s exterior.

Bringing the outside in

In order to encourage interaction between the outdoor and indoor areas, part of the design introduces planting – inspired by the surrounding gardens – into the bakery. The inclusion of a green wall, peppered with foliage, breaks up the geometrical design and fuses the internal and external space, mirroring the attractive landscaped gardens in the courtyard visible from inside the bakery. An outdoor space with tables, chairs and planters have also been added to allow people to sit outside and enjoy the space.

The large use of glass means the space is flooded which lots of natural light. Not only has this been used to its full advantage to create a bright and airy space, but it also means the bakery – and environment – can benefit from using low energy light fittings.

Careful consideration was given to how the internal tables and seating, which cater for 74 customers, were situated in the unit. As well as being a high quality, neighbourhood bakery, the space also needed to be a place where people could meet and socialise. The team at Holland Harvey designed a long wooden oak table to seat 20 people, which runs through the centre of the bakery and encourages people to come together and make the experience of enjoying the food and drink a communal one. This table is supplemented with a combination of two, three and four seater tables, which can be moved around to create different formations, and a bespoke designed banquette underneath the green wall also creates additional, informal seating.

Big and bold, small and proud

The juxtaposing characters of the Neo Bankside building and the bakery may not at first seem an obvious match. However, with careful planning and respect for each of their unique qualities, the strong, dominating exterior has been fused effectively with the bakery’s handmade, artisanal interior.

With clever design and smart solutions, a space has been created which is as true to its surrounding environment as it is to its own ethos. Attention to detail and high quality finishes were paramount in achieving this – not only to be in keeping with the Neo Bankside building but to also reflect the care, time and skill the bakery spends on creating superior baked produce.

The space, which so carefully introduces the outside in and vice versa, is designed to fit around people’s lifestyles. Attracting both residents of the Neo Bankside development and the general public, it is a warm, welcoming and inclusive environment where people can pop in to buy fresh bread, grab a quick coffee and cake, or spend some leisurely time watching the world go by.

The project commenced in March 2015 and completed in September 2015. BB Contracts was the main contractor on the project, Jigsaw Joinery carried out the carpentry work and the bespoke ceiling was made by Weber Industries.