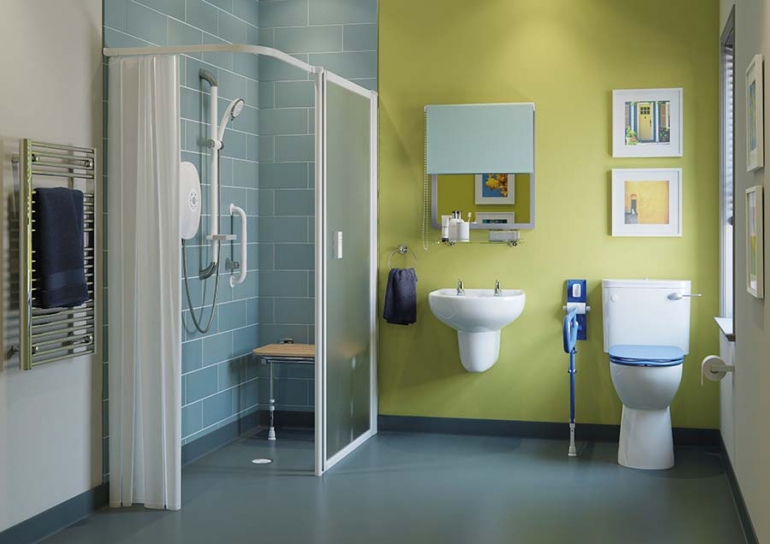 In the UK, the number of people aged 60 or over is expected to pass the 20 million mark by 2030. With an ageing population, dementia is on the rise. Here, Stuart Reynolds, Head of Product and Marketing at AKW, discusses how architects and house-builders can design longevity into their build projects by creating bathrooms that are more dementia-friendly, promoting both dignity and safety for an ageing population..

Those living with dementia experience a range of issues, including memory loss and disorientation. This can prove particularly dangerous in the bathroom, where hard surfaces and water combine to make falling an ever-present risk. However, by following some basic guidelines, it is possible to create dementia-friendly bathrooms, using a person-centric approach to design.

Flooring: Consistent flooring shades are crucial as a person with dementia can interpret a change in floor colour as a step, leading to trips or falls on a level surface. Dark colours can seem like gaping holes, and a speckled effect can appear to be flecks of dirt. Ultimately, a light, uniform colour such as those in the AKW anti-slip vinyl flooring range are ideal.

Walls and contrast: Incorporating contrasting colours in bathrooms can help users with dementia to effectively define and locate separate sections of the room, such as the shower and toilet areas. For example, contrast should be used to help differentiate a grab bar from a wall and the toilet seat from the pan. A minimum LRV (light-reflecting value) of 30 points of difference between colours is needed.

Lighting: Sufficient light levels are needed in areas where specific tasks are undertaken. This means that a mix of task-specific lighting and increased overall ambient lighting will ensure the bathroom is sufficiently lit. According to a lighting guide prepared by AKW and occupational therapists from The OT Service, people with both sight loss and dementia benefit from increased light levels in the bathroom of 600-700 lumens per m2 for general lighting and 700-800 lumens per m2 for task lighting.

Mirrored surfaces: For a number of people with dementia, the reflection of their faces can make them think another person is in the room with them. To overcome this, it is wise to fit a roller blind above the sink, so the mirror can be covered when necessary.

As dementia progresses so too does the loss of safety awareness, making those with the condition especially susceptible to scalding:

• AKW’s dementia-friendly SmartCare Plus shower automatically shuts down after 30 minutes of use, to avoid accidental overflows.

People with dementia are twice as likely to fall as their peers, as a result:

• Choose PET plastic shower screens, such as AKW’s Silverdale screen panels, rather than glass ones.

Dementia design in practice in Manchester

An example of dementia-friendly design in practice is a recent project that involved The Manchester Local Care Organisation. This community-based care organisation is used to looking at design differently, and its equipment and adaptations service took an innovative approach to lighting two accessible bathroom refurbishments; one of which was for a person with dementia in an owner-occupied property and the other was for a person living with visual impairment in a shared ownership property.

Following talks with AKW – where the company’s new Task Focused Lighting Kit and ‘occupational therapist advised lighting guide’ were discussed – the team at the equipment and adaptations service decided to introduce the lighting to two of its up-and-coming bathroom refurbishments, as people with mobility issues, dementia or visual impairments need more tailored light to navigate and use the space easily.

With this in mind, the total refurbishment of both bathrooms not only included the replacement of baths with wetrooms, new tiling and flooring and accessibility features – such as grab-rails and shower seats – but the lighting was also installed as per AKW’s Task Focused Lighting Guide recommendations. This meant that in each space, the inadequate incandescent lightbulbs were replaced with one long-lasting, bright (1764lm) ambient LED ceiling lights for general illumination. In addition, five narrow beam (30º) ceiling LED task lights were installed: three over the shower area and one over both the basin and toilet.

John Roberts, Senior Technical Officer at Manchester’s Services for Independent Living, comments: “The overarching mission of The Manchester Local Care Organisation is to make a positive contribution to help people in Manchester live longer and enjoy better health than many do now. As well as specifying high-contrast tiles for both installations, to minimise any confusion when navigating around the space, we specified AKW’s lighting kit. The feedback from both properties relating to the lighting and contrasting tiles and floorcovering has been overwhelmingly positive, and we are looking to roll-out the use of this lighting in further refurbishments.”

A dementia-friendly bathroom is not just about highlighting risk areas and resolving issues, but it is about promoting independence. With a well-designed bathroom space, a person’s wellbeing and confidence are boosted, enabling them to engage more readily in day-to-day activities in a high-risk space. With a little time and investment, architects and builders can create dementia-friendly bathrooms that have the potential to promote independence for years to come, as well as to help reduce accidents in refurbishments and new homes across the UK.