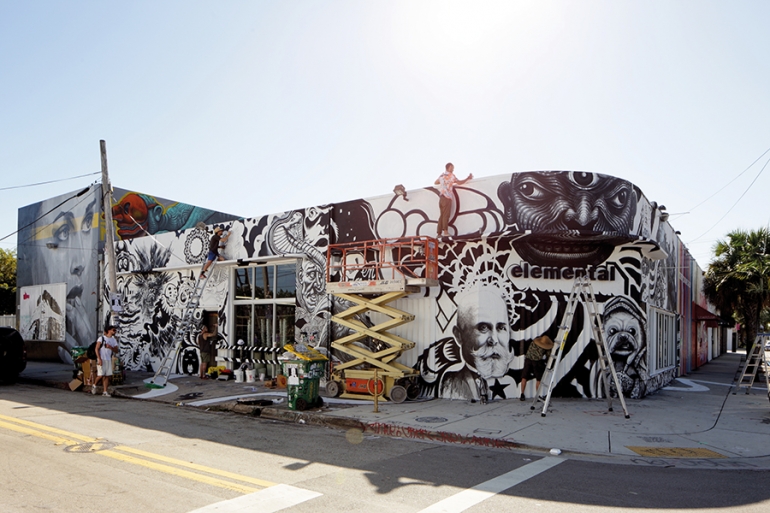 What role can art, and in particular public art, play in making an area more desirable? This question might seem like an academic exercise, but it has become a pertinent topic of discussion for property developers and investors. Kia Knight, Founder and Director of 1-of-1 Art Group, discusses further.

ne must begin by establishing what we mean by ‘public art’. Indeed, terms such as graffiti and street art are often unfairly burdened by negative connotations and, importantly, they also do a disservice to the artists behind the work.

Simply put, public art is art in any form that is planned and executed within the public domain. And, in truth, some of the world’s finest contemporary artists ply their trade within the broad sphere of public art.

The relationship between public art, cultural vibrancy and the desirability of an area warrants some attention.

Firstly, let us look at the connection between public art and cultural vibrancy.

Public art is typically a central part of cultural place-making. This concept, which dates back to the 1960s and 70s, centres on an exploration of a society’s relationship with a specific place and, moreover, what people would like that place to be like from a cultural perspective.

Cara Courage writes in Arts Professional: “To urban theorists and practitioners, place-making is the creation of a distinct place-centred identity via design. With a cultural turn, others see it as the value-led practice of building communities and the creation of public spaces that help us interact with each other and contribute to individual and communal wellbeing.”

Public art is an important element of cultural place-making. It is integral to how public spaces – be it a community garden, a central square or blank walls – can be transformed into areas that people want to engage with. Public art improves the vibrancy of the area and makes it more attractive from a cultural perspective; in turn, as an area’s attractiveness a place to live, work or visit increases, so too does its commercial viability.

And so the connection between public art, cultural place-making and property developers becomes clear. If the collaboration between artists, developers and landowners can be effectively managed, there is significant value to be achieved by each party.

There are a number of excellent examples of this from recent decades, which clearly highlight the mutually beneficial relationship that can be formed between public art and property developers.

Few people on this side of the Atlantic will be familiar with the redevelopment of Wynwood Walls in Miami, US. A decade ago, developer Goldman Properties successfully took six-privately owned warehouses located in a run-down Miami neighbourhood and turned them into a thriving cultural and social hub.

Public art was at the heart of this project, which had the effect of injecting life into an otherwise languishing area. For those who owned and developed real estate in the region, it meant far more attractive returns – it is why Goldman Properties have been invited to undertake the same process in other neighbourhoods across the US.

The example of the French city of Nantes provides a much broader illustration of how valuable public art and cultural place-making can be from a commercial perspective. Not only did Nantes undergo a citywide transformation, but this process took place over several decades.

Heavily scarred by the Second World War, Nantes limped its way into the 1980s, known mainly as a place to avoid. Indeed, Artistic Director Jean Blaise, who drove a cultural renaissance in the city from the mid-1980s, stated in the Guardian that when this project began 35 years ago Nantes was “culturally dead”.

Since then, however, a multi-faceted campaign saw global artists invited to “take over every part of the town” with public art, while regular festivals, events and performances became a mainstay of the city’s cultural makeup.

Nantes was, to quote Blaise, “impregnated” with contemporary art. As a result, it now stands out as one of the most vibrant places in Western Europe. Indeed, unemployment is now below the national average (it was previously well above this average), between 6000 and 9000 people relocate to the city each year, and the business sector is performing well.

Closer to home, there have been a number of prominent examples in recent years showing how public art can contribute significantly towards the overall attractiveness of an inner-city borough.

Interestingly, in the UK, Section 106 of the 1990 Town & Country Planning Act has helped to actively encourage property developers to include public art within their plans. S106 requires the person or organisation developing on a piece of land to contribute to the infrastructure of the area, and cultural additions have often formed part of this “mitigating” process.

Kings Cross serves as a useful example. In 2012, when a Georgian building opposite St Pancras became host to London’s largest mural – the Megaro Project by Agents of Change – it added a previously absent degree of cultural heft to an area that, while refurbished, lacked character.

Driven, in part at least, by this reimagining of the development, property prices have risen dramatically in response and the area has now become a thriving hub for cultural and local events.

In Pimlico, the recent Grosvenor Waterside project saw the construction of a modern residential block. However, alongside the flats was integrated public art in the form of Clare Woods’ etched artwork on an aluminium facade as well as Richard Wilson’s ‘Shack Stack’ sculpture in the central square. In total, the developers purportedly invested more than £1.5m in the cultural elements of this project.

Meanwhile, Shoreditch offers a much broader illustration of the mutually beneficial relationship that can be formed between public art and property development.

For example, Shoreditch landowner Dominic White will be working in conjunction with The 1-of-1 Art Group and the Arts Council as part of the Mas . ter . wәrks public art exhibition in Shoreditch, east London. Taking place in October 2019,

Mas . ter . wәrks will see a collection of privately owned building facades transformed into canvases, with the public spaces between them acting as a gallery floor. The result will be an outdoor museum of public art, celebrating the work of some the world’s finest artists.

Working alonsgide local property developers, Mas . ter . wәrks will be one of the largest concentrated public displays of world class public art. More than 20 major works of art on giant wall canvases will be produced over a seven-day period by internationally acclaimed artists from more than 15 countries. The works will be as culturally diverse as socially and environmentally aware.

Research in 2017 by the Affordable Art Fair found that 84% of Londoners believe that public art boosts community spirit. Furthermore, it also has an important role to play in promoting a particular ideology or championing a certain cause.

The aforementioned Mas . ter . wәrks will be running a street art festival in central London, and the theme of the event is the environment and how we can tackle serious ecological crises that are threatening the planet – this serves as a clear example of how street art and the property industry can come together to raise awareness of important issues.