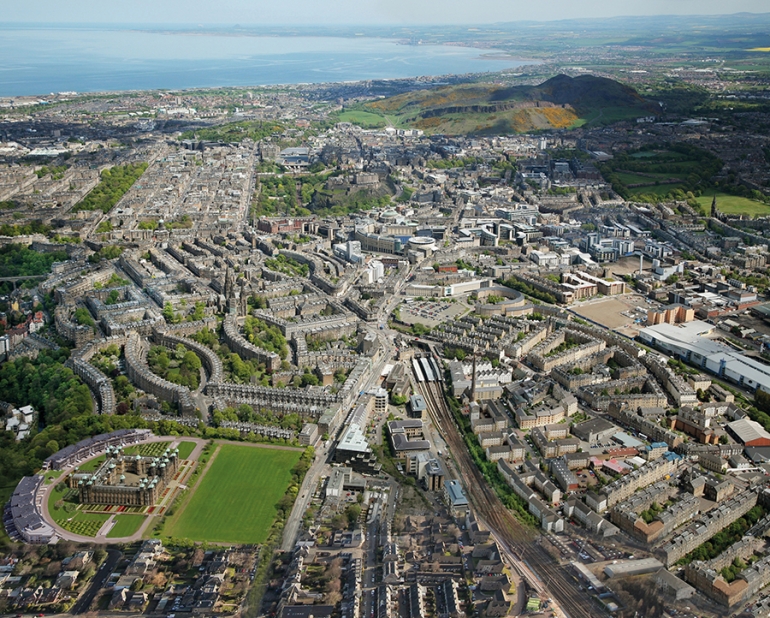 An ultra-modern development has taken its layout from a classic design inspiration – which has signified premium urban living since the days of the Roman Empire.

irectly inspired by the famous Georgian crescents of Edinburgh and Bath, The Crescent by CALA Homes (East) is a collection of luxury apartments, duplexes and penthouses set within the city’s iconic Donaldson’s estate, within the Scottish capital’s UNESCO World Heritage Site.

The classical shape of the development is paired with grandiose glass frontage, resulting in a fitting modern innovation to the iconic Georgian crescents in the surrounding Edinburgh New Town.

Designed by the celebrated Architect Richard Murphy OBE, aerial visuals show how closely linked The Crescent is with the surrounding area – and how the shape naturally creates an attractive half-moon space to the front.

Gillian Tait, Planning and Design Director with CALA Homes (East), said: “As Edinburgh’s New Town began to evolve, crescents and beautiful communal gardens were designed to add a level of separation and privacy from the already existing grid structures.

“We believed this to be of particular importance, as The Crescent was designed from the outset to not be just ‘worthy’ of its place on the world heritage site, but to enhance it.”

One of the most prominent buildings of such structure is the Royal Crescent in Bath. While its fashionable appeal and elegant yet commanding aesthetic was designed to attract the Georgian upper classes, it also catered to the newly-emerging middle class, increasingly eager to indulge in their desire to taste the lifestyle of the nobility and the heights of luxurious living.

Is this the ultimate home study? Architects and designers have heralded the mezzanine studies that are a feature at Scotland’s most upmarket new development. Boasting a dramatic view out to the grounds and building of one of the country’s most iconic estates, the studies at The Crescent at Donaldson’s benefit from the sweeping homes’ almost entirely glass frontage. Architect Richard Murphy OBE, who led the bold design of the project, said: “These amazing study levels are made possible thanks to the freedom that CALA granted us to create dynamic spaces – with homes across multiple levels and not bound by fixed lateral storeys. “This is rare – and typically only seen in seminal architectural projects and is certainly not associated with residential projects. This directly enables us to create the double-height living areas that enable the south-facing mezzanine studies at the front of the home – benefiting from the outlook to Donaldson’s and beyond.”

However, the pivotal moment in the history of the crescent shape can be traced back to the evolution of the Roman empire.

Following the creation of a new and strong cement, the Romans were able to create sweeping curves throughout their architecture to depict grandeur and space – with their architectural style evident at the Royal Crescent.

Across centuries, the crescent symbol has been used to represent new beginnings throughout most of ancient cultures and religions.

Even the term ‘crescent’ originates from the Latin word cres meaning “to bring forth” or “create” and crescere meaning to “grow” or “thrive”.

Beyond its architectural influence, the crescent is one of the oldest symbols in human history, having been used in art from the Babylonian period in Mesopotamia from 626BC.

Gillian Tait added: “The fascinating journey of the crescent shape throughout history, whether in art, architecture or urban planning, gives this shape real excitement and appeal.

“The Crescent at Donaldson’s adds a brand-new chapter to this area’s remarkable architecture and pays tribute to its standing within Edinburgh’s World Heritage Site.

“We’re delighted to be able to now sell these incredible homes, which we hope will become part of another celebrated crescent for generations to come.”

The Crescent comprises some of the city’s most sought-after residences, with early demand already high. Construction started on The Crescent in the summer of 2017, including substantial excavations to create an underground car park to ensure the visibility of cars on site is kept to a minimum once it is completed.