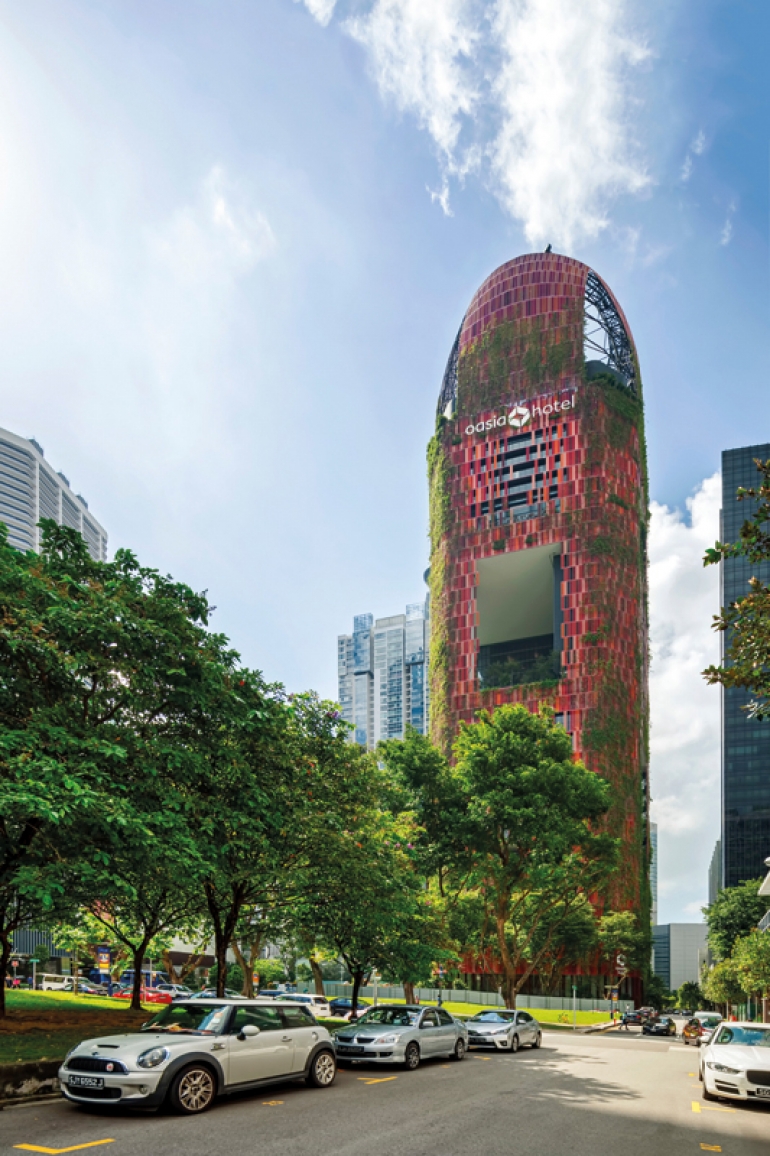 An oasitic escape in Downtown Singapore

The Oasia Hotel in the Central Business District, Singapore, is by all means and standards a unique project, redefining what a high-rise can be in humid tropical climates.

n contrast to the conventional, completely sealed-off, air-conditioned tower, this hotel – designed by local office WOHA – merges architecture and nature and combines indoor and outdoor spaces in a striking fashion. According to the architects, the aim was “to create an alternative imagery for commercial high-rise developments. It combines innovative ways to intensify land use with a tropical approach that showcases a perforated, permeable, furry, verdant tower.”

The tower, which has a height of 190m, contains four large outdoor spaces: three enormous verandas on the sixth, 12th and 21st floor, as well as a roof terrace on the 27th floor. This roof terrace is surrounded and protected by a 10-storey-high screen, covered in the same red aluminium mesh cladding as the rest of the tower. This facade will gradually be overgrown by 21 species of creepers and vines, creating a lively contrast between vibrant reds and lush greens.

The Oasia is, like the majority of WOHA’s work, located in Singapore. WOHA was founded in 1994 by Singaporean, Wong Mun Summ, in partnership with Richard Hassell, who hails from Australia and moved to Singapore in 1989.

While the pursuit of sustainability is often accompanied by humourless earnestness, WOHA shows that it prefers to stand apart. This Oasia Hotel, which is part of an eponymous chain, combines sustainability with delight, two terms that are prominently present in the office’s design philosophy.

Aside from the red facade – soon to be completely green – the sky gardens also offer greenery, fresh air and opportunities for natural cross-ventilation, as well as representing the most visibly sustainable and delightful, aspects of the building.

The sky gardens came about in response to the client’s brief, which asked for distinct areas in the hotel. Given the small footprint, WOHA adopted what it calls “a club sandwich approach by creating a series of different strata, each with its own sky garden”. Introducing these sky gardens, which WOHA describes as “elevated ground levels”, allowed “the precious, but limited, ground floor space to be multiplied, creating generous public areas for recreation and social interaction throughout the high-rise”.

While WOHA can be credited for the architecture of the tower itself and the concept of stacking layers, the actual design of the sky gardens is the work of Spanish Designer and Architect, Patricia Urquiola, who was responsible for all interiors as well as the outdoor spaces of the hotel. Urquiola adds a breezy elegance to WOHA’s delightful, quirky architecture.

For the pools on the 21st and 27th floor, she has used AGROB BUCHTAL tiles from the Chroma series. Each pool has a different character. The pool on the sixth floor is part of a gym; on the 21st floor, the pool acts as a stylish extension of the lounge club. Left and right of the pool itself, which is tiled in a light and dark blue chevron pattern, is a wading pool, just deep enough to get your feet wet while sipping a cocktail.

The rooftop pool consists of two parts, on either side of the rooftop restaurant. Unlike most rooftop amenities in hotels, which are all about the panorama, here the city’s skyline is almost completely concealed by the vegetated screen. This underlines the unconventionality of WOHA’s architecture. Instead of a view, this rooftop offers a place of unexpected intimacy and tranquillity, a surprisingly oasitic escape from the bustle of the city.