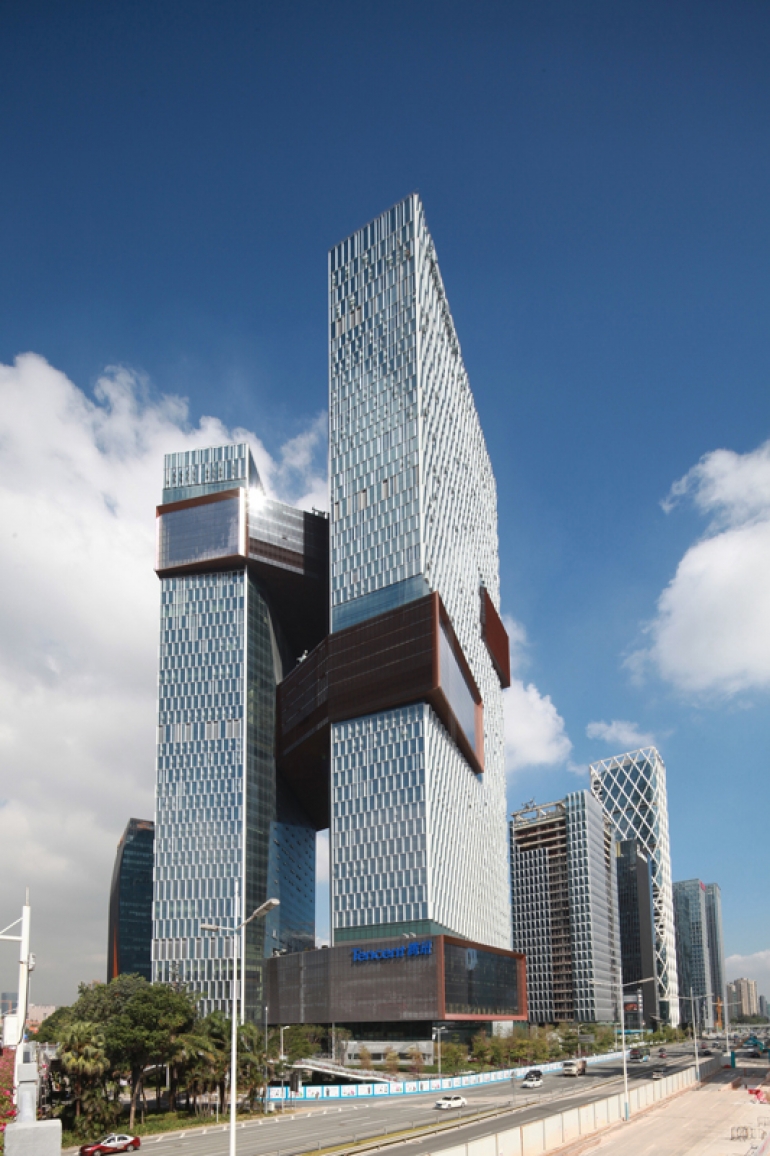 In China, the name Shenzhen is associated with frenetic pace. The city’s metamorphosis from a fishing village with 30,000 residents into a 15 million-strong metropolis took just 30 years. A start-up at this location required only two decades to become the world’s fourth-largest industrial enterprise. Tencent, the high-tech concern that started out as an email provider, has already overtaken Facebook in terms of its market value.

ew York-based NBBJ Architects designed the new HQ of the high-flying company as a statement of a new era of campus buildings. Two towers made of glass and steel, that shimmer in the sun and unite the copper-coloured pedestrian bridges, resemble robots hugging one another. When deciding on the cladding for the large atrium, the company went for a golden metal fabric from GKD (Gebr. Kufferath AG), which was recommended by French Designer, Alain Bony.

Shenzhen lies directly on the border with Hong Kong in the southern Chinese province of Guangdong. Named an exclusive economic zone in 1980, the once sleepy fishing village has developed into a prosperous market economy under state control. Countless skyscrapers today form a skyline that can hold its own in comparisons with Manhattan. One in three smartphones sold in the world is fabricated here. Yet Shenzhen has developed from the world’s workbench into China’s Silicon Valley. The majority of residents are less than 30 years old. Numerous international concerns are based here, and nowhere in China is the per capita income higher. Thanks to massive economic growth, Shenzhen is one of the fastest-growing cities in China, making property in the city a geographically restricted commodity. Despite being one of the city’s most famous children, internet giant Tencent is still not well known outside China. The inventor of the two most popular apps in China – QQ and WeChat – is today also a market leader for online games, and offers video streaming services, and generates 20% of its revenue from advertising alone. The company has been working hard on international expansion for quite some time and has shareholdings in various companies, including Snapchat and Tesla. It has been enjoying constant and fast growth since being founded in 1998.

Just one year after completion of the first new company building in Shenzhen for 15,000 employees, planning work started on a new global HQ, which offers enough space for a further 12,000 employees. Tencent commissioned renowned American architecture firm NBBJ, which has already built many award-winning headquarters for high-tech companies such as Amazon, Google, Microsoft, or Samsung, to design the new building. The team around Jonathan Ward fended off six competitors to win the order with an entirely new campus concept. Tencent was looking for a traditional campus based on the US model. The goal was to create a comfortable, central meeting point in a spacious, attractive and natural environment, where people could automatically meet, chat and find new ideas. However, the plot for the new HQ was located right in the heart of the city at an intersection of the multi-laned city expressways. As such, the only way to secure sufficient space in the small footprint was to design a skyscraper. Yet Tencent was concerned that a building of this type would not allow employees from various teams, departments, corridors and floors to engage in regular contact with one another. NBBJ, therefore, merged the benefits of both approaches – inspiring spaciousness and inner-city spatial efficiency – to create a completely new concept that reimagines the campus idea and implements it vertically. To this end, the concept of a skyscraper was divided up into two buildings and then given the qualities of a classic campus. The Tencent Seafront Towers comprise two towers, boasting 50 and 39 floors respectively, which were constructed to give the appearance of being slightly intertwined with one another. The offset height reduces the load of the tropical winds common in the region, while at the same time providing ventilation for the atrium located between the two towers. The towers also provide shade for one another and thereby support the intelligent integrated energy concept.

Bridges as links to real life

The key to the vertical campus concept, however, are the three sky bridges, which cross as horizontal meeting areas. From a visual perspective, the copper-coloured walkways give the towers a soul, as they appear to be hugging one another. They are logically referred to as links and make a contribution to movement and networking with topic-specific offers. While the link on the first floor above the lobby with cafe, exhibition space and auditorium is used for cultural exchange, the central link on the 21st floor is ideal for rest, recovery and health promotion. Staff can relax and unwind here in meditation rooms, a basketball court, a gym, a swimming pool, games rooms and even a running track. The highest of the three links on the 34th floor is dedicated to the topic of knowledge, boasting a library and multiple conference rooms. All of the links have roof terraces containing landscaped gardens. To ensure that they cater to their intended function as places of communication, collaboration and inspiration, the architects at NBBJ designed an elevator system for the HQ, so that all employees can regularly spend time in these meeting areas. Express elevators from the lobby travel only as far as the bridges. The employees then enter local elevators to take them to their floor. From a design perspective, this is the fastest way to reach any office or location in the towers. This makes the links the perfect counterpart to the central square in a traditional campus, where employees automatically meet, even if they work in different buildings. They engage in spontaneous conversations here on their way from the bus station located beneath the towers or the parking areas to their office, in the queue for the juice bar or even on their way to play sports. Thanks to the bridges, these social meeting points are distributed across the entire HQ like in a city. This allows social networks, the key focus of operations for Tencent, to become genuinely accessible and experienceable. This systematically designed and yet organic networking produces precisely the kind of synergies that lead to the collaboration and inspiration Tencent strives for – as a prerequisite for further growth.

Golden network as a filter between inside and out

The conceptual design of the lobby, which is open to the public from two sides, provides for additional hustle and bustle, as well as social meetings. This makes it a much-used route from other parts of the city to the Nanshan high-tech district. Just like the entire building, this central intersection between the inside and outside world was designed by the architects as a conscious statement of networking. When cladding three sides of the atrium, which is located above the lobby, the architects, therefore, chose metal fabric from GKD. A total of 1850m2 of this material is used to create a golden net that encapsulates the three-floor auditorium. Some 28 panels, each measuring 4m wide and 16.5m high, were used to create these hanging shrouds. Their sophisticated texture facilitates views into the atrium from the lobby, as well as open views down into the entrance hall. The textile shell also serves as efficient fall guard protection here. Visually, it acts like a delicate veil in harmonising the effects of the corridors and rooms of the atrium located behind it. GKD was commissioned with developing a new special fabric for the design of the cladding. To create it, golden-anodised aluminium wires and tubes were interwoven in three-wire warp wire groups made of untreated stainless steel at varying intervals. The various diameters of the fabric components – 4mm-thick wires and 12mm-thick tubes – lead to significant differences in tension in the weaving process. These were wholly equalised using special weaving techniques so that the fabric reliably complies with the static requirements of the large-format skin. Installation of the fabric also required the expert from Germany to demonstrate its decades of expertise. For example, the tubes had to be aligned precisely in the panels to create the appearance of a seemingly endless texture. Definition of the golden colour to be used was also a particular requirement of the planners. The homogeneity of this colour not only needed to be guaranteed across the entire area, but also had to meet the high expectations of the designers with regard to the appearance of the fabric when viewed in various light conditions. The subtle lustre of the soft golden colour chosen allows the atrium to appear caressed by the sun and lends the lobby a sense of warmth to contrast with its cool grey marble floor, walls and aluminium screens. In the atrium itself, the selected colour scheme also matches the wooden finish of the wall and ceiling cladding. The golden membrane then acts like a fine business card for the HQ, which underlines the image of a truly important concern thanks to its size and aesthetics and combines this with maximum interaction of the environment and employees.