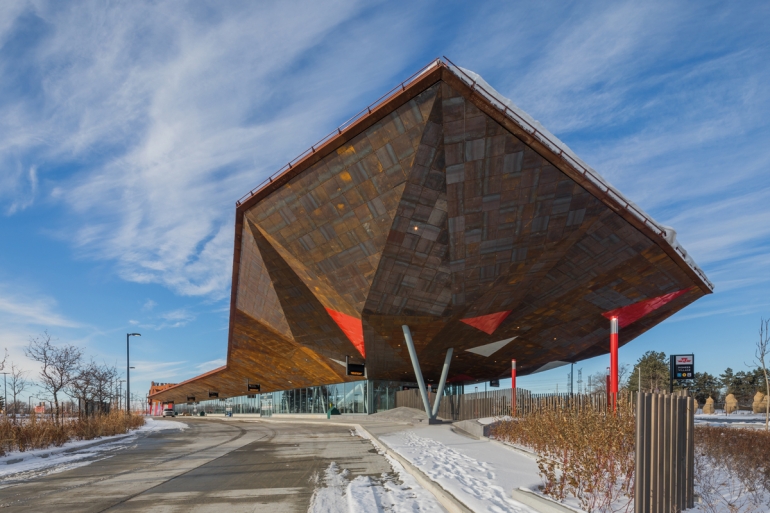 he Toronto-York Spadina Subway Extension Project will provide a critical extension for the existing TTC subway system across the municipal boundary between the City of Toronto and the Regional Municipality of York. Pioneer Village Station straddles the border of York Region, beneath the intersection of Steeles Avenue West and Northwest Gate, anchoring a corner of York University Campus. The station will serve as an integrated regional transport hub serving up to 20,000 subway passenger trips daily, providing 1881 commuter parking spaces and two separate regional bus terminals. The location is otherwise underdeveloped and it is intended that the station entrances and bus terminals will create a public focal point that will serve the future development of the surrounding area, beginning with Steeles Avenue West.

The subway station’s entrances were designed as a pair of sculptural structures; their height exceeding that necessary, to increase their visibility – “We learn a lot from cathedrals,” commented Will Alsop. Rendered in weathering steel, these two structures mirror each other in shape and scale. The bus station canopy – also corten steel – has a huge cantilevered roof, the surface of which is planted with meadow grasses to create a ‘green roof’ and to provide shelter for waiting passengers.

Both Pioneer Village station and Finch West station comprise beautifully executed concrete work – in Pioneer Village the interior walls are faceted, highly-polished concrete and the supporting columns along the length of the platforms are angled and ovoid in section.

‘LightSpell’, designed by realities:united, Berlin, is a ‘super-sculpture’; a hybrid between art and the lighting of the subway station. The interactive installation consists of a suspended array of 40 light elements that run along the ceiling throughout the station. Each element produces the alphabet; special characters and numerals, enabling passengers to send messages that appear on the display. The debate on censorship of this installation is ongoing.

Finch West station is located at the intersection of Keele Street and Finch Avenue West. The hydro corridor to the north of the station accommodates commuter parking for 347 vehicles, passenger pick-up and drop-off with associated access roads from Keele Street. Bruce McLean, Alsop’s long-term collaborator, was appointed as the artist for the station, and in this particular case, the art is totally integrated into the architecture of this structure. McLean was inspired by ancient architecture – the external columns at Finch West refer to Greek caryatids and those supporting the underground roof were influenced by 6000-year-old Minorcan pillars that would have supported underground houses. The sculptural concrete forms are integrated with the supporting columns of the substation and entrance buildings, the bus canopy and double-height columns. Every visible aspect of the public space of this project aims to blend the boundaries between art and architecture.

Of both Pioneer Village and Finch West stations, Alsop said: “I have to assume that on one of those really cold, miserable January mornings... there will be people down there travelling to a job that they’d probably rather not do. What I want them to feel is a little bit of cheer, a little bit of joy.”