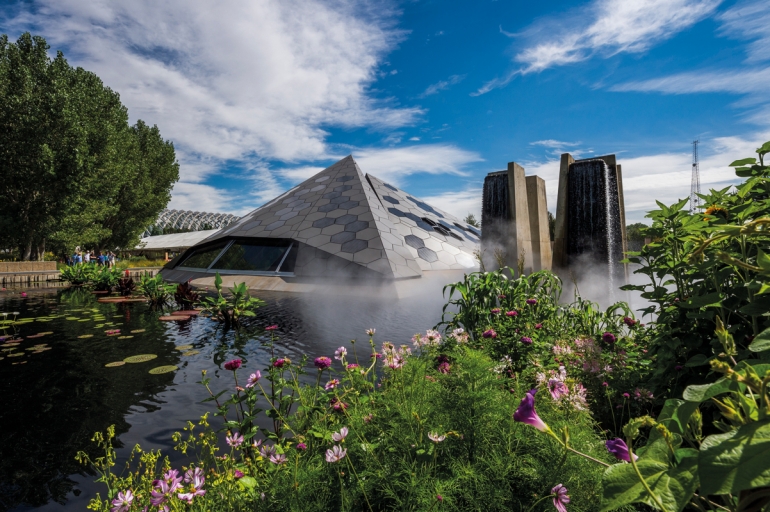 Denver Botanic Gardens in Colorado, USA, is a community-based botanical garden that aims to educate and enthuse its visitors around the importance of conservation. With green intentions at its core, the Denver Botanic Gardens team further implemented its environmentally-friendly ethos with the inclusion of the Science Pyramid.

his new addition to the garden has allowed the community of Denver to look at nature in a completely new way; with an exhibition that makes use of interactive technology, inclusive of touchscreens, light, sound as well as video.

The execution of the Science Pyramid was a result of a collaboration between solar energy company, Onyx Solar, and general contractor, GH Phipps.

After completion of the project, Onyx Solar interviewed the parties that were involved in the execution of the Science Pyramid. Here, FC&A looks at the discussion.

Commenting on the design on the Science Pyramid, Brian Vogt, Chief Executive Officer at Denver Botanic Gardens, said: “To Denver Botanic Gardens, great architecture has always been important. The dominant design is Mid-Century Modern; but with the Science Pyramid, we really wanted an icon that would both fit in and exude a charisma that visitors would find irresistible. The building itself, using biomimicry, tells many stories, including a reference to pollinators, about the tectonic plates that formed the Rocky Mountains and, of course, the Sun.

“The pyramid teaches visitors about the main eco-systems of Colorado and explores similar environments around the world. The lighting and vibrations within the pyramid are determined by current weather conditions. The emphasis is on gaining perspective by looking at the microscopic as well as the bigger picture.

“Onyx Solar was great to work with. When we needed a custom hexagonal PV panel, Onyx was the only company that could produce it. Onyx also worked with the design to help finalise the construction documents.”

The complexities associated with a pyramidal shape were highlighted by Diego Cuevas, VP Business Development at Onyx Solar. “Our engineering and fabrication teams designed a fully functional, hexagonal photovoltaic glass with crystalline Silicon solar cells,” he explains. “The solar cells were laid out in such a way that the unit could generate as much electricity as possible while allowing a beautiful design to delight visitors. The PV unit is made of two lites of fully tempered glass that encapsulate the solar cells. The in-board lite has a ceramic frit pattern that matches the rest of the elements of the facade. Additionally, all the bus bar ribbon was hidden so that it couldn’t be seen.

“Working with GH Phipps, the general contractor of the project, was a great experience. They are professional and demanding, trying to keep all trades coordinated for the successful delivery of the project. Besides them, Burkett Design, the architect practice, and Studio NYL, the facade designers and structural engineers, were great to work with. They completed a unique design, featuring a blend of building materials that enhance the architectonic value of the building. It is always great to work with forward-thinking firms as they are. Regarding Denver Botanic Gardens, they now count on state-of-the-art facilities to delight their visitors. It is a must-visit. We appreciate the opportunity we were given to contribute with our footprint, which allows us to balance the many variables on facade projects to arrive at the most effective design and construction solutions.

“We believe today the Denver Botanic Gardens has more to offer to its visitors. The design and construction works undergone have set them as one of the most innovative gardens to visit in the country. Regarding our contribution, we believe that visitors will be delighted when they get there and notice that hexagonal pieces of glass from a facade can generate free, and clean electricity. We are demonstrating the evolution of the solar industry and showcasing smart alternatives to traditional PV panels, and traditional facade materials.”

Will Babbington, Facade Performance and Design Director at Studio NYL, added: “As a key element to the architectural design of the pyramid was the biomimicry – the building’s form is derived tectonic plates or a sprout breaking the surface and the cladding panels’ hexagonal shape nod towards the geometries of the honeybee – it was fitting that the facade’s rain screen system’s layers protect itself from the elements in a manner found elsewhere in nature, such as a tree canopy.

“As Studio NYL was also the structural engineer on the project, we had the good fortune to integrate the structure and facade to work in concert with one another. Four layers of structure and skin afforded structural efficiencies as well as continuities in the thermal, air and moisture control barriers. The primary challenge of this rainscreen was the selection and connection of the layers’ components. As this rainscreen is oriented towards direct exposure to weather – the sun’s ultraviolet rays, rain, snow and wind – the components were required to be especially resilient. The fibre-reinforced cement (FRC) panels selected had the strength, stability and moisture imperviousness to withstand these harsh elements. In the case of Onyx Solar’s PV panels, the product not only stands up to the solar exposure, but it embraces the sun’s rays. Connecting all of these layers together while minimising thermal bridges was accomplished by intermittently spaced fibreglass thermal spacers supporting two layers of corrosion-resistant subframing. Careful design and construction of the subframing’s alignment was rewarded with ample surface on which to set the cladding FRC and panels.”