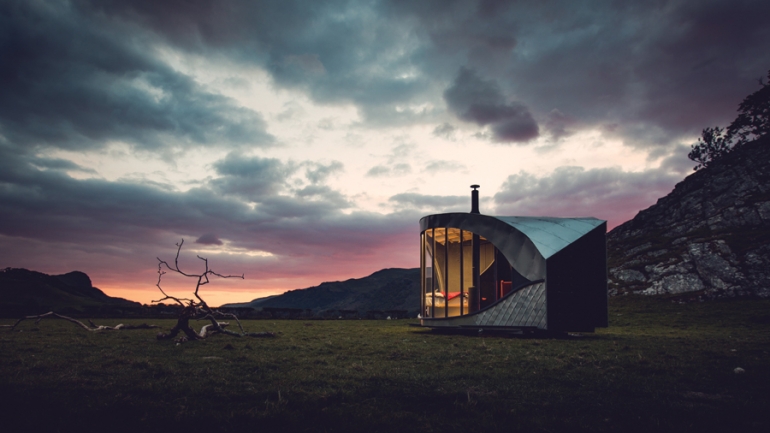 ith an £11k budget, the show’s contestants received a brief to design a cabin no larger than the average caravan comprising a kitchen, bedroom and bathroom – and the results are far from the age-old cabin designs of yesteryear. Designed and built passionately from scratch with traditional joinery, Carwyn’s Dragon’s Eye model boasts true innovation and creativity. Taking inspiration from the ‘Welsh Dragon’, which appears on the flag of Wales, the design centres around, as the name suggests, the eye of a dragon.

As a Master Carpenter, Carwyn teaches carpentry at Welsh eco-centre, the Centre for Alternative Technology (CAT). His carpentry knowledge and skills are evident in the design and delicate craftsmanship of Dragon’s Eye. Unlike many of the other contenders competing in Cabins in the Wild – who have appointed structural engineers, builders and fabricators to assist with their build’s design and construction – strong-minded Carwyn completed the design, modelling and build single-handedly. Finding it difficult to put a pen to paper, the build process began with a self-built one-to-ten model. Operating from his scaled-down model, Carwyn’s build process commenced in his workshop, forming the assembly of the 5.7 x 2.7m structure.

The first port of call for Carwyn was to achieve the complex curved silhouette of his design to ensure it passed the relevant building certifications. Amongst the build’s other complexities was the curvilinear window sill and detailed latticed roof. Working with 500m of timber for the roof alone, Carwyn hand-cut, laminated, glued and temporarily bolted a series of battens and then left the entire structure to dry. With a positive attitude, three weeks later, Carwyn’s sinuous curved-shaped roof resembled the desired arch of an eye.

With the framework finalised, Carwyn’s attention moved to the exterior detailing. To resemble the scaly aesthetic of a mythological dragon, he searched for an appropriate building material to meet both his aesthetic and functional requirements and found waterproof stainless steel to fit the bill. Unfortunately for this master craftsman, the required diamond-shaped stainless steel panels he sought were unobtainable, however, in Carwyn’s world of endless possibilities, he proceeded to cut out 300 individual rhombic dragon scales to clad his cabin.

The window of opportunity

Initially, Carwyn envisaged the eye’s glazing to be formed as one full-height monolithic sheet of curved glass. However, after investigation he realised that this would be a problematic and costly installation and decided to apportion the glazing into 10 floor-to-ceiling double-glazed units, with mullions ornamentally framing the 10 individual elements and complementing the eye’s form. Looking as it’s a fully glazed wall, these 10 units act as a centrepiece to the dragon-inspired design and offer spectacular views from within – as a dragon would perceive the neighbouring landscape.

Inside, Carwyn’s impressive innovation continues with the incorporation of all the creature comforts a guest would expect from a traditional cabin for a comfortable night’s stay – a kitchen, bedroom and bathroom – in the confined space of an average caravan. While the internal design of the eye catches one’s attention instantaneously, central to the interior is the bed’s design – which is equally impressive. Carwyn’s consideration for seclusion in the open countryside has been realised in the design of a 1970s-style round rotatable bed which fits in the space effortlessly. Here the headboard revolves to open up or hide away the impressive landscape when guests require privacy.

After three months of arduous labour and countless hand-crafted hours, Carwyn’s Dragon’s Eye was transited a nail-biting 100 miles across Wales to scenic Snowdonia. Presently situated against a rock-strewn backdrop, the whole form catches the light and reflects its natural landscape. The idea for Dragon’s Eye was to place the cabin next to a mountain giving off the appearance that the legendary creature is hiding within the mountain. However, the structure currently acts as the profile of a dragon’s frame with the eye positioned to act as the mythical beast’s vision.

The similarity between Carwyn’s original one-to-ten, scaled-down model is almost indistinguishable looking at the full-size build. The model’s complex curves and forms conceived in Carwyn’s initial prototype can be found like-for-like. The roof’s stainless steel colour complements the surrounding vista, blending into the tones and textures found within nature’s form.

Truly going back to basics, this project is an exemplar of what can be achieved with a vivid imagination and the right skillset. While the finished article is truly spectacular with its complex curves and forms, what perhaps is more extraordinary is the absence of any CAD programmes from Carwyn’s development – as well as the fact that this was a one-man job.

Dragon’s Eye beat off stiff competition within Cabin in the Wood’s first episode and is set to compete in the final against six rival designs to attain first prize. The adjudicators judged the concept on its quirky design, comfortable interior – complete with a walk-in wetroom, clad in reclaimed slate tiles – and overall craftsmanship.