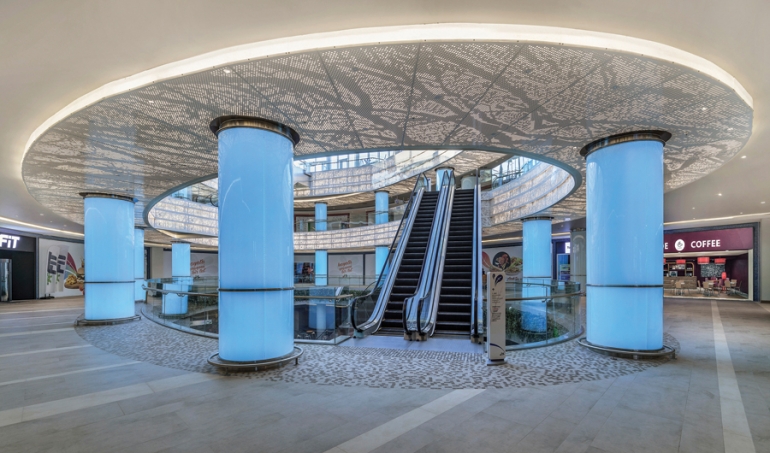 The city of Istanbul has welcomed the addition of a new, out-of-this-world dining, shopping and entertainment complex. Watergarden, located in Istanbul’s Atasehir district, focuses on gastronomy, retail and entertainment.

ompleted in 2016, Watergarden is owned by the Ziylan Group. The apparel and fashion group serves 355 shops including FLO, Polaris and Sport in Street throughout Turkey and exports to 25 countries around the world – including Germany, Albania, Macedonia, Ukraine, Russia, Georgia, Azerbaijan, Turkmenistan, Tunisia, Libya, Iran, Kuwait and Lebanon.

The group’s Watergarden scheme was designed by Netherlands-based design firm, T Concept – which specialises in placemaking – while the spatial, innovative organisation and spectacular interior design was undertaken by Gorkem Volkan Design Studio. The cutting-edge design of Watergarden puts it in a league of its own, moving away from the stereotypical shopping malls seen across the globe.

The main focal points have been specialised for refreshments and recreational functions, which have a balanced, spatial organisation in open, semi-open and closed spaces.

Each of the several units at Watergarden differ from one another across a floor space of 165,000m². These units individually play host to various activities organised by Watergarden, including dazzling water, laser, light and fire shows as well as children’s adventure parks and street scenes filled with delights.

Elsewhere, the performance pool, covering an area of 5000m², was designed with the aim to be the project’s visual and functional focal point. Various areas around the pool have been designed to generate different atmospheres relating to each customer’s user profile. Additionally, the City Park, designed by DS Architecture, is an important part of the project that is surrounded by plants and trees and covers a 15,000m² area of land.

The Watergarden project required a different design approach from a conventional shopping mall. The project demanded different functions that are merged into a single structure for different user profiles. The entire space has a cellular, spatial organisation consisting of independent identities. The most difficult part of the project was to create a harmonic relationship between these different atmospheres, contrary to the typical shopping mall design approach, which becomes obsolete in this case.

The restaurants have been placed on one side of the pool, while bistros are placed on the other side. The other areas within Watergarden, just a stone’s throw away, have been branded the ‘Organic Market’ and ‘Nostalgia Street’. Both these areas have different atmospheres and functions and are continuously linked to one another with alternative routes and pedestrian paths for wayfinding. This has resulted in the Watergarden project embracing a horizontal hierarchy in its interior organisation, differing from other shopping mall design standards.

As also seen in other MDArch Architecture projects, the surfaces are fairly fixed to the existing structure and the coating materials are selected as perforated metal, natural wood and stone that are easy to attach or to replace.

Starting from the Organic Market to the botanical garden floor, the whole section of the building is visually connected. The elliptical gallery not only contains the escalators, but also has a kinetic sculpture – also designed by MDArch Architecture.

In the first steps of the design process, Organic Market and Nostalgia Street were evaluated both for the visiting guests and the people working within. The aim was to offer a feeling that the spaces were already standing before the Watergarden project commenced via choices made with regards to material, texture, colour and dimensions.

The surfaces that are part of Nostalgia Street were chosen with the intention to not appear as decorations, therefore, carefully patinated, natural materials were specified. To keep the atmosphere close to a typical market street in any city, the street dimensions – in cross sections – have been kept as narrow as possible. The guests were evaluated as a parameter for the design, as well as the residents and employees.

The transiency is emphasised in the Organic Market field to keep it similar to a typical neighbourhood market. All the structural parts in the field are designed from cast iron, therefore, there won’t be any marks or damage left on the field when the whole structure is removed. The essential components of this neutral field, which will keep the place alive, are regarded for people and their relations, so, the aim was to create an independent atmosphere that will host these relations.

Considered as an important centre for refreshments in the Anatolian part of Istanbul in the future, the Watergarden project also includes an 11-hall cinema complex, a flexible event venue that can host 4000 people, a theatre venue, entertainment clubs, a culinary arts school for both children and adults, sports centre, playground for children and a kindergarten.