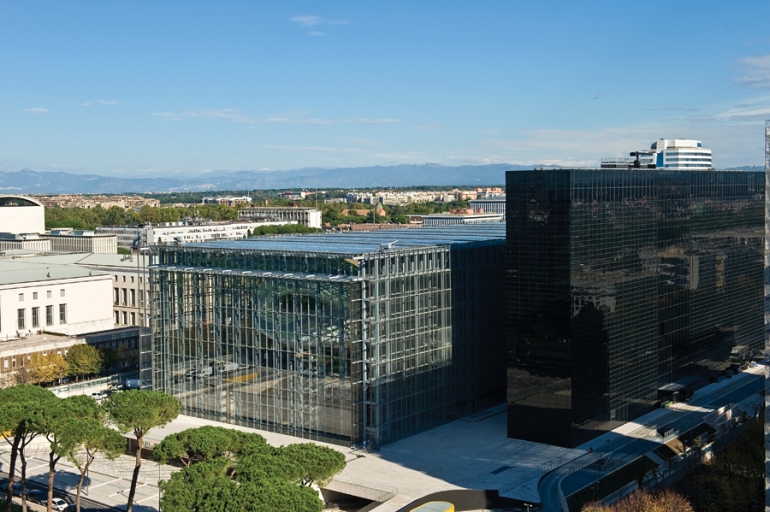 Studio Fuksas completes largest building in Rome in over 50 years

Italian architecture practice, Studio Fuksas, has completed the largest building in Rome in over 50 years. Opening to the public in October 2016, the New Rome/EUR Convention Hall and Hotel is an eco-friendly, earthquake-proof complex that has taken 18 years of planning and construction.

n 1998, the municipality of Rome, with Eur S.p.A, held an international architectural competition for the design and construction of a convention centre between Viale Cristoforo Colombo, Viale Asia, Viale Shakespeare and Viale Europa. Massimiliano and Doriana Fuksas’ design was selected by a highly-qualified jury chaired by Norman Foster.

Characterised by innovative logistical solutions and by the choice of technologically-advanced materials, the highly-flexible complex is able to host congresses and exhibition events with a capacity of nearly 9000 seats divided between the auditorium inside the Cloud, that could accommodate 1760 people, and large conference rooms with a total of 6500 seats.

The complex is located in the Eur district. Designed to respect the original street plan through its simple and orthogonal lines, the complex pays homage to the 1930s rationalist architecture of the surrounding context. From an urban point of view, the design choice was meant to expand the available public spaces to the surrounding district. The building is an international convention center, its insertion in the urban fabric is autonomous in a way but it keeps a kind of relationship with it.

The new complex is composed by three main elements:

The basement has two main areas: a congress and exhibition space, as well as the concourse containing support spaces.

The concourse is the main distribution strip for the functions located in the underground floors. From the basement, room A and B can be accessed either in their standard configuration, or divided into smaller rooms through mobile partitions. The concourse creates a direct connection from Viale Cristoforo Colombo and Viale Shakespeare, creating a functional linear system.

Along this axes many functions are located, such as two cloakrooms, the info points, post service rooms, toilets, services for the workers and technical rooms.

The two main conference rooms are conceived to be used for conventions as well as exhibitions. In addition, along the concourse, there are four 100m2 rooms for smaller meetings capable of holding 100 people.

Conference room A, the larger of the two, can host a maximum of 5000 people and can be divided in three smaller rooms using mobile partitions. In addition, room A is equipped with security and translation rooms. Access from room A is provided from the main staircase on Viale Cristoforo Colombo which opens onto the foyer and the concourse.

The foyer can be seen as a filter space between the inside and the outside. The main foyer, together with the main staircase on Viale Cristoforo Colombo, can be utilised from room A in case of large events with more than 5000 people.

Conference room B, the smaller of the two, can host 1500 people, be accessed from the concourse and be divided in two smaller rooms.

The main entrance is located on Viale Cristoforo Colombo, through a partially protected staircase that provides access to the foyer from which you can access room A or the concourse.

The staircase, together with the foyer and concourse, are conceived as flexible spaces which allow the interactions between the visitors and the various activities inside the complex.

The Theca is a protected space containing the Cloud, which encloses the auditorium. It is placed nearly at the centre of the site, creating two public zones behind and in front of the building. These spaces are essential and symbolise the interaction between the city and the Convention Center.

The glazed surface, viewed from Viale Cristoforo Colombo, allows one to view the Cloud inside and, at the same time, the giant travertine staircase, which is a embodied in the surrounding urban fabric.

The structure is defined by six Vierendeel portals, composed by a cross-connected lattice structure, with a 33m span between them, and a span of 66,00 in the main facade with a total height of 39m. This structure is the main support for the facades and the roof.

The longitudinal outer facade consists of a system of laminated glass panels, 1.650 x 4.190mm, built upon aluminum profiles; these perforated panels are drilled to ensure the aeration for safety stairs.

The longitudinal inner facade is a continuous glass system composed of vertical and horizontal retractable aluminum supports. These glazed panels are made of double glass with a layer of air in between.

The glazed facades are composed of uprights and cross retractable steel sections, as well as glazed module panels 2.083 x 4.190mm.

The contraposition between the Cloud, which is the heart of the project and is defined by an organic geometry, and its container, defined by the Theca underlines the comparison between a free spatial articulation, without rules, and a geometrically-defined shape.

The Cloud contains an auditorium with 1760 seats, snack areas and support services to the auditorium. The Cloud is, without any doubt, the distinctive architectural element of the project: defined by a steel rib structure covered by a 15,000m² transparent curtain, creating an extraordinary visual effect.

The Cloud system is independent from the rest of the complex and the activities inside do not interfere with any of the other activities (conferences, exhibitions) taking place in other areas of the building.

The Cloud is supported laterally at points where it touches the Theca with reinforced concrete beams, and centrally by three pillars. Inside the Cloud, connections between the various levels are ensured by escalators and walkways. The auditorium is composed of mesh-lined rectangular panels of polyethylene inside, and outside with wooden planks.

The hotel is conceived as an independent and autonomous structure. With its 17 floors and and a height of 56m, it accommodates 441 rooms, including standard rooms and luxury suites located on the upper floors. At the underground level of the complex there is a 600-place parking area.

The design of the New Congress Centre is distinguished by its eco-friendly approach – a series of innovative choices meant to reduce energy consumption using the energy produced from renewable sources and the elimination of the emission of polluting substances like greenhouse gases.

The production of hot and refrigerated water for the air-conditioning of the whole complex will be carried out by reversible heat pumps, energy-balanced by geothermal exchange. This system is capable of achieving high-energy performances, with a substantial reduction in electricity, especially for summer air-conditioning.

On the roof of the Theca, photovoltaic modules are assembled to ensure full architectural integration. The photovoltaic elements will enable the production of natural electric energy and, at the same time, contribute to the protection of the building from overheating through the mitigation of solar radiation.

The majority of the air-conditioned rooms are located underground, and therefore protected by the summer sunshine and by the winter wind and cold. The air handling machines are variable to allow minimum consumption of energy, for the effective crowding and temporal use of the places.

The energy contained in the air-conditioned areas are integrally salvaged, with the indirect passive air-conditioning of the big Theca and the access rooms.

The complex is designed to be connected to the future power station for the cogeneration in biofuels, Europa, for the simultaneous production of electrical and thermo-frigorific energy, planned within the Smart Grid project of the new Eur masterplan.

When fully operational, the basic power load of the Eur New Congress Centre will be supplied by the power station of cogeneration, and the subsequent power load by the geothermal and photovoltaic system. The mutual independence of these systems ensures that the complex is able to function in any instances of a technical failure.

The centre’s eco features also comprise a rainwater harvesting system, where exterior panels collect rainwater and filter it into a storage tank. The water can then be pumped, on demand, from the tank to the internal water system.