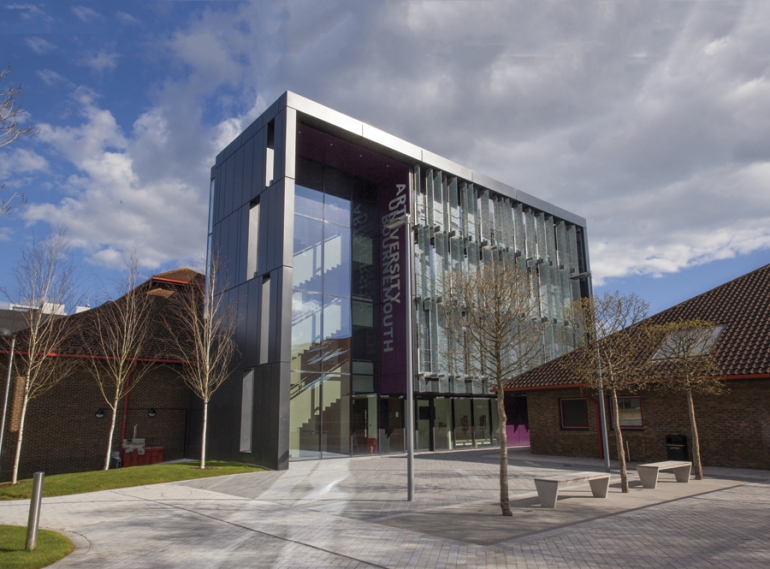 Drawing is a basic human instinct. But what creates the perfect environment in which to put pen to paper? How important is harnessing the best quality of light? What other elements need to be considered when creating a drawing studio?

onstruction and infrastructure company, Morgan Sindall, has continued its partnership with Arts University Bournemouth to deliver the first purpose-built drawing studio in the UK for more than 100 years.

The freestanding steel pre-fabricated pavilion was specially designed to stimulate creativity by influential architect, AUB alumnus and Honorary Fellow, Professor Sir Peter Cook RA and his office CRAB (Cook Robotham Architectural Bureau) and was opened earlier this year by renowned Architect, the late Dame Zaha Hadid. The structure was the first building in the UK to be designed by Sir Cook’s CRAB Studios and its pre-fabricated pavilion was imported from Germany. The unusually-designed building was awarded a national Royal Institute of British Architects (RIBA) accolade and was created using bridge-building technology, whereby a curved, painted structural steel skin was used to create its fluid form. The building also won a Local Authority Building Control (LABC) award for Environmental Building of the Year.

Jon Daines, Area Director for Morgan Sindall’s Poole office, said: “Morgan Sindall has enjoyed a highly fruitful, inspiring and stimulating partnership with Arts University Bournemouth. This has seen our project teams join forces with the University and project partners to deliver highly-innovative, and often technically-challenging campus buildings – all with the aim of developing spaces that will create the very best environments for university users.

“Working on the Drawing Studio has been a particular highlight for our team. We’re delighted to have delivered this beautiful, award-winning scheme for the university. One of the most significant challenges for us was how to assemble the structure on site. This included looking at the best way to support individual sections in their temporary state, how to plan and sequence the lifting operations, and how to access the structure for welding and painting once erected.

“The sections were craned into place and bolted to the raft slab foundation on pre-set, holding-down bolts. Temporary support for each section was provided by steel props, bolted to the slab and pre-set at the correct height to receive the top of the curved section being lowered into place.

“The building is a unique asset to the university and celebrates the importance of drawing to the creative process and the realisation of original creative work. This project has involved close partnership working between our project team, the architects at CRAB Studios, and the prefabrication team in Germany and it’s very rewarding to see it completed and in use.”

The Drawing Studio’s expressive design and striking blue facade stands out against a neutral campus backdrop. The building was designed to reach out to creative students on an individual basis and is a space shared by students from a range of courses including animators, architects and etchers to costume designers.

Its design celebrates four aspects of light – central to observation and drawing. It includes a north-light, which is traditional in studios, a rear clerestory window light that gives a softer light, a discrete light that filters under a bench on the east side of the building, and a graded wash of light that feeds in along the curved entrance.

Professor Stuart Bartholomew CBE, Principal and Vice-Chancellor, AUB, commented: “The Drawing Studio provides students with a new space in which drawing can be taught and practiced. We believe the simplicity of the monocoque construction allows the act of drawing to become a calm and considered activity within the lively world of a very busy, creative institution.

“The project is part of the university’s broader vision to update its campus facilities and provide a stimulating world-class environment for its students, so that the campus can continue to fulfil its role as an environment that helps to foster creativity and artistic excellence in its students.”

Morgan Sindall has delivered several of the innovative buildings which make up the remarkable campus. The four-storey Photography Building, which forms a new gateway to the AUB campus, is one example. Directly adjacent to the existing photography department, the building’s design has been informed by photographic processes. Its principle facade features an array of digitally-printed fins that act as filters which reflect, and moderate, daylight into the building’s interior. The building is a black box with apertures forming the roof lights, windows and ventilation louvres. This allows controlled natural light and air to flow through the atrium and circulation spaces, providing low energy environmental control.

Alongside the commitment to delivering environments and facilities which stimulate creativity, the university was focused on ensuring the new campus developments were energy efficient. As such, Morgan Sindall worked with AUB to deliver two art studios which met one of the world’s most exacting environmental standards – Passivhaus. The Passivhaus concept was developed in Germany more than 20 years ago as a way of introducing energy-efficiency into the construction process, to reduce long-term costs and encourage sustainable best practice.

The 13,272ft2 studios are Dorset’s very first education buildings to meet the standard and Morgan Sindall was able to achieve the highest level of air tightness recorded in the UK to date on the development. The buildings are being used for a variety of courses and have north-facing windows, to reduce glare into the studio space. Other key projects which Morgan Sindall has delivered for the university include the futuristic Student Services Department and the Student Union, which won a regional RIBA award. The £2m two-storey facility was completed in November 2014 and links to the striking Facilities Building, which features a sculptural steel canopy. The development is highly sustainable and is Passivhaus accredited. Completed in July 2015, it acts as a new “front door” to the campus, creating a portal access across the main entry and spine road.

Morgan Sindall has also delivered renovation works to several buildings at the AUB campus, including a remarkable £700,000 live site project to design and build a rooftop extension on an existing three-storey teaching building, and two halls of residence conversion projects totalling £7.9m. The Morgan Sindall project team transformed both out-dated halls of residence buildings into two state-of-the-art dedicated teaching spaces for a variety of courses.

The company continues to work alongside the university to update and revitalise its estate and deliver outstanding contemporary and sustainable buildings – creating the very best environment possible for students to create and thrive.