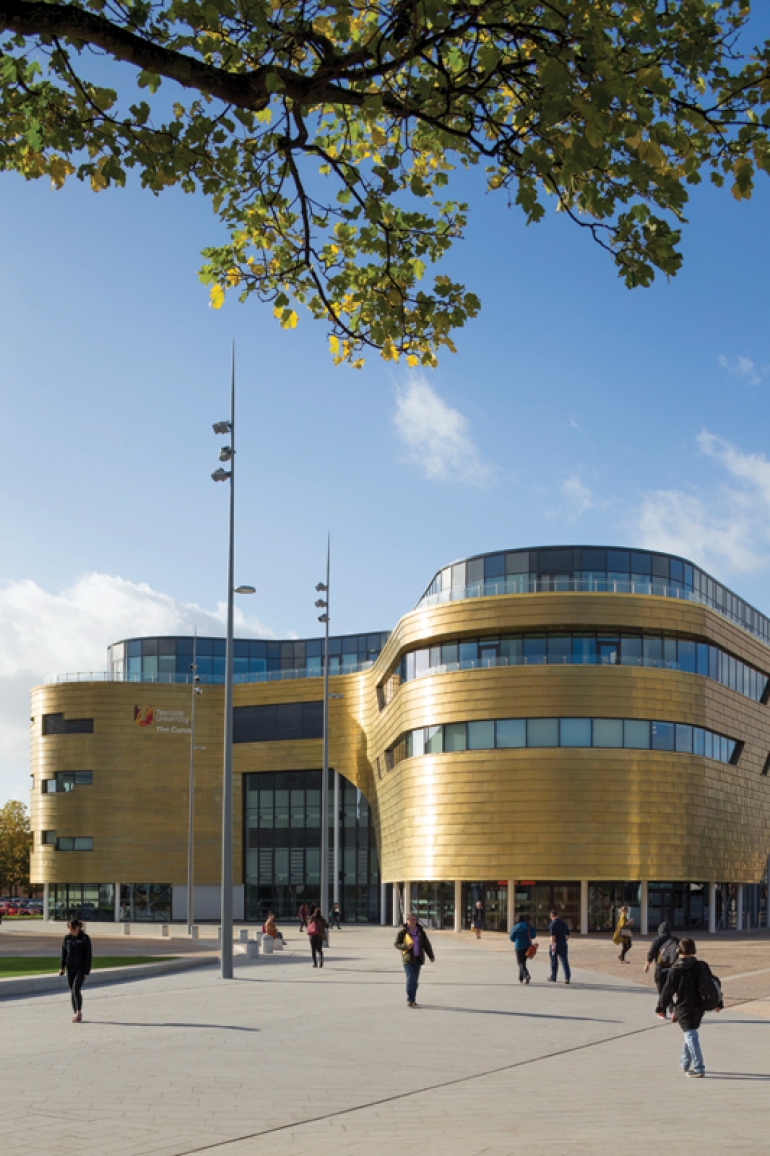 Austin-Smith:Lord’s new Teaching and Conference Building, at the heart of Teesside University’s campus in Middlesbrough, is defined by its golden copper alloy cladding, reports Aurubis.

he new Teaching and Conference Building – known as The Curve – forms part of Austin-Smith:Lord’s competition-winning design for a unique environment at the centre of Teesside University. It includes an extensive public realm, innovative lighting, a living wall with giant LED screen and landscaping across the newly pedestrianised campus. This new ‘Campus Heart’ aims to rival any new university in the country or indeed Europe.

Austin-Smith:Lord said: “The brief from Teesside University was bold. They wanted a striking building in a compelling setting, which would be both an exemplary environment for students and staff, and an iconic building. It needed to convey the university’s values and ambitions, and attract students over decades to come. The new building is about more than just upgrading the facilities. It has a strategic purpose to raise the profile of the university and project its aspirations and values by providing an exemplary environment for students and staff.”

The new building’s teaching block and 200-seat auditorium are linked and expressed by a curved facade that wraps around the north, east and south elevations, embracing the western end of the ‘Campus Heart’. Expressing each of the building’s elements separately gives an opportunity for a bold and striking composition, especially as the auditorium is able to ‘float’ at first and second floor levels, allowing the ‘Campus Heart’ landscape treatment to flow under it and into the building. Where the teaching block cuts back at ground level, a triple height concourse is formed from fully glazed curtain walling.

The facade materials have been influenced by considerations of both existing context and an ambition to create a landmark building with a strong and – possibly – unique identity. Austin-Smith:Lord added: “The form of the building is expressive and exciting and works to create a spatially successful place.

In terms of materials, the campus already has a variety of approaches, with different generations of buildings displaying markedly different palettes – from the red brick of the earliest buildings through to the cladding panels of the Student Union and Student Centre, then the more variegated materials, zinc, timber, curtain walling of the most recent buildings.

“The overall impression of the ‘tonality’ of the buildings immediately facing what would become the new ‘Campus Heart’ is that the major buildings are predominantly light in colour. But we felt that mirroring this might not re-define the character of the existing space vigorously enough. There are also practical concerns of both cost and maintenance to take into consideration with regard to choice of materials. The boldness and clarity of the form of this building will create an impact that is – to some extent – independent of material choice. However, the desire for identifiable, landmark buildings that are fresh, exciting and unique suggested we should be bold in our choice of materials.

“The form, functional requirements and construction of the ‘solid’ parts of the building suggested a form of metal cladding with horizontal seams highlighting the curvilinear plan form. We chose to use Nordic Royal golden copper alloy cladding that will easily form the curved wall surfaces and accommodate the shaped cut outs for windows. The golden copper alloy brings an additional warmth and texture to the new ‘Campus Heart’ with a material that will maintain its high-quality appearance with negligible maintenance.”

In May 2016 it was announced that The Curve had taken top honours – ‘Project of the Year’ – at the RICS 2016 Awards, North East, where the judges praised it for being visually striking. It also won two of the remaining eight categories – ‘Design through Innovation’ and ‘Regeneration’.