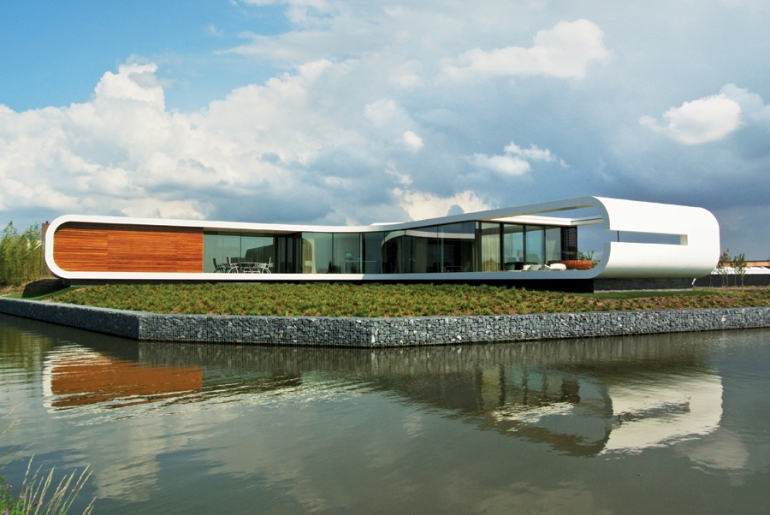 DuPont Corian has created a sleek and sophisticated facade to wrap a private residence in enduring elegance.

spectacular new waterside home in the Netherlands is distinctive in many ways – not least because of its innovative use of DuPont Corian high-tech surface to create a cocoon of enduring elegance. Corian has been valued for many years by architects and interior designers for its multiple talents and its famously robust reliability.

These qualities are now increasingly being adopted to form high-impact, low-maintenance exterior facades. For Villa New Water, Corian in the classical Cameo White colour has been ingeniously applied to wrap an intriguingly shaped structure, from floor to walls to roof, including an open-air terrace with cutaway sections to let the sun and breeze flow in. Corian also features within the interior, in kitchen installations that echo the organic shapes of the building.

Resistant to moisture and weather

Architect Koen Olthuis from Waterstudio.NL in Rijswijk explains his choice of material: “Building on a waterfront involves special building requirements and Corian is the ideal solution for such difficult conditions.

After a time, stucco work always becomes unsightly, but this product is completely impervious to moisture and the effects of weather. Decades from now, this facade will still look as good as it did on the day it was installed. It is practical and efficient, even for buildings that do not have to withstand waterfront locations.”

Equally important in this instance, was the ability of Corian to create some ‘special effects’. The client wanted the villa to be something unique, a house that would still be modern in 50 years’ time. The architect therefore designed a dramatic structure with distinctive curves that are ‘seamlessly’ wrapped in Corian.

He adds: “This material is so inspiring, I’m discovering new possibilities all the time.” Fortunately the client – who wishes to remain anonymous – was equally keen on the concept saying: “For the exterior, we didn’t change a thing.”

As an architect, Olthuis is always looking for the best balance between design and product. “Perhaps it’s because of my background in industrial design,” he explains. “Corian allowed me to realise the building exactly as I had envisaged it: with a seamless appearance and without distracting details such as eaves, window frames and roof overhangs, all things that take attention away from the real essence of the structure.”

The ‘curve appeal’ of Corian has been used in this project for both horizontal and vertical, interior and exterior surfaces, from sunscreen casings to kitchen countertops. The effect is at once pure and minimalistic, while also being strikingly unusual.

With such a large amount of Corian involved, the villa was no ordinary construction task for the builders, Van Leent Bouwbedrijf. However, the contractor was skilled in the fabrication and installation of Corian and knew precisely how to apply the practical possibilities of the material to full advantage and thus was able to realise this very challenging project both on time and within budget.

Corian has earned a reputation for being practically indestructible, and these qualities are especially useful for exterior installations. This completely solid and homogenous material is stain resistant and non-porous, thus the worst of the weather will have no effect on it. It is also very easy to clean.

“These facades are completely smooth. In years to come, they will still look like new,” promises Olthuis. And during this time, none of the usual exterior home maintenance, such as rendering, plastering, grouting or painting will be needed. Longevity is key to sustainability, but the environmental benefits go even further because Corian can also be restored on site, if necessary, in most cases… or removed, re-formed and even reused elsewhere, although it is unlikely that unless the unforeseen happens, that this particular facade will need to be repaired.

Apart from the star performance to the exterior, Corian also plays a noteworthy supporting role to the interior. Here, Koen Olthuis has designed an impressive kitchen island with cantilevered breakfast bar, again seamlessly wrapped in this malleable material. “Corian is resistant to water, acidity and high temperatures, and is therefore well-known for being perfect for a kitchen,” he says.

The faces of kitchen cupboards have also been formed from the same sleek and sophisticated surface. In chic contrast to the smooth finish of the Corian surfaces, various panels within the design have been fitted with a soft padding effect.

The kind of sensational exterior use of the material as seen at Villa New Water, is part of a growing trend internationally to cover structures from commercial buildings to private residences in the long-lasting beauty of Corian. In the UK projects include the award-winning Lens House by Alison Brooks Architects, Mentmore Terrace apartment block by USE Architects, and most recently, the impressively illuminated Motel One Minories by Mackay + Partners in the City of London.